Dandy Warhols drummer Brent DeBoer channels the hushed sorrow of the sixties & seventies on his solo release, 'The Farmer'. ... 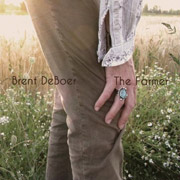 When a successful band’s drummer releases a side-solo record, you really don’t know what to expect.  When the singer puts one out, it’s generally a not-as-good version of the original (which can still be good – see Interpol’s Paul Bank’s …Is Skyscraper – QRO review – or just worse – see past-their-prime The Strokes’ past-his-prime Julian Casablancas’ Phrazes for the Young – QRO review).  When the guitarist/main instrumentalist puts one out, it’s generally more experimental, with less of a hook (like the weaker vocals of Death Cab for Cutie’s Chris Walla’s Field Manual – QRO review – or Broken Social Scene’s Andrew Whiteman’s more experimental latest Apostle of Hustle release, Eats Darkness –QRO review).  And when the bassist puts one out, nobody cares unless you’re friggin’ Paul McCartney (or Wilco’s John Stirratt, and even then he had to team up with Pat Sansone as The Autumn Defense – QRO live review).  But the drummer?  Locked behind his kit, at the back of the stage (and there hasn’t been a drummer-singer since Phil Collins or Grant Hart – QRO interview) – who knows what his musical muse is?  So Brent DeBoer, drummer from Portland alt-rock acts The Dandy Warhols (QRO album review), channeling the hushed sorrow of sixties/seventies troubadours makes as much sense as anything.  And he does do it well.

At only eight songs, The Farmer feels more like an EP, but it really shouldn’t have been longer, as DeBoer rarely strays from his sound, a slow, soft, intimate sadness that brings to mind Simon & Garfunkel.  But the harmonies are strong on pieces such as “You Win” and “Is That All”.  And The Farmer isn’t solely one note, as it’s a bit breathier on “Enemy”, slow swingin’ on “My Heart’s a Joke”, and a darker alt-folk haunt to “Sick of Where I’ve Been”; “Sick” particularly brings some change to the release.

The Farmer is little like The Dandy Warhols, save the intimate fuzz being a bit like the Warhols’ lo-fi fuzz.  But as a solo side excursion, it’s singular and special.