<img src="https://www.qromag.com/wp-content/uploads/2009/12/brimstonehowlbigdealwhats.jpg" alt=" " />Fans of garage-rock, hit up an outfit with a proven track record, like Brimstone Howl. ... 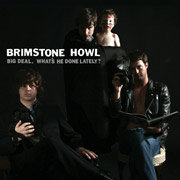 Remember the days before lo-fi garage-rock was ‘the scene’?  Okay, it might not feel like it in all parts of the indie-universe, but in certain sectors, there are more garage-rock party bands employing lo-fi sounds than you can shake a stick at.  But if that kind of music is your bag, how do you enjoy it without having to jump onto this bandwagon, without having to sift through million-and-one new bands that probably won’t be around by next year/month/week?  Hit up an outfit with a proven track record, like Nebraska’s Brimstone Howl.

While the title to their latest, Big Deal. What’s He Done Lately?, might be a line Joey Ramone said about Phil Spector, it’s also rather tongue-in-cheek with regards to Brimstone, as they’ve actually done a lot ‘lately’: an album-a-year since 2005 debut Seven Means Runs, and they’re just as hard-working on the road.  It all comes through on the lo-fi garage of Big Deal, from opener "Last Time" to closer "La Loba".  They don’t exactly reinvent their wheel on the record or from past records, but find times to add country twang ("Easter At the Lewises"), stomp ("Suicide Blues"), cheer ("End of the Summer") and more to their jangly guitars and upswing attitude.

Some of the pieces are naturally better than others – the ‘fi’ is too ‘lo’ on "Final Dispatch", but there’s just the right amount of push & pop to "A Friend of Mine" – and the songs sometimes feel like they’ve got a few too many verses.  But in a year or two, when everyone’s wondering what today’s flavor-of-the-month garage act has done lately, Brimstone Howl will still be the real Deal (and probably have another record or two out, to boot…).