British Sea Power utilize some of their airier, more nature-inspired side.... 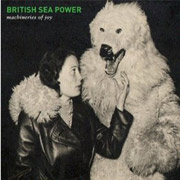 British Sea Power won a cult following with their epic ‘history rock’ in 2003 debut The Decline of British Sea Power and single “Remember Me”, but after that they were often accused of lacking evolution with records like 2008’s Do You Like Rock Music? (QRO review).  Yet recent years have seen the band distinctly stretch, from the garage-inflected Zeus EP (QRO review) to their instrumental soundtrack to Man of Aran.  It came together with the indie-orchestral influenced Valhalla Dancehall (QRO review), and now BSP utilize some of their airier, more nature-inspired side on Machineries of Joy.

For a band that performs with a stage draped in greenery and even a bear (or two – QRO photos), British Sea Power’s music has not veered into the natural sounds seen in so many airy acts.  That did, however, come to the fore on the soundtracks of Man of Aran and more recently From the Sea to the Land Beyond, a film of archival footage of the British coast, and the band has incorporated it into most of Machineries.  The title track & starter opens up onto the British countryside, and closer “When a Warm Wind Blows Through the Grass” brings an ominous seaside wash.  In between, there are some better & worse usages of nature – early songs “Hail Holy Queen” and “What You Need the Most” go too far in the airy direction and away from what BSP do best, but back-to-back later tracks “Spring Has Sprung” and “Radio Goddard” are more effective, with a carry and even a charm.

This is still British Sea Power, and they don’t forget about the rock on Machineries.  The energetic “K Hole” stares down said hole with a grin, while “Monsters of Sunderland” presses forward like only BSP does.

British Sea Power may never get away from whatever labels were put on them early in their career (a common fate for many acts).  But they are growing, upward and outward – and naturally.