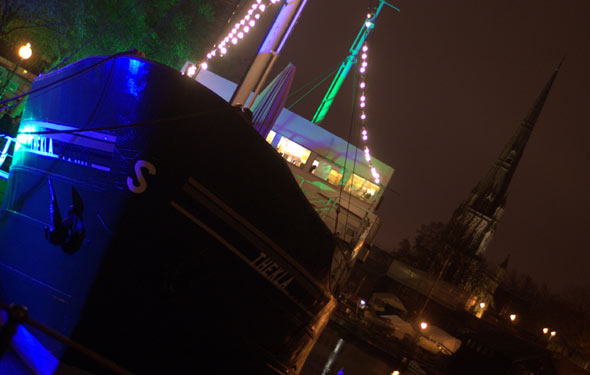 Tuesday, February 8th, the good ship Thekla hosted the BSP 6, who have just released their latest album – Valhalla Dancehall (QRO review).  The Thekla has received a new lease of life as an excellent music venue, just five-minute walk from the Bristol city centre.  The scene of the show was in the belly of this converted Baltic Coaster ship with its 350 capacity.

Support band Race Horses are a four piece from Aberystwyth – Meilyr Jones (lead singer and bass guitar), Dylan Hughes (synths and guitar), Alun Gaffey (guitar) and Gwion Llewellyn (drums).  The Welsh lads already have released an excellent début album in Goodbye Falkenburg, which has been met with rave reviews by various music mags.  Throughout their nine-song set this mischievous, eccentric band created a spirit that’s hard to dislike.  They were tight to suggest that they have already done their share of travelling up and down the country and their songs were varied, well crafted and catchy.

They kicked off with "Man In My Mind", aquirky, sing-along and bounce-along song to get things started.  Hughes’ keyboards fired up, spitting out emanating chimes as Jones unleashed himself upon those who had already arrived at the front of the stage, for a front room view, with Gaffey and Llewellyn flanking the singer with their backing vocals.

Race Horses were going down well with the BSP audience, with regular Bristol gig goer (Jeff) with his frizzy blonde locks head banging away (note: he head bangs to every band at every gig).  Another punter enjoying the show was guitarist Martin Noble from BSP, who stood in the crowd, but wasn’t head banging.  This is not to say that Race Horses are a rock outfit.  Their sound is often likened to that of Gorky’s Zygotic Mynci, but within that you may want to chuck in "Some Space" and "Pulp".

"Pony", also from the début album, was fantastic fun with Jones’ playful lyrics of love and affection – "I wanna be a pony / I wanna be your one and only."  It sent the audiences heart racing to a constant steady beat met in time by Llewellyn’s drums and the keys from Hughes’ keyboards, which had a hint of a ska.

Also available from reputable establishments, the Race Horses have released an EP, Man In My Mind, and from this they played "Grangetown 02920", one minute and 45 seconds of just sheer joy.  Buy this EP & play at parties loud!  If you want to check before you purchase, this track can be found on "Spotify".  Listen and try and not smile.  Brilliant.

"Last Boat To Dover", which Jones explained is about relationships, departures and boats… a bit like the Thekla; fitting indeed.  The band toured Europe last November and they hope to leave Dover shores again before the summer to spread some joy to their European neighbours.

"Cake" from Goodbye Falkenburg gave Gaffey the opportunity to experiment with his stack of effects pedals laid before him, creating mind-boggling sounds from his crimson guitar, all this with continued faultlessness.  The set ended with "Ain’t Nobody Else", which saw Jones clambering around the speakers bringing further interaction and a positive response by the now packed venue.  If you are down in the dumps, had a hard day?  May I suggest you see these boyos live or, failing that, get your hands on "Goodbye Falkenburg".  The additional good news is that in two weeks the gang get started on their second album. 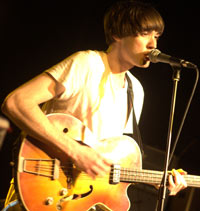 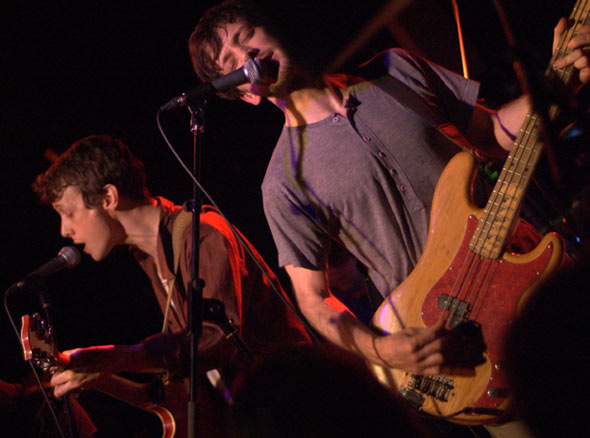 Click here for QRO’s review of British Sea Power at Music Hall of Williamsburg in Brooklyn, NY on May 11th, 2008

The Thekla was now creaking at the sides as the expectation grew with several last minute arrivals scrambling across the decks to try and get a vantage point to see the small stage.

The lights went down, except for three faint red lights.  BSP stages in the past have been adorned with various shrubs and bushes, but tonight the band was embracing the nautical theme with the stage draped with flags.  All this was overseen by some clearly lost stuffed feathered friends, who shouldn’t be this far out to sea, sat on speakers and dotted between guitars and drums.

The six members of BSP squeezed themselves onto the small stage to a warm reception from the landlubbers who had made in on board.  Throughout the set BSP kept the interaction with the audience to a minimum, but this is not to say that the band were not enjoying themselves as the evening continued to get better and better with guitarist/bassists/brothers Yan (Scott Wilkinson – QRO interview) and Hamilton (Neil Wilkinson) swapping vocal duties throughout.

The first two tracks of the evening were from Valhalla Dancehall, starting with the superb "Who’s In Control", Yan asking the questions we would all love answered as everything falls apart around us.  It’s a feisty number, which should be played at all picket lines and protests, whether you are a student or a parent facing redundancy under the Conservatives and their ‘Judas’ Liberal counterparts.

The band has recently asked fans to contact them regarding potential libraries’ to host a BSP gig.  To be fair, we cannot say we were not warned as BSP clearly issued their manifesto within "Who’s in Control" with the lyrics "It’s militant / Not military / Welcome everybody / We’re not all that scary / I’m a big fan / Of the local library / I just read a book / But that’s another story."  Prime Minister Cameron will have a fight on his hand if he wants to close these often striking historical buildings. 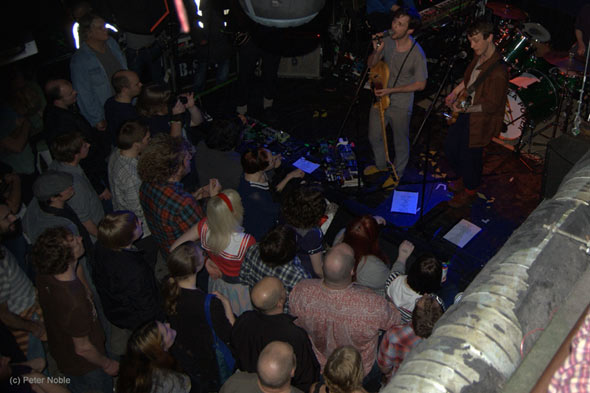 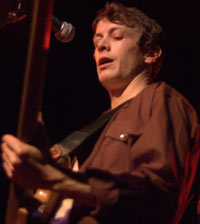 The beauty of BSP is that they are relevant and continue to remain true to their cause over the previous ten years.  They have something to say; it’s not fake or preaching – it’s just common sense and replicating what we are all feeling.  This is evident in "Stunde Null" from the Valhalla album, which specifically refers to the capitulation of the Nazi government, but warns of any complacency.  They have always gone out of their way to play the rock ‘n’ roll game differently, constantly coming up with ideas to try something different and out of the routine, everyday life of a pop/rock group.  Whether that is playing caverns in Cornwall or playing a pub deemed to be highest in Britain, you can expect to find BSP one step ahead.

BSP worked their way through an impressive 21-song set given the 10pm curfew.  They have an impressive catalogue of which to choose from with 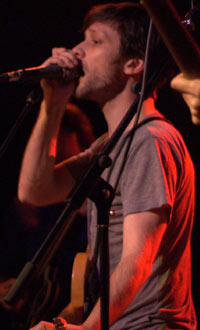 "Apologies", "Carrion", "Waving Flags", "Skua" and "No Lucifer" especially well received, with the latter being met with a football ‘Ultra’ performance from the crammed floor.

BSP cannot be accused of taking it easy, as last year the Brighton-based band released the Zeus EP (QRO review), which holds a gem of a track – "Bear".  Sadly the band didn’t play this tonight, but we were treated to a working of "kW-h" from the EP.  This gave Noble an opportunity to experiment with a ‘voice effects’ device connected up to his mic.

The British Prime Minister who is clearly lacking in original thought has also taken the title of BSP’s final song  "All In It Together" as his "rallying call" (cop out) to the population of Britain to endure all the suffering/cuts he is about to unleash.  He is kidding no one, but tonight as Yan offered his mic to the audience for a sing along, there is a rising number of us that are, but not with those who profess to be "In Control".

The band returned with old favourite " Spirit of St Louis" which rampaged along.  A perfect ending to a perfect night to send us all home fired up and ready to battle with Mr Cameron at a local library near you. 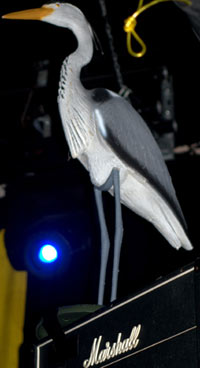 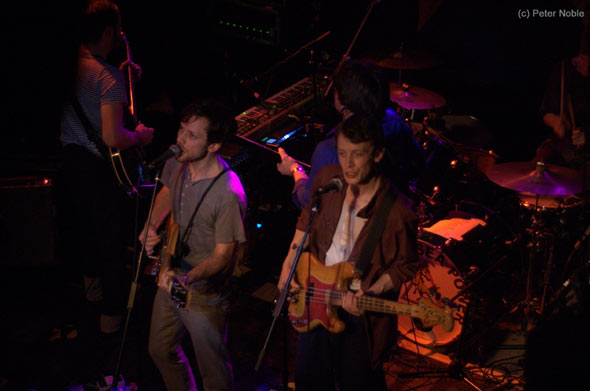