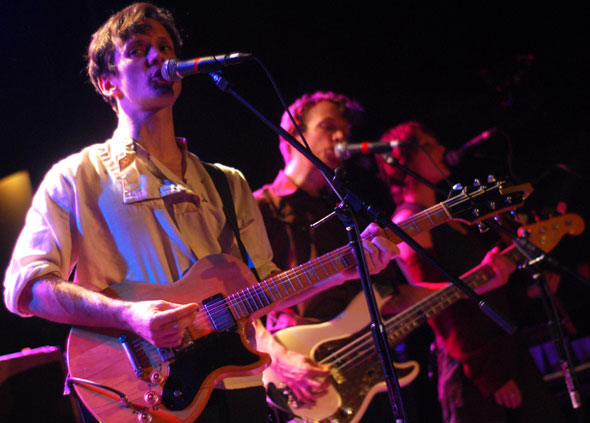 Click here for photos of British Sea Power at Doug Fir Lounge in Portland, OR on April 3rd, 2011 in the QRO Concert Photo Gallery

Sometimes bands mellow, as they get older.  It’s not simply because they’re literally getting older, but also from the wear and tear of the road, especially if they’re not playing progressively bigger-and-bigger venues, but have hit something of a plateau, fame-wise.

Sometimes fans mellow, as they get older.  It’s not simply because they’re literally getting older, but also that shows are less special, more of an effort to make it out to one, and perhaps they drink less.

Neither of these was at all true when British Sea Power closed their U.S. tour at Bowery Ballroom (QRO venue review) in New York, NY on Thursday, April 21st. 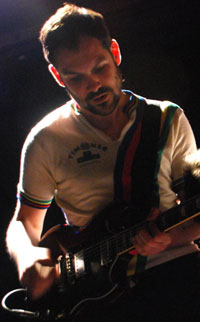 The, yes, British band debuted strong back in 2003 with The Decline of British Sea Power, and especially single "Remember Me", forging an epic ‘history rock’ about such subjects as the 1953 flooding of Canvey Island in the Thames estuary and the assassination of SS chief Reinhard Heydrich, while not forgetting to actually ‘rock’.  In addition to such acts as crowd-surfing and climbing up balconies (by the band), on tour BSP would bring a ten foot stuffed bear, Ursine Ultra, and would end with the semi-improvisational "Rock In A".  The foursome of singer/guitarist/bassists brothers Scott (QRO interview) & Neil Wilkinson, guitarist Martin Noble, and drummer Matthew Wood even added keyboardist Eamon Hamilton primarily for more on-stage tomfoolery.  But Hamilton left to pursue his own solo career, with Phil Sumner coming in on keys, horns, and general utility player.  Ursine Ultra retired as well, though the band did gain violinist Abi Fry.  And their following LPs and EPs, while all strong, never quite matched Decline in quality or success, sometimes feeling like they were just continually doing the same epic thing. 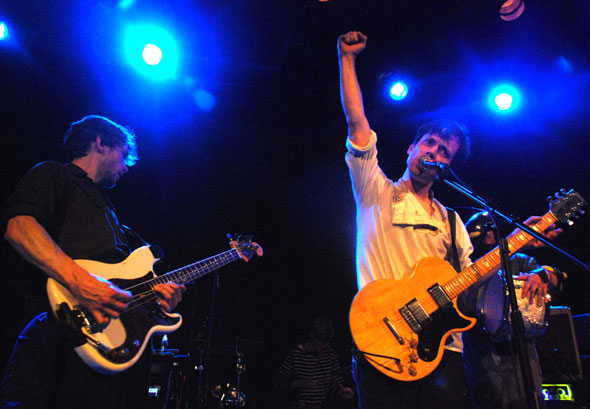 Click here for photos of British Sea Power at Music Hall of Williamsburg in Brooklyn, NY on March 22nd, 2011 in the QRO Concert Photo Gallery

British Sea Power came to America in March and April touring behind their fourth full-length, Valhalla Dancehall (QRO review), having last graced the shores back in 2008 when touring Do You Like Rock Music? (QRO review) – despite their naval name, BSP don’t cross the pond that often.  The tour started & ended in New York, beginning on March 22nd (QRO photos) – right after South-by-Southwest (QRO recap) – at Bowery’s sister venue, Music Hall of Williamsburg (QRO venue review), where the band played back in 2008.  But unlike that show (QRO live review), there was no crowd-surfing or balcony climbing (as Noble had done back then – QRO photo), and it didn’t end in a scrum (QRO photo) – the most there was then was one fan climbing on stage during "Carrion" (QRO video), and he was politely and easily led off stage.  Shows out west, including Portland (QRO photos) and in Iowa City for Mission Creek Festival (QRO live review), similarly had great music, but also likewise lacked the wildness. 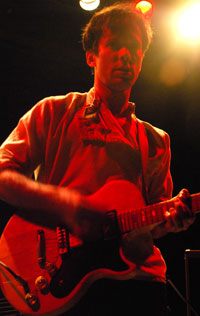 At Bowery, however, British Sea Power let it all hang out.  The crowd was more excited from the get-go than the one at Music Hall the prior month (though a number of people were at both – including the stage-climber from Music Hall & his friend), with Rock Music‘s "Lights Out For Darker Skies" and "Atom" lighting up more.  But it was impressively the new songs that followed, Valhalla‘s "Who’s In Control?" and "We Are Sound", with the crowd joining BSP in "Control" chorus line, "I wish protesting was sexy on a Saturday night!" and pro-library advocacy (the song’s about the cuts to public libraries by the current Conservative/Liberal Democrat coalition).  The band went forth crossed frozen landscapes with "Oh Larsen B" (from sophomore LP Open Season, and about the collapsed Antarctic ice shelf) and the new "Luna", before Decline made its first appearance in "Blackout" (there was also a rather muddled happy birthday to someone whose name the band disagreed on, ending with, "If it’s your birthday tonight, happy birthday…"). 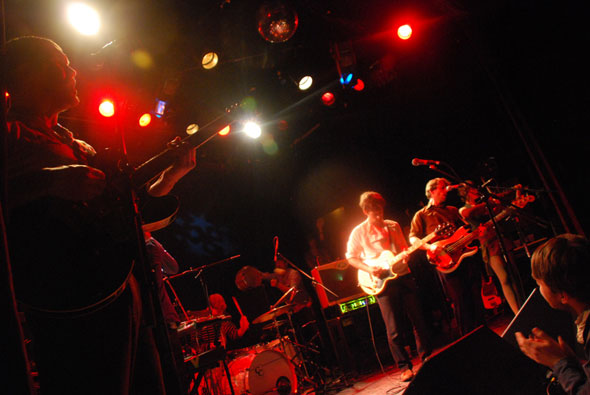 However, then the band made pretty much their only misstep of the night, slowing and shrinking things down with Valhalla‘s "Baby" and "Once More Now".  While not bad songs, they really wasted the energy that British Sea Power had been building the entire night.  It took two great singles, Open‘s "It Ended On an Oily Stage" and Valhalla‘s "Living Is So Easy" to restart things.

But soon the show started to go nuts.  Two English (or possibly Irish) fans (including the Music Hall stage-climber) had been chanting "Easy!  Easy!", the chorus line to Rock Music‘s "No Lucifer" (taken from U.K. wrestler Big Daddy…), pretty much from the start of the show – and finally had their demands answered.  They were standing in pretty much the same spot they had at Music Hall, up front, house-left, right in front of Noble, who’d recognized them at the start of the show.  During "Lucifer", Noble turned his mike stand towards the crowd and tilted it down to the two, who easily took up his backing vocal chant with luster. 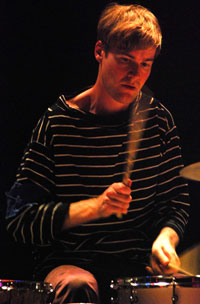 Click here for QRO’s review of British Sea Power at Music Hall of Williamsburg on May 11th, 2008

Pretty much from there on out, BSP could do no wrong.  There was a killer rendition of Valhalla‘s "Stunde Null", follow by Decline‘s always-excellent "Apologies To Insect Life" – which saw Scott call on first opener Eamon Hamilton to reappear, in spacesuit & helmet to beat his own drum. 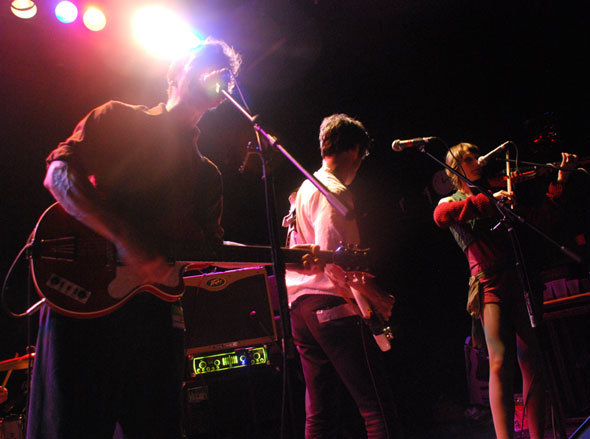 What else happened?  The band skipped their encore break when they were supposed to get a whiskey after the awesome early non-album single "Spirit of St. Louis".  Noble went into the crowd multiple times – to sing & play guitar (with mike stand), to play guitar while riding the Music Hall stage-climbers shoulders, and to, yes, climb up the Bowery Balcony (a much harder to reach place than at Music Hall…).  Hamilton returned to bang his drum in the crowd, while Sumner and Scott crowd-surfed (the latter while playing horn), as did at least one member of the actual crowd (Wood and Fry were, unfortunately, tied down by their instruments).  Seemingly everyone backstage came out some time or another during "Waving Flags" (pro-E.U. Rock Music single particularly appealing to opener Bologna’s A Classic Education – QRO photos), "The Great Skua", and closing mash-up of Decline‘s "Carrion", Rock Music‘s "All In It", and, yes, the never-recorded "Rock In A" – with Hamilton & others pulling fans onto the stage (Sumner even attempting to ‘stage-surf’ the crowd up there), including the "Easy!" super-fans and even your correspondent! 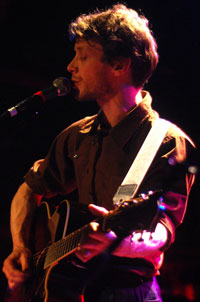 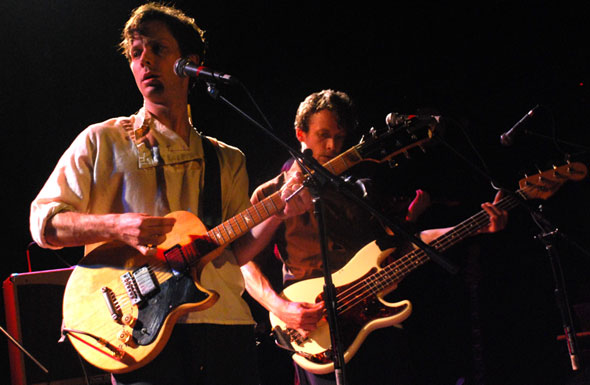 [We try to take a detached, third-person view of things at QRO, but forgive the slip into first person to say how great it was to be on stage as British Sea Power tore the house down to close out the night.  Met the band after the show to harangue them for again not playing "Remember Me", which Scott blamed on Noble forgetting part of it or something – between their thick accents and your correspondent’s drunkenness, was difficult to figure out what was being said, but they did also give away their remaining merch (don’t want to carry with them back across the Atlantic), so came out of it with a t-shirt, two mugs saying "British Tea Power", and a twenty in a mysterious foreign currency – think it’s Swiss…]

British Sea Power may never play the arena size venues in the States that their sound deserves – their name alone hinders them, special relationship or no.  And the march of time will go on.  But just as Her Majesty’s Royal Navy can still kick ass in the Falklands, Liberia, or Libya, so too can British Sea Power, even in America.