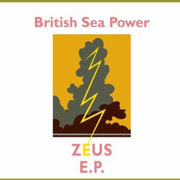 As befits their title, Brighton’s British Sea Power have always been an epic band, steeped in the “history rock” (QRO interview) now employed by the like of iLIKETRAiNS (QRO album review) and others, making near-magnum opi about such esoteric subjects as the eastward expansion of the European Union (“Waving Flags”) or an Antarctic ice shelf (“Larsen B”).  Before the 2011 release of fourth record Valhalla Dancehall, the outfit puts out the ‘maxi EP’ Zeus, which trades in some of BSP’s unique epic nature for an up-tempo garage-procession.

Click here for QRO’s review of British Sea Power at Music Hall of Williamsburg in Brooklyn, NY on May 11th, 2008

The title track/opener naturally sets the tone for Zeus, with it and pieces like the following “Cleaning Out the Rooms” and “Can We Do It?” bringing an up-march that is not as grand or effective as your usual British Sea Power, but has a certain catch that is new.  The back half to the eight-song EP sees the band experiment with that sound somewhat, including a teched-out version in “kW-h” that is lifted by its upbeat nature, and a road-speed press to the preceding “Mongk” that makes it difficult to sit still.  But there are also the requisite post-rock-y BSP tracks, such as the sadder & sweeter “Bear”, meandering pianos and echoes “Pardon My Friends”, and the near-nine minute closer “Retreat”, which employs intimate echoing vocals and distant, near-orchestral tones.

British Sea Power has worked steadily with a post-anthem sound all their own since breaking through in 2004 with “Remember Me”, but it has not taken them to the stadium sizes that they deserve (instead, they’ve played some of the oddest venues in Britain, such as a ferry across the River Mersey, the highest inn in U.K., and Carnglaze Caverns in Cornwall), so a sonic shift isn’t unexpected, even if it’s a step away from what makes the band special.  Not without its own rewards, but a step best taken on EP, not LP.