On Friday & Saturday, July 15th & 16th, Brooklyn Fireproof hosted ‘Bushwick Walkabout’, a day & a half of music, with some drinkin' thrown in. ...

On Friday & Saturday, July 15th & 16th, Brooklyn Fireproof hosted ‘Bushwick Walkabout’, a day & a half of music, with some drinkin’ thrown in.  It was all the brainchild of Bob Berman at ReThinkPopMusic, who lined up sixteen acts for the festival.  While none were ‘major name’ (whatever that means these days…), the quality was high, and it was hard not to find some new acts that you’re very glad you caught.

Things were a little stacked against the event, right from the start.  It was an active weekend in New York music, including The Radio Dept. at South Street Seaport (QRO venue review) on the 15th (QRO review), and The Village Voice‘s poor man’s Siren (QRO 2010 recap) on the 16th, 4knots (QRO photos) – both for free.  There was also two nights of Paul McCartney at Yankee Stadium (QRO photos of Sir Paul elsewhere), very much not for free.  Then Bushwick Walkabout was slammed with two cancellations: first the L train, which stopped running around midnight on Friday along a big stretch that include Brooklyn Fireproof’s Morgan Avenue stop, replaced by a shuttle bus that was hard to find at night, and packed during the day.  Then Friday headliner ArpLine (QRO album review) broke up (guess their life won’t be “endless circles”)… 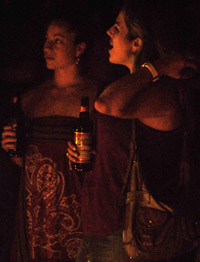 But Bushwick made it work.  The whole thing kicked off at around 8 PM on Friday with Rifle Recoil, a smooth-big band with a slightly electronica sound, a-la The Antlers (QRO live review).  Next up was Camden (the best band name since ‘Princeton’?… – QRO spotlight on), who are actually from the Boston area (though many originally hail from central-west New Jersey).  Their garage-pop/punk might admittedly be questionable in terms of ‘indie’, but enjoyable, and a sound that has gotten a bad rap [note: the drummer was formerly the Rollingstone.com photography intern, and there is nothing stranger for a concert photographer than to see someone who’d once been in the pit with you now up on stage…].  With ArpLine out, the relative biggest name of the night was probably Beast Make Bomb – enjoyable garage-pop/punk like Camden, but from a female-fronted band.  If the Vivian Girls (QRO album review) were good, they’d be Beast Make Bomb, who were admittedly a little heavy on the faux-lesbianism – or not heavy enough on it… (did have particularly female 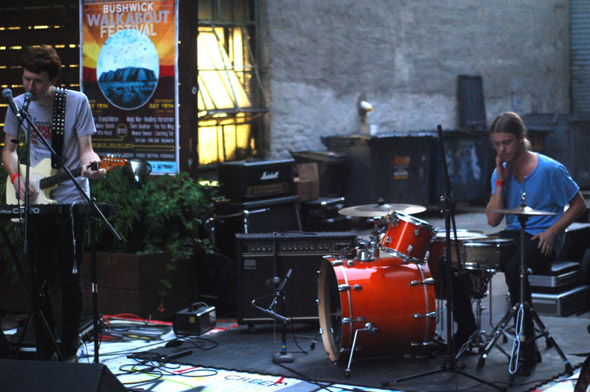 fans).  Grandchildren were like an alt-folk collective meets post-rock outfit Battles (QRO live review), including the emphasis on, and prominent stage positioning of, the percussion.  They were good, even strong in a post-rock way, but also a bit less than interesting to watch in the same post-rock way.  Filling in as the night’s capper was The Toothaches, another female-fronted act, punk with higher aspirations (you could tell because they were wearing tUnE-yArDs style multi-color warpaint – QRO photos the night before). 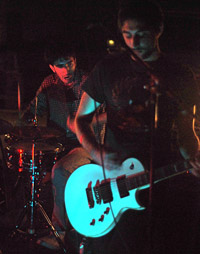 Saturday was a much fuller day, running from the afternoon into the late evening.  This did allow more bands to play in the sunlight, which was good because the lighting in the Brooklyn Fireproof backyard at night left something to be desired (usually, shows are held in an indoor side-room, but that was the VIP area for Bushwick Walkabout, including open bar).  But it was a hot day, and anyone trying to take the L shuttle bus was in for a dicey ride (just be sure you’re not standing on the back door step – or fall into it on the turns…). 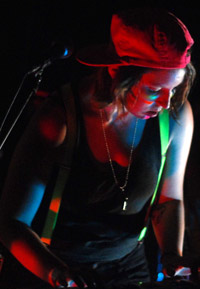 Out of Philadelphia came Cold Fronts, garage-pop with surf & seventies influences (including a guitarist with American flag wife-beater t-shirt), reminiscent of also-Philly Free Energy (QRO album review).  Backwords brought a laid-back alt-country/folk with guitar-noodling that wasn’t really a good fit with the garage-energy & -catch of the other artists at Bushwick Walkabout, but did work better as background music, and ended with a cover of Jefferson Airplane’s “White Rabbit”.  Midway in sound between Backwords and the rest of the fest was the following garage-country Little Gold, who had some J Mascis (QRO album review)-like guitar moments. 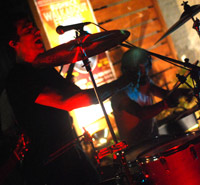 The festival as a whole rose to another level around when Fort Lean started.  If you’d met their wasted frontman the night before, with his bleached blond long hair, or saw him seemingly sleeping one off in the VIP area before his set, you’d think his band (he also played drums in Slam Donahue later in the night) would be another party-garage act that Brooklyn has too many of already.  Instead, Fort Lean played an expansive, sad, skillful performance, with even some twang in there.

Following came another major find/surprise, The Courtesy Tier.  If you’d heard them on 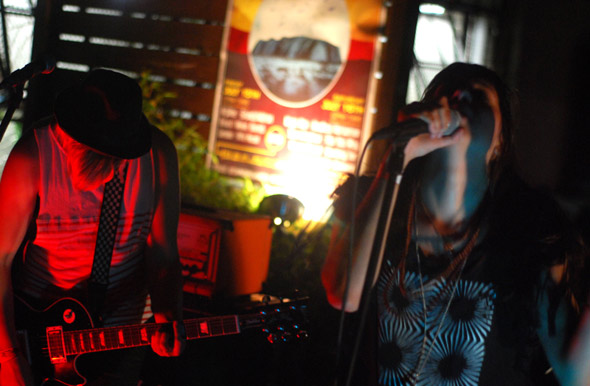 record on their recently released The Resolution, you would have no idea that they were only a guitar-and-drums duo (something else Brooklyn, and the indie world as a whole, has too much of…).  Their sound was bigger and more accomplished than the vast majority of guitar-and-drums duos, country-tinged for sure, but indie-evocative.  They even played their first-ever cover, something by Jose Gonzales. 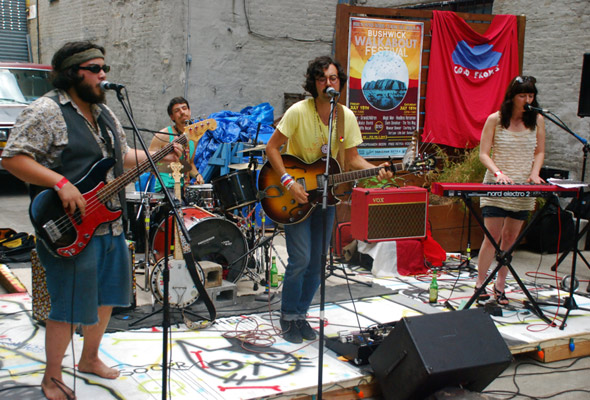 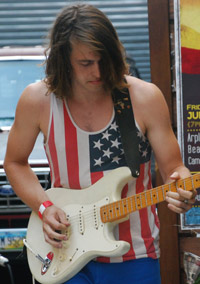 There were some forgettable acts on the night, like the balloon-laden Wowser Bowser, two-man Headless Horseman, and dance-rock closer Magic Man (especially hard to remember some later artists if you’d been drinking all day – get yourself one of Brooklyn Fireproof’s burgers!), but The Yes Way wasn’t one of them.  A favorite of Berman’s, it is still hard to pick of genre for the group – other than ‘rock’ – but they do it well.  Indeed, their drummer was playing with a broken hand, and they took advantage of the relative low lighting by playing an old movie on a projector above/behind them.

Bushwick Walkabout was way out in Brooklyn (even from the subway stop/shuttle bus drop-off point, one did have to walk through the ‘North Brooklyn Industrial Zone’), but had the energy of something nestled right in the city.  Particularly impressive was that, even with a line-up of bands you’d at best only heard of, there wasn’t a real ‘weak point’ in the event (and the distance it took to get there did keep you from leaving…), and that’s with a line-up that wasn’t really devoted to a single hipster-style of music.  A strong and diverse line-up of bands you don’t know but you should is hard to pull off, but Bushwick Walkabout did it.