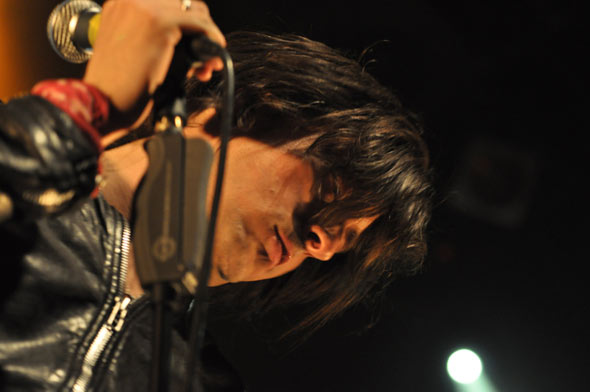 Click here for photos of Carl Barat & The Jackals at 2015 Bingley Music Live in Bradford, U.K. in the QRO Concert Photo Gallery

Click here for photos of Carl Barat at 2011 Latitude Festival in Southwold, U.K. in the QRO Concert Photo Gallery

Donned in a leather jacket and black vest, dripping with sweat and oozing rock star swagger, Carl Barat took on London’s Koko on Monday, April 4th as part of an extensive U.K. tour following the release of his debut self titled release as a solo artist in October 2010.  There are likely to be a few shrugs when the name is mentioned in the global music scene – after all, Barat has only shared a sprinkling of the same press coverage as fellow Libertines frontman Peter Doherty.  However, Barat, showcasing a range of material from his career – performing his solo material, both his songs and reputation better known from the Libertines and Dirty Pretty Things – Barat couldn’t possible be more quintessentially British or at the forefront of the U.K. music scene.

Despite failing to sell out many of the venues on this tour, and even selling tickets at a reduced price, Barat was more than capable of showing he’s more than worthy, performing alongside the usual suspects – an additional guitarist and drummer.  However, adding a striking classical touch were cellist, violinist, and double bassist – and two female vocalists, also known as the Langely sisters – creating a resonating, epic atmosphere.  However, this affair had something a little more special – Carl’s longtime girlfriend Edie was one of the vocalists, and Barat’s very own brother on guitar.

There’s perhaps something to be said about ‘family affairs’ in bands.  It’s always intriguing how bands composed of relatives have a certain tightness to them – and this was no exception.  Barat and his backing band performed an incredibly tight set and set no foot wrong, with astounding precision.  Each song was crafted beautifully with strong, sweeping arrangements and each track was played with great consistency, but it was without doubt that the crowd reacted with vigour to songs from the Libertines and Dirty Pretty Things back catalogue, such as “The Man Who would be King” – a classic Libertines track which awoke and energized the crowd. 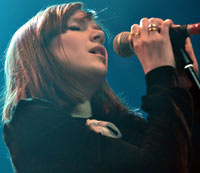 The set was somewhat sold short by those who showed little interest in Barat’s solo material, which showed some elements removed from the classic British blaring guitars of the Libertines era, almost a sound which has become all too repetitive and dated ten years on.  Many of the songs off Barat’s debut did not receive the greatest reception, however, tracks such as “The Fall” faired nicely particularly with the live addition with the strings, a dark Kurt Vile-ian track with a fairground element, and “Death Fires Burn at Night”, a rockier, heavier track which shows a new direction a forming of Barat’s own identity – arguably much needed in order for Barat to find his own feet rather than riding off the fame of other projects.

There is no doubt that Carl Barat still has it.  Often forgotten that Barat – as well as Doherty – both shared songwriting duties for their major shared success of great notoriety The Libertines, Barat shows real talent as an individual.  Although many of the 16-25 year olds who were in attendance clearly were interested in his involvement of other bands, rather than current work, Barat’s newer solo material does hold some weight, with well-written and structured songs that hit hard in the live arena.  However, it’s hard going shaking off a legacy by being part of one of the biggest U.K. bands of the garage rock revival of the last decade.  This was clearly demonstrated by the closing track “Don’t Look Back Into the Sun”, causing inspired mayhem throughout the venue, proving there’s nothing like a little nostalgia.

The Magus
Run With The Boys
The Man Who Would Be King
Carve My Name
She’s Something
Deadwood
The Fall
Je Regrette, Je Regrette
What have I Done?
Death Fires Burn at Night
Death on the Stairs
Bang Bang, You’re Dead
Nine Lives
The Ballad of Grimaldi
Sing For My Supper
So Long My Lover
Truth Begins
Don’t Look Back Into the Sun
Tags
Carl BaratThe Libertines
Categories
Concert Reviews
OLDER ARTICLE

The Boxer Rebellion : The Cold Still