Caveman nicely puts the band right in the sweet spot between the air above your head and the ground beneath your feet.... 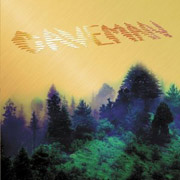 Photos of Caveman at 2016 Shaky Knees Festival in Atlanta, GA

Photos of Caveman at SXSW 2016 in Austin, TX

Photos of Caveman at 2015 Northside Festival in Brooklyn, NY

Photos of Caveman at Brooklyn Night Bazaar in Brooklyn, NY on April 25th, 2014

Photos of Caveman at By Robert James Williamsburg in Brooklyn, NY on October 24th, 2013

Photos of Caveman at The Bishop in Bloomington, IN on March 4th, 2013

Photos of Caveman at SXSW 2012

Photos of Caveman at Bowery Ballroom in New York, NY on January 20th, 2012

With their debut CoCo Beware (QRO review), Brooklyn’s Caveman became a critical favorite thanks to their varied, haunting, ‘empty room’ sound – but were also rather hard to pin down (not unlike singer Matthew Iwanusa and guitarist Jimmy Carbonetti’s prior band, The Subjects – QRO spotlight on). Follow-up Caveman wisely hones their focus onto an expansive, washing, beauty that doesn’t dissipate in the upper atmosphere.

Caveman opens with airy intro “Strange To Suffer” and closes with washing choral “Strange”, and much of what goes on in between has that atmospheric effect.  However, unlike much of the atmospheric music out there today, Caveman don’t get lost in waves of beauty that might be wonderful to go to sleep to – but will make you go to sleep.  The waves of sound and emotion on “In the City” following “Suffer” keep at least a toe on the ground, effectively swaying the listener while not seeing him disappear beneath the current.  The beauty on such songs as the subsequent “Shut You Down” and middle number “Over My Head” likewise aren’t over-complicated.  The band can rely a bit too heavily on keyboard tones at times – that combined with a bit of a slow dance beat on “Ankles” is out of their wheelhouse – and not enough on guitars – the stripped “I See You” reaches the kind of loss that made Bon Iver (QRO live review) a household name – but overall the balance is better than on CoCo.

That first record may have made Caveman a critical favorite (also helping was Carbonetti’s status as a top-of-the-line guitar tech, with his own shop), but the band hadn’t quite gelled enough to get larger audiences.  Caveman nicely puts the band right in the sweet spot between the air above your head and the ground beneath your feet.