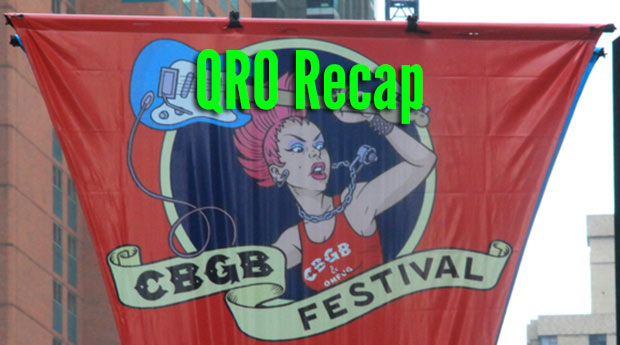 While it’s actual name is an acronym for ‘Country, BlueGrass, and Blues’, the Bowery’s CBGB became known as the birthplace of American punk rock and New Wave throughout the seventies and eighties, hosting the likes of The Ramones, Misfits, Blondie, Joan Jett, Talking Heads, and many more.  In the eighties and nineties it evolved into ground zero of hardcore punk with bands like Agnostic Front, Cro-Mags, Sick of It All, Gorilla Biscuits, and more.  Unfortunately, the NYC music scene moved on from the small space (that had been understandably ravaged over the many years…), and CBGB closed in 2006 with a final performance by Patti Smith. 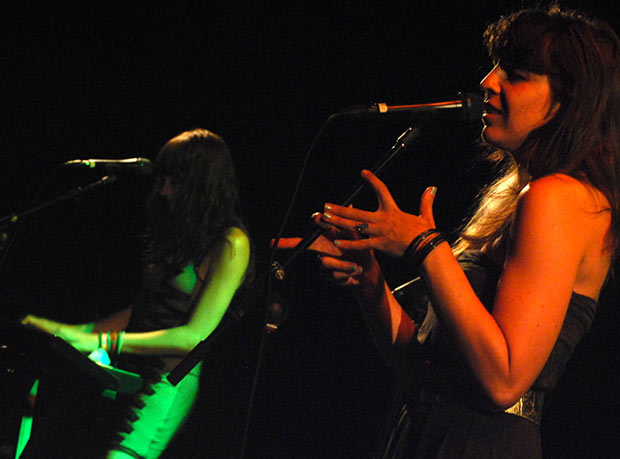 Click here for photos of Xylos at Union Pool in Brooklyn, NY on April 14th, 2012 in the QRO Concert Photo Galery

Click here for photos of Xylos at 2011 Tinderbox Festival in Brooklyn, NY in the QRO Concert Photo Galery

Click here for photos of Escort at SXSW 2012 in Austin, TX in the QRO Concert Photo Galery 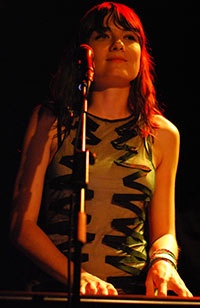 Thursday & Friday had the shows at venues across New York, ranging from old veterans like Glen Matlock (of The Sex Pistols) at Living Room (QRO venue review) and The Baseball Project (featuring Mike Mills of R.E.M.) at City Winery (QRO venue review) to hardcore punk shows both nights at Webster Hall (QRO venue review).  But many of the music blog hipsterati could be found on Thursday night at (le) Poisson Rouge (QRO venue review) for Escort and Xylos, part of an all female-fronted line-up there (reportedly accidentally made that way).  Xylos displayed their strong synth sound, not too airy or too dance, and if you want a funky dance party, you not only could do worse than Escort – you couldn’t go wrong with Escort.  And the hipsterati flocked to Highline Ballroom (QRO venue review) on Friday for Dale Earnhardt Jr. Jr. and Lissy Trullie. 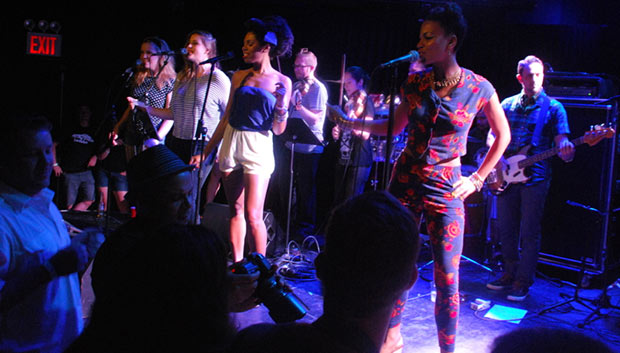 [note: QRO would be remiss if didn’t mention what happened at the Friday punk show at Webster Hall.  Veterans Sick of It All and Cro-Mags headlined the bill, but ex-Cro-Mags bassist Kyle Flanagan got the whole thing shut down before either played when he reportedly rushed the VIP/backstage area with a hunting knife, cutting and biting two members of the band, before being stopped by security and hauled off by the police, in cuffs with a broken leg (but still flipping off the crowd who was booing him).  At least it could be blamed on one person and one person only, and not any fans, so hopefully this incident won’t put off Webster Hall from holding more punk shows.

And QRO Mag is always in support of our almost-namesakes…] 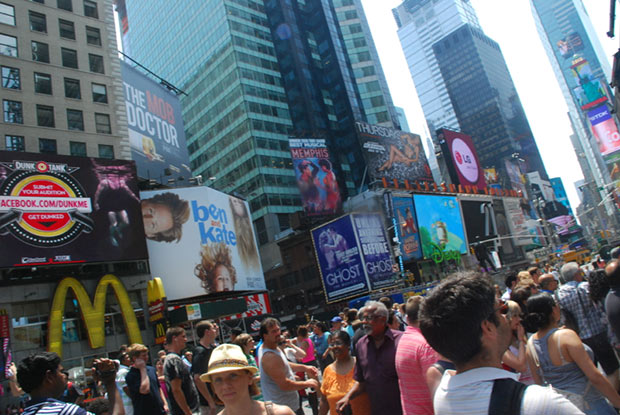 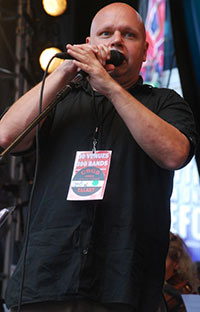 But the big events were happening outdoors on Saturday, as CBGB Festival took over both Central Park SummerStage (QRO venue review) and even Times Square!  Unfortunately, the two shows overlapped, forcing many to decide between SummerStage’s Guided by Voices, The Pains of Being Pure at Heart, The War on Drugs, and Cloud Nothings, or Times Square’s Clap Your Hands Say Yeah, The Hold Steady, Glint, Superchunk, Duff McKagan’s Loaded, Upper West, and Zulu Wave, hosted by 120 Minutes‘ Matt Pinfield.  Or you could try to catch both, like QRO did – but only made it to SummerStage for GBV. 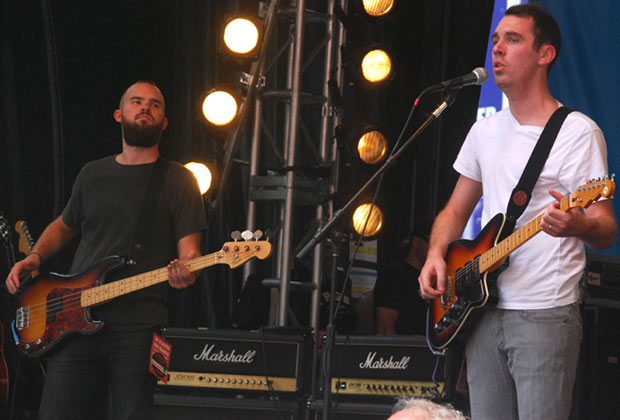 The first band at Times Square went on right at noon, and it was a hellishly hot noon (with virtually no shade to be found under the midday sun) for Zulu Wave on 47th Street & Broadway, but the new band’s indie sounded good.  Unfortunately, couldn’t say the same for Upper West (at the North Stage on 52nd & Broadway), who were three privileged white kids from the Upper West Side (at least they were honest in their name…) rapping about haters saying they couldn’t rap – you don’t have to be a hater to hate frat-boy rap… 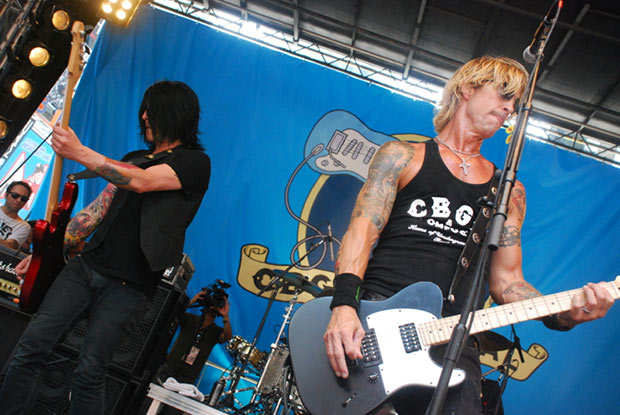 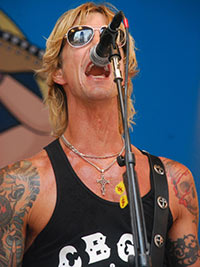 Still, it was worth coming early for Duff McKagan’s Loaded.  The former bassist of Guns ‘n’ Roses and Velvet Revolver certainly rocked with his own band, praising CBGB – and he’d played there back in the day with GnR.  McKagan even played some GnFnR in “It’s So Easy”, not to mention covering Iggy & The Stooges’ classic “I Wanna Be Your Dog” – with special guest Glen Matlock.  Nirvana’s Krist Novoselic had given the keynote speech earlier in the week, so it was certainly a festival laden with bassists… (where was Les Claypool – QRO interview?…) 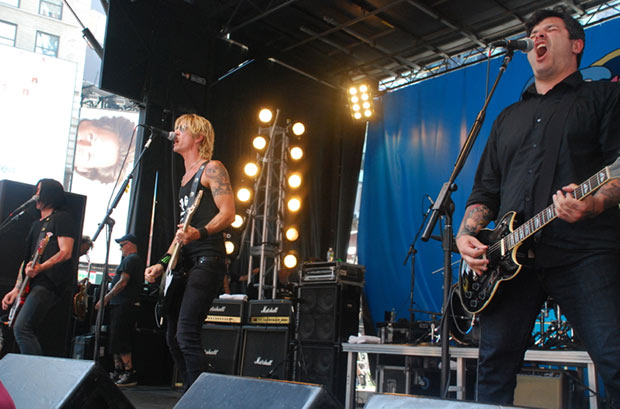 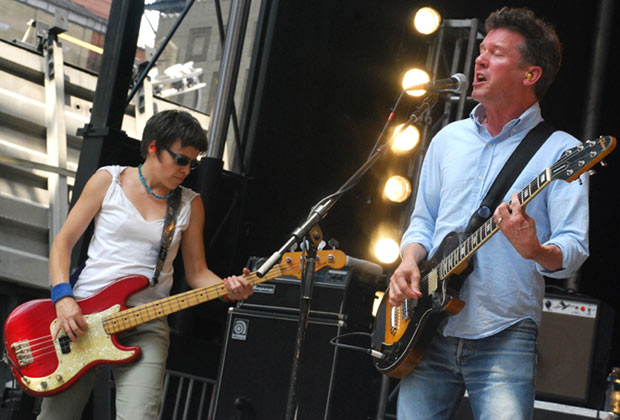 Click here for photos of Superchunk at Scala in London, U.K. on December 1st, 2011

Click here for photos of Superchunk at SXSW 2010 in Austin, TX 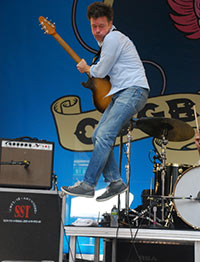 The heat was still unbearable, but thank god for Superchunk.  The nineties alt-rockers are probably best known for founding little-indie-imprint-that-could Merge Records (Arcade Fire, She & Him, Spoon), but they also have a strong set of songs of their own, and recently returned to the studio for the great Majesty Shredding (QRO review).  Majesty certainly got some Shredding, but the group didn’t shy away from their early classic, “Slack Motherfucker”, under the sign for Mamma Mia – language ordinances be damned!  They also displayed their trademark wit & great attitude, joking about how they weren’t allowed to say when they were going to play until when they played (1:20 PM – “Or 1:22, once I’m finished talking…”), or that they’d told their friends that they didn’t have to come see them in the heat… 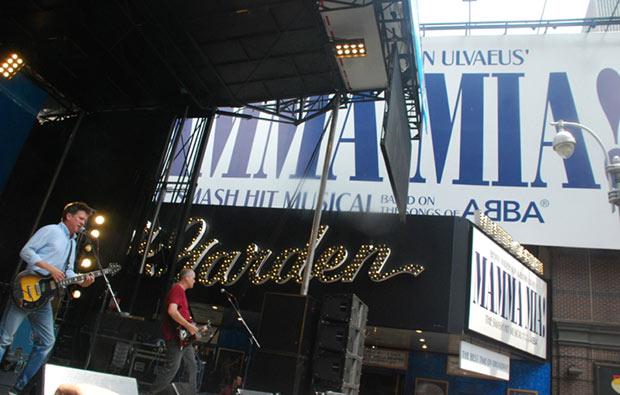 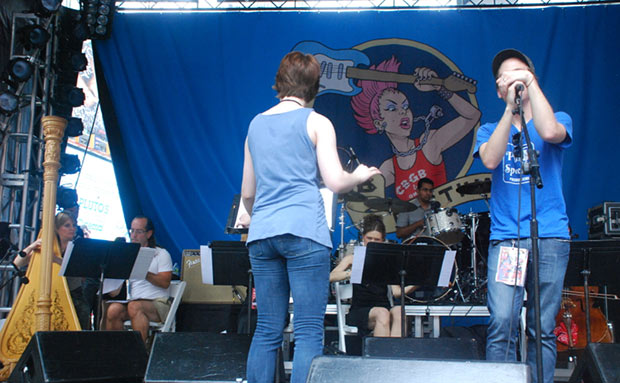 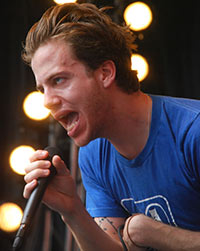 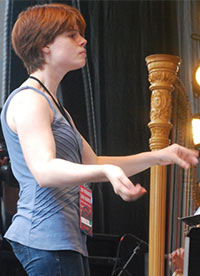 Oddly, there was a two-hour break between Superchunk’s 2:00 PM finish and the next act – but SummerStage’s show didn’t start until 3:00 PM, so it was best just to get out of the heat for a few hours and return to Times Square at four for Glint.  The singer/songwriter had his own unusual set-up, performing with an orchestra (though, “It’s pretty hot for an orchestra…”), including a conductor (whose own mother was playing the harp – guess that’s why she alone got a page-turner for her sheets of music…).  The music was a little emo, but the performance was an interesting change of pace. 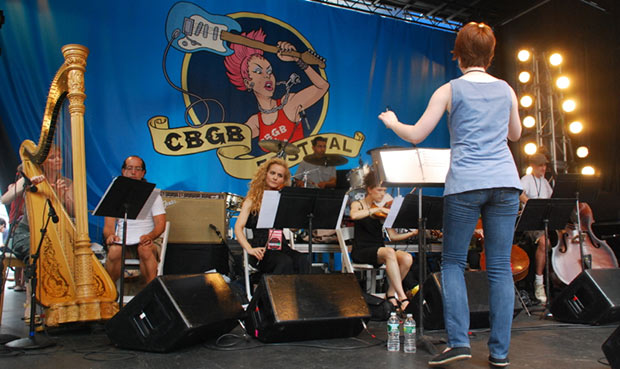 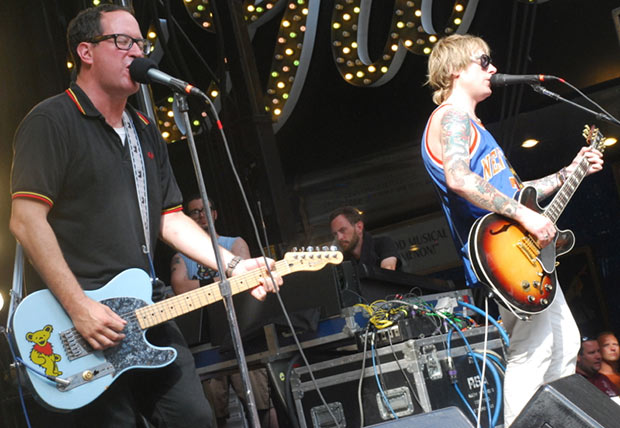 Click here for photos of The Hold Steady at 2011 POPPED! Festival in Philadelphia, PA in the QRO Concert Photo Galler

Click here for photos of The Hold Steady at 2009 Rothbury Festival in Rothbury, MI in the QRO Concert Photo Galler

Click here for QRO’s review of The Hold Steady at Prospect Park Bandshell in Brooklyn, NY on August 9th, 2007 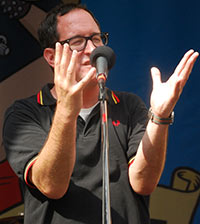 The loyal fans had braved the heat for The Hold Steady, but you’d really expect nothing less from this rock band with a devoted following – they sang along to frontman Craig Finn’s talk-singing (which was amplified by numerous hyperactive hand gestures); they even tried to crowd-surf.  And if you thought The Hold Steady are incredibly overrated, well, it was a good time to get something to eat at one of the food trucks between the two stages (also in Times Square were a few watering spots, so you could stay hydrated with The Big Apple’s actually great tap water). 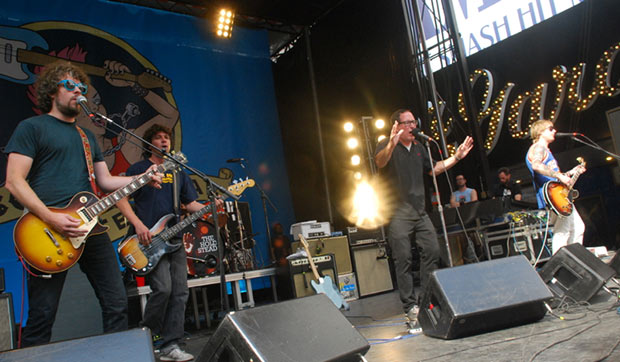 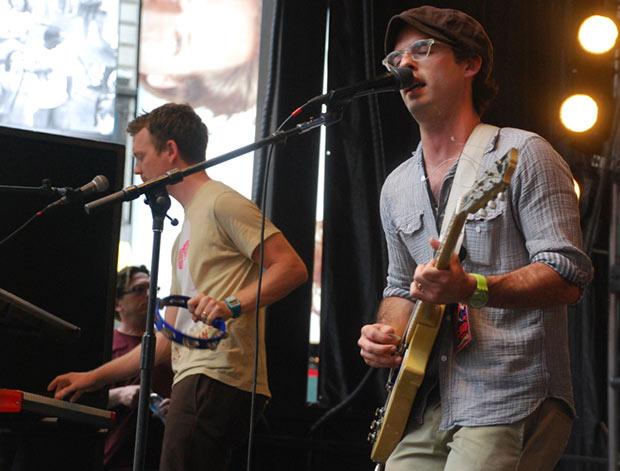 Click here for photos of Clap Your Hands Say Yeah at El Rey Theatre in Los Angeles, CA on May 19th, 2012
More

Click here for QRO’s review of Clap Your Hands Say Yeah at Scala in London, U.K. on September 7th, 2011

In the run-up to CGBG Festival, Clap Your Hands Say Yeah announced the departure of not one, but two members, Robbie 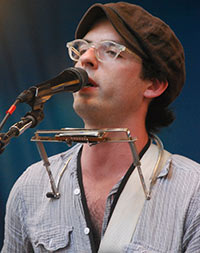 Guertin and Tyler Sargent (leaving the band pretty much just singer/songwriter Alec Ounsworth – QRO solo album review) – but the pair still would be playing at Times Square, for the last show by the original line-up (though they later announced a couple of shows at the tiny Cake Shop – QRO venue review – in benefit of that imperiled Lower East Side club).  Still, the band had their own loyal fan base – and didn’t shirk from playing “Satan Said Dance” near the statue of Father Patrick Duffy, WWI priest/soldier (those two occupations are compatible?…). 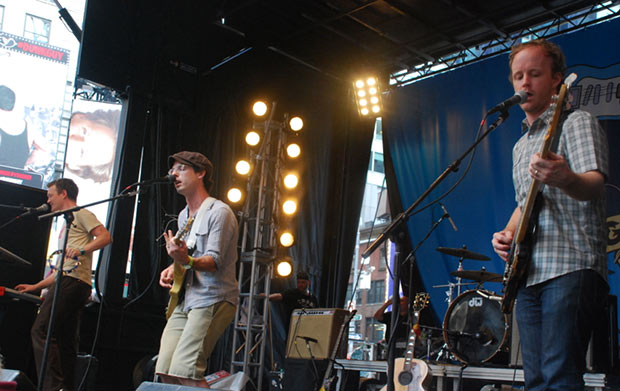 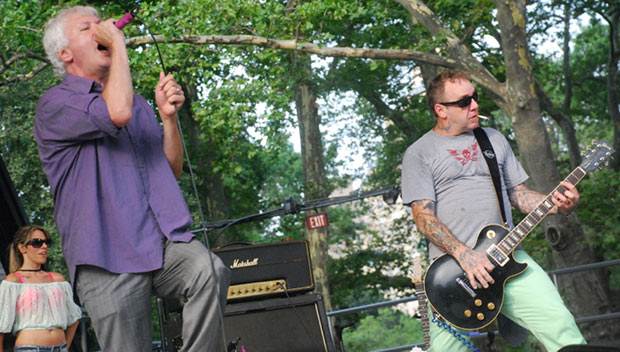 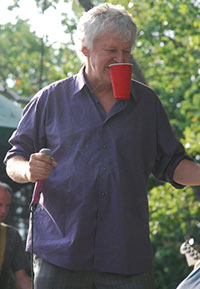 If you left CYHSY early, and took the R to 6 (switching at 59th Street), you could make it to SummerStage for Guided by Voices.  The veteran lo-fi punk band under singer/songwriter Robert Pollard (QRO solo album review) reunited a couple of years ago under its ‘classic line-up’, the original one from 1994-1996 (does this mean CYHSY & Ounsworth will reunite with Guertin & Sargent in the mid 2020s?…).

Pollard has kept up his ultra-prolific songwriting, with the new Let’s Go Eat the Factory (QRO review) out at the start of this year, Class Clown Spots a UFO released in June, and another GBV record (Bears For Lunch) planned for the fall.  Not that the group has gotten ‘professional’ – there was a cooler for beers on stage (Pollard joked about an early show where he threw cans of beer to fans in the crowd, but ended up hurting people and getting in trouble…), not to mention cigarettes at the no-smoking-by-order-of-Bloomberg venue.  Pollard even joked before “God Loves Us” that Benjamin Franklin had once said, “God loves us because we love beer” or “God Made beer because he loves us.”

It was a fitting end to a festival thrown by the late, great, CBGB. 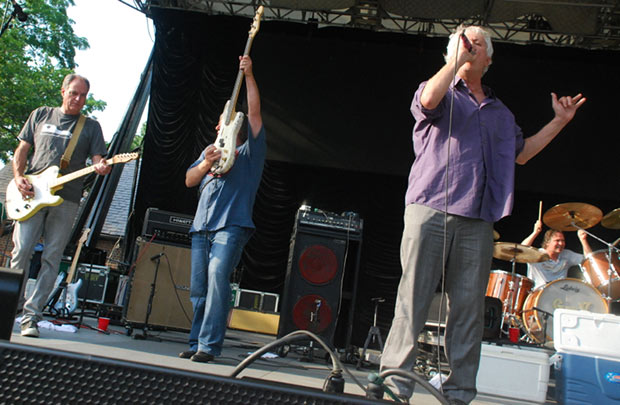