<img src="http://www.qromag.com/wp-content/uploads/2008/09/centralparksept10.jpg" alt=" " />As the summer season wound to a close, there was something for everyone as the three acts graced the Central Park SummerStage were easy on...

As the summer season wound to a close, there was something for everyone as the three acts graced the Central Park SummerStage were easy on the eyes and the ears. It wasn’t chilly – yet – on September 10th, but it wasn’t over-hot, either, at Central Park’s Rumsey Playfield (QRO venue review), which was serving one of its last days as an outdoor venue this year.  But thank goodness it did, as the ‘Septemberstage’ played host to three different, great, and great-looking bands, in The Kooks, stellastarr*, and Illinois. 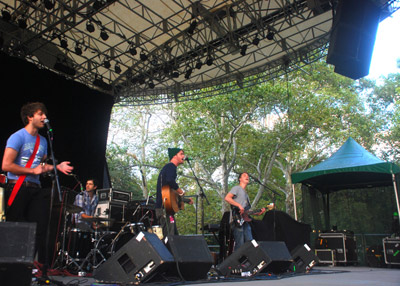 Philadelphia’s Illinois are a diverse act all in themselves, as their material ranges from banjo-twang country jamboree to white-boy tech-rap (not to mention the softer, slower songs that they don’t tend to bring out in live shows, especially outdoors – QRO outdoors live review from last year).  Back on tour with The Kooks for something like the third time, the four-piece are working up to the release of their first full-length, and brought out some new numbers, including a dark, road-drive track, some country-twang fun, and turntable-scratching piece.  But the heart of their set was still in What the Hell Do I Know? EP (QRO review), from expansive opener “Asia” to Mary Louise Parker booty-shakin’ “Nosebleed” to everyone’s favorite story-telling, bowl-smokin’ rap, “Bad Day” (where singer/guitarist Chris Archibald (QRO interview) compared his Hyundai Civic to bassist Martin Hueger’s Lincoln Navigator…). 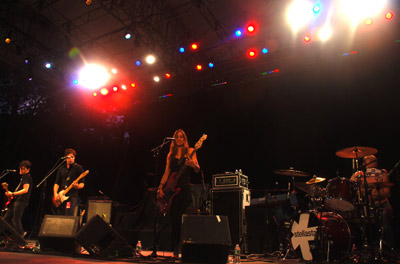 Local starrs stellastarr* were actually returning to the SummerStage, after having played there a few years ago in the pouring rain (and were televised on Mark Cuban’s HDNet).  Like Illinois, they divided their set list between previously released material and songs from the upcoming new album, though a little more evenly balanced.  Stellastarr* opened with perhaps their best new piece, the grand, rockin’ to the heavens “Tokyo Sky” – and followed it up with their biggest hit single, the always-welcome “Sweet Troubled Soul”.  Other new pieces included two stop-start ones, with almost funky rhythms – one a dark bite, the other more upbeat – and a short, driving “on the freeway” attack.  As opposed to closing with “Jenny” like the band usually does, they threw it in the middle, and brought their set to a finish with another classic single of theirs, “My Coco” – but didn’t neglect their sadder material, as ‘in’ between fell “In the Walls” and “Lost in Time”.  Stellastarr*’s first New York City show in over a year, last year’s show (QRO live review) was supposed to be a preview of the then soon-to-come new album, but singer/guitarist Shawn Christiansen (QRO interview) did announce that the anticipated record should be dropping this January. 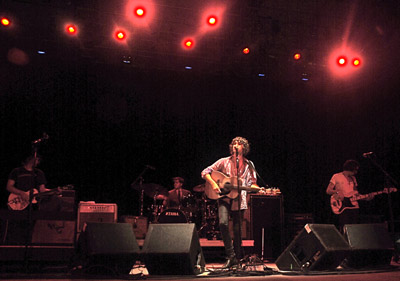 Unlike their openers, Britain’s Kooks had no trouble putting out Konk (QRO review) this year, their follow-up to 2006’s smash-hit debut, Inside In/Inside Out.  Inside sent the young lads into the stratosphere, and they seemingly haven’t come down yet – certainly didn’t in Central Park.  They mixed it up between Inside & Konk, but delivered on their oh-so-catchy singles, from break-out “Naïve”, “Ooh La”, and “You Don’t Love Me” from Inside to Konk’s more recent “Mr. Maker”, “Shine On” and “Do You Wanna”.  Yet, in the encore return, singer/guitarist Luke Pritchard showed a bit more of an emotional side, first with a solo acoustic version of Inside opener “Seaside”, then getting a guest-spot violinist and back-up chorus (i.e., the crowd…) with “Jackie Big Tits”, and then a guest-spot guitarist for Konk’s starter, “See the Sun”.  And he finished out with the whole band – and crowd – on “Stormy Weather” and “Love” – as the young man virtually flung himself into the teeming masses. 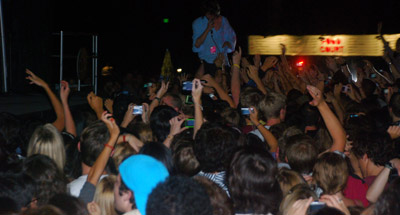 With The Kooks headlining, yes, the crowd was going to be young (especially if you don’t count the dads there, watching over their kids) – but not as young as you might expect, especially as the night got further in (with doors before 6:00 PM, your working adults will always be a little late to arrive, whether with a young-appeal band like The Kooks, or an older-appeal one like Wilco – QRO live review).  Along with the hipsters there for the up-and-coming Illinois, there were the indie-rockers with a couple of years under their belt wanting to be able to catch stellastarr* again – not to mention a healthy smattering of older Kooks fans.  The audience was tilted female (again, especially if you don’t count the dads…), but what do you expect when you got bands who run the gamut of good looks, from brash young Brits to unshaven, unkempt fellas from back-country Middle America to your all-black-wearing New York artiste males, and only one lady between all three bands (though when that lady’s stellastarr*’s Amanda Tannen…)?

With the coming of fall means the end to another great season of outdoor shows in the Big Apple, and the big city’s biggest park put on one hell of a big show to close things out… 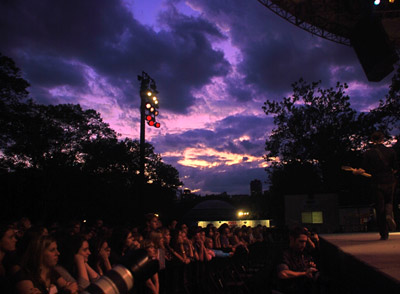