<img src="http://www.qromag.com/wp-content/uploads/2009/02/charlesspearinhappiness.jpg" alt=" " />Charles Spearin of Broken Social Scene and Do Make Say Think gets even more unusual and compelling with his <em>Happiness Project</em>.<br />... 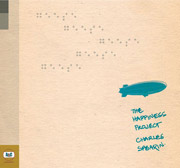 Of the giant Broken Social Scene collective (QRO spotlight on), Charles Spearin has always stood out as the oddest of the oddballs, and not just because of his recognizable handlebar mustache.  While Kevin Drew and Brendan Canning (QRO interview) form the core, there have been virtuoso guest guitarists from Jason Collett (QRO interview) to Andrew Whiteman (The Apostle of Hustle – QRO live review), not to mention eye-and-ear-catching guest female vocalists like Feist (QRO live review), Emily Haines (of Metric – QRO live review), and Elizabeth Powell (of Land of Talk – QRO interview), but multi-instrumentalist Spearin has always been somewhat elusive.  Meanwhile, of all the various BSS spin-offs, side projects, solo work, related bands, and the like, Spearin’s post-rock Do Make Say Think stood apart from the indie-pop/rock of the rest.  And now Spearin takes an even further step out of the mainstream – but also, in a way, into the limelight – with The Happiness Project: a collection of recordings of voice of his neighbors talking, often about happiness, with music set to it and even remixed.

The whole concept is difficult enough to get ones head around, but Spearin had laid some groundwork by previewing the material during Broken Social Scene’s Something For All of Us… (QRO review) tour, wherein he’d play a recording of his Caribbean neighbor Mrs. Morris talking about happiness, and then had it accompanied on saxophone.  “Mrs. Morris” leads off and ends off the full Happiness Project, and provides a wonderful introduction and reprise coda to the album, as she joyously equates happiness and love (with a winning accent).

The Happiness Project could have been some awful spoken word project, awkward experimental jazz, or over-strange ‘found footage’ type of recording, but Spearin’s skill and obsession with vocal cadence makes for something interesting and compelling, as well as unusual.  “Anna”s discussion of working with trouble women goes eighties up-jazz and catchy, while little “Vittoria” talking about art at school is converted into big-band horns and a scat-like remix.  But things don’t have to go bright: the relaxed, self-effacing humor from “Marisa” is somehow turned into an atmospheric haunt that really scares.

Spearin also doesn’t overdo it with the instrumentation.  On the two most interesting speeches, “Vanessa” and “Mr. Gowrie”, he restrains his overlays.  This lets “Vanessa”s fascinating description of going from being a born-deaf woman to be able to hear (thanks to a cochlear ear implant) dominate, and later “Mr. Gowrie” is able to impart what it was like, growing up one of fourteen children (all from the same pair of parents) in India.  A bit more work could have been done to “Marisa” (which sounds like a little boy) talking about butter, however.

Rating and critiquing The Happiness Project seemed like an over-daunting task at first, akin to just grasping the concept of the record, but once one gives it enough spins (unfortunately, on repeat, the ending “Mrs. Morris (Reprise)” goes into the opening “Mrs. Morris”), the stories become as familiar as your neighbors, while the melodies enchant.  Not for everyone, but for far more people than one might expect; it is a singularly interesting and impressive piece of work from the singular Charles Spearin.