<span style="font-style: normal"><img src="http://www.qromag.com/wp-content/uploads/2010/03/citizencoptherainwaterlp.jpg" alt=" " />Citizen Cope's first release on his own label perhaps grants him a little too much freedom.</span> ... 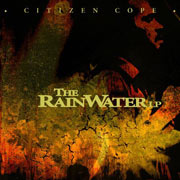 Clarence Greenwood has made a career out of being less than cooperative.  Whether you see him as an artist insanely dedicated to the handling of his music, or as a pompous stoner that doesn’t realize how fortunate he is, it is fairly convincing to argue that he relishes being difficult.  Despite its related ups and downs, the Brooklyn-based musician’s Citizen Cope project has remained in the spotlight for much of the last decade.  This is for good reason, considering his soft soul sound is a mile ahead of most contemporary players in the genre, on a good day.

The Rainwater LP, Greenwood’s latest endeavor, begins memorably on upbeat songs "Keep Askin’" and the social commentary "Healing Hands".  Citizen Cope’s sound excels with a little more emphasis placed on soul, and a little less on the ska sound prevalent in past work.  Some gentle piano and fitting percussion accent a quiet acoustic guitar and a magnificent side of Greenwood’s voice early on.  The album reaches its peak on "The Lifeline", which sees a gentle sadness in simple but powerful sentiments like: "If you come looking for the hard times, hard times ain’t hard to find."

Unfortunately, the steady flow established here comes undone on "Jericho" and "A Father’s Son", which are far too murky to decipher any real beauty or enjoyment.  Greenwood pulls out of the tailspin, but much of the rest of The Rainwater LP is a shaky ride.  "The Newspaper" manages to shrug off some of the overly hazy feel, before the ten-song album dishes out alternate versions of "Keep Askin’" and "The Lifeline".  Having finally broken free of the vile confines of the record company side of the industry, Cope’s first release on his own label perhaps grants him a little too much freedom.  Despite being sprinkled with heartening songs, the album projects a certain ambivalence overall.