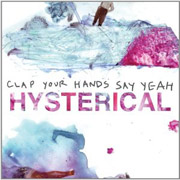 After a four year gap, allowing lead singer Alec Ounsworth to dabble in the solo arts (QRO solo photos), Clap Your Hands Say Yeah finally follow up 2007’s Some Loud Thunder (QRO review) with Hysterical.  Perhaps comparisons with previous releases are unfair, but this album lacks some of the fun that CYHSY’s first two albums had in spades.

There are plenty of positives – opening track “Same Mistake” is a good all-rounder with racing guitars and punchy lyrics.  The same can be said of “Ketamine and Ecstasy”, the most toe-tapping of the bunch.  There are also very moving moments in “The Witness’ Dull Surprise” and “In a Motel”, the lyrics of which are beautifully poetic.

This is not a bad album by any means, there’s just something about it that sounds very similar to The Killers (take that as you wish – QRO album review).  This may seem disappointing to those who are familiar with Clap Your Hands Say Yeah’s usual sound, a sound that has worked well on both previous albums, and Ounsworth’s solo project Mo Beauty (QRO review).  And some tracks, like “Idiot”, make it feel like the band is just going through the motions.  But if you come to Hysterical with no preconceptions then it’s unlikely to disappoint, especially on more thoughtful tracks like “Misspent Youth”.