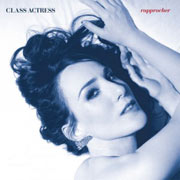 Click here for photos of Class Actress at Highline Ballroom in New York, NY on March 2nd, 2010 in the QRO Concert Photo Gallery

Click here for photos of Class Actress at Brooklyn Bowl in Brooklyn, NY on February 17th, 2010 in the QRO Concert Photo Gallery

Click here for photos of Class Actress at 2009 Northside Music Festival in Brooklyn, NY in the QRO Concert Photo Gallery

Fans of the earlier Journal of Ardency (released via Grizzly Bear’s Chris Taylor’s label Terrible Records) will note the decided absence of the traditional & familiar rock ‘n’ roll textures in Rapprocher.  Class Actress has doubled down on the electronica, taking hints from the post-chillwave landscape and establishing a few landmarks of its own.  In particular, the glam aesthetic does wonders for the reception of the album.  The breezy synths flutter past the listener like diaphanous ribbons of fluorescent pellicle, rub against your skin like the softest cashmere, as smooth as a swatch of silk.

Rapprocher is a luxuriant album that shamelessly pinpoints the brain’s pleasure receptors.  Sonic fantasy exerts its dreamlike pull over the more mundane precincts of the heart, resulting in sheer aural decadence.  Marxists, preachers, all the victims of sobriety need not apply: this album doesn’t want any cold fish.  Rejoice!  Dionysian new wave disco has arrived.