<img src="http://www.qromag.com/wp-content/uploads/2010/11/clinicbubblegum.jpg" alt=" " />The band that sounds like themselves & no one else changes from what they've done before. ... 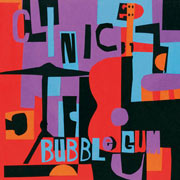 Ever since they started over a decade ago, two comments have always swirled around Liverpool’s Clinic: they sound like no one else (something that used to be up on their own webpage), and that they sound the same, album-to-album.  From their early success (including an appearance on Late Show with David Letterman) with records like 2000’s Internal Wrangler and 2002’s Walking With Thee, to their failure to breakthrough and relegated to the status of ‘cult’ band, the group’s combination of old-timey lo-fi instrumentation with near alt-country procession and singer Ade Blackburn’s (QRO interview) clenched teeth vocals has been very consistent – like how the band always wears surgical masks and matching outfits on stage, such as Hawaiian shirts on the tour for their last, Do It! (QRO review).  Well, the four-piece actually breaks their mold, or at least shifts a great deal, on their latest, Bubblegum, going softer & higher with more psychedelica & wa-wa for a refreshing change, even if their old way is still better.

There’s one element of Bubblegum that is consistent with previous records: the band’s output of an album every even year in the twenty-first century.  But from the first notes of opener/single "I’m Aware", the new record signals a new Clinic, lighter with a lot of wa-wa.  The lighter nature means that Bubblegum is not some psych-rock seventies retread; indeed, the only band that Bubblegum-era Clinic can still be compared to is pre-Bubblegum Clinic.  And while the softer Clinic is nice, and it’s good that they’re stretching, one can’t help but feel that you liked them better before.

There are tracks that shift back to the older Clinic, such as the stronger, louder processions "Lion Tamer" and closer "Orangutan", while "Milk & Honey" and "Forever (Demis’ Blues)" mix the old & new.  The best mixture, however, is "Evelyn", combining the high psych and Clinic procession.  Bubblegum also contains a couple of real curveballs, firstly the tropicalia-influenced instrumental "Un Astronauta en Cielo", but especially the near-spoken word "The Radio Story", which would be utterly original if it didn’t sound so much like Blur’s near-spoken word "Essex Dogs".

‘Cult’ artists often get tarred with the ‘everything he/she/they do is the same’ label, and often with good reason (can George Romero make a non-zombie movie?…), even if what they do keep making is good.  Bubblegum nicely diverges from Clinic’s well-trod path, while still sounding like them (and no one else).  If it’s not as good as their prior material, well, it’s not like they haven’t put that out in spades.

Bear In Heaven : Live in Chicago