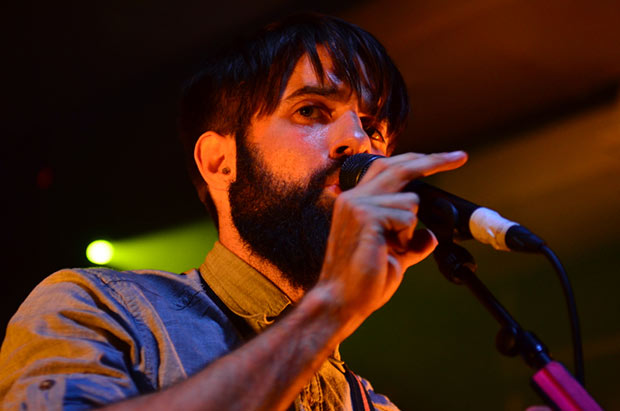 Click here for photos of Clock Opera at 2012 Truck Festival in Steventon, U.K. in the QRO Concert Photo Gallery

Click here for photos of Clock Opera at 2012 Tramlines Festival in Sheffield, U.K. in the QRO Concert Photo Gallery

Click here for photos of Clock Opera at 2012 London Calling Festival in Amsterdam, Netherlands in the QRO Concert Photo Gallery

Click here for photos of Clock Opera at SXSW 2011 in Austin, TX in the QRO Concert Photo Gallery

Clock Opera emerged in 2009 with an impressively fully formed double a-side "White Noise"/"Alouette" showing off their emotional and intricate ‘chop pop’ sound – think the epic alt-rock of Elbow (QRO album review) or Coldplay (QRO album review) but with a much greater emphasis on electronic textures and loops.  Since then their just-released album Ways to Forget (QRO review) has been a long time coming.  Perhaps its lengthy gestation period helped to build up the patience in both band and audience, which was put to the test at the Scala in London on Monday, April 24th.  With roadies continuing to frantically adjust equipment long after they were due on stage, it was clear that something wasn’t right.  In the end their curtailed set came in fits and starts, with frontman Guy Connelly suggesting at one stage that they play the rest of the set acoustically to bypass the technical gremlins, though in the end that didn’t prove necessary.  His unruffled joviality between pieces helped to paper over the cracks that the songs’ excellence couldn’t.

The band started where it all began with "White Noise".  The song’s dynamic shift, from spacey atmospherics fueled by synth burbling into energetic pulsing beats, was further emphasized live and its emotional uplift was even stronger.  From there the set was mainly based on their extensive catalogue of singles, but also some new songs from the album such as "The

Lost Buoys", which were received just as positively.  That one also got a revealing introduction that made sense of its lists of tiny nations as being 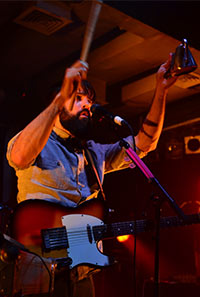 linked by their tax haven status.  For b-side "Let Go the Lifeboats", an extra friend was called on stage to play musical saw; a nice addition to its spooky ambience.  Visually the band’s array of analogue synths, and unconventional percussion like the metal cup bashed at for the rhythmic frenzies in the tense "A Piece of String", together with Connelly’s quiet charisma, made sure that there was something to look at.  He managed to make simple gestures like pointing with arm held out seem dramatic in 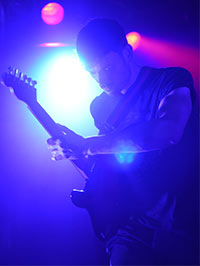 The highlight was last year’s "Belongings", a song whose rousing "oh oh oh oh!" finale proved so catchy that much of the crowd jumped the gun and had to be shushed out of singing it until after its delicate opening section had been completed.  In the end there wasn’t much to come after that and the unusually grizzled guitar groove of "Lesson No. 7" turned out to be the last song, as not even appeals to the venue’s manager could shift the 11pm curfew to allow the planned encore of the album’s dramatic finale "Fail Better".  The disappointment and affection of the audience was clear as the band came out to wave their premature goodbyes. 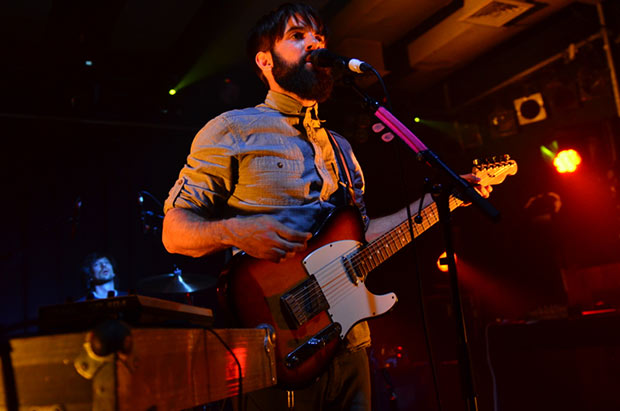