After starting late on Day Three, QRO hit Day Four as early as possible - and still rocked well into the A.M. ...

After starting late on Day Three, QRO hit Day Four as early as possible – and still rocked well into the A.M. Daytime was dominated, again, by running around The Bowery, starting things off with the new favorite CMJ venue and CMJ band.  After two nights of lame venues, it was high time to go to an old favorite, Mercury Lounge.  But starting just after noon didn’t mean any early bed times, finishing up a fifteen hour day at Gramercy Theater. 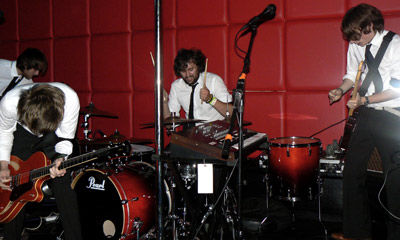 Starting the day off earlier than every before, iLIKETRAiNS chugged into Bowery’s R Bar at 12:15 P.M. on the dot (must unlike real British trains) to play on a pole-dancing stage.  With a set pretty similar to yesterday’s at WOXY/White Rabbit show (QRO Day Three recap), the time of day may not have been as good, but the dark backroom at R Bar was better suited for the epic British post=rock – and especially for their projection slide show of the doomed Scott Expedition to the South Pole (“Terra Nova”), Newgate Prison (“Spencer Perceval”), and others.  Once again wearing black pants, white shirts, black ties, and black armbands (hopefully not the same ones from last night), iLIKETRAiNS delivered a great set of songs off of Progress/Reform (QRO review) and the yet-to-be-released-in-America Elegies to Lessons Learnt. 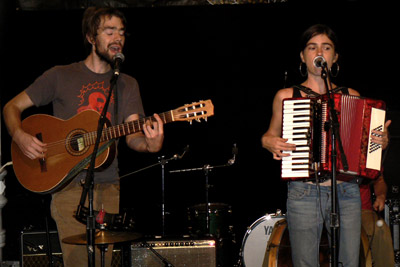 North Carolina’s Bowerbirds closed out the Day Stage as rain began to fall for the first time at CMJ.  In a way, the sad nature was fitting for the three-piece, whose wistful music relies upon not just Phil Moore’s guitar and vocals but also Beth Tacular’s accordion, Mark Paulson’s violin, and a big bass drum shared by the two of them.  At first, their alt-folk didn’t exactly impress, but the more and more one listened, the more and more one liked (with the feel of a Southern version of Quebec’s Patrick Watson – QRO interview – less orchestral, more bluegrass). 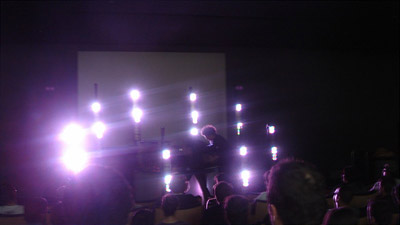 The duo hit up a half-seated, half-standing space at the SoHo Apple Store and pushed their way through a 45-minute set.  They broke out a snarling set of heavy grooves in front of an erratically powerful light show that worked best as a side of the store that had gone haywire. 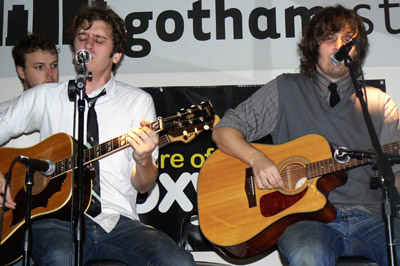 Broadcast delays and a shorted-out stand-by switch on a house amp meant WOXY’s Friday broadcast at White Rabbit didn’t start until three o’clock – and instead of bumping Pennsylvania’s Illinois back a slot, they were swapped behind the scheduled 3:00 PM second act, The Epochs.  Playing acoustic without their drummer, The Epochs’ set was relatively removed from their self-titled LP.  The folksy-feel was pumped up as they delivered a nice, but not exactly gripping, set. 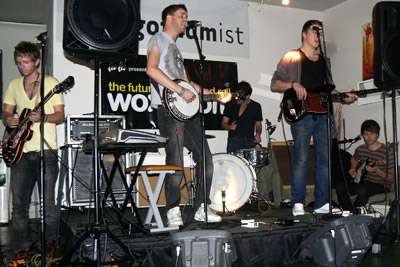 Thankfully, Illinois was well worth the wait.  The acoustic setting meant the band veered even more into indie-bluegrass, similar to the outdoor daytime setting of their McCarren Park Pool show (QRO live review).  Singer/guitarist/keyboardist Chris Archibald understandably relied heavily on his banjo, but that did mean his probably better piano work got something of a short shrift.  That and the time constraints limited the song choice (missing What The Hell Do I Know?‘s (QRO review) wonderful, extended, piano-finisher, “Bad Day”), but still delivered with choice tracks like “Asia”, “Screendoor”, and “Nosebleed”. 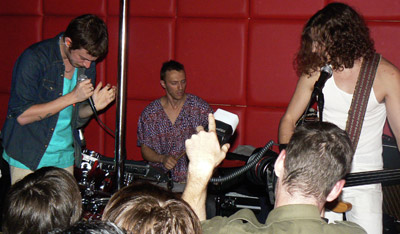 Back at the best CMJ-only venue so far, R Bar (and not just ’cause of its stripper polls…), Yeasayer proved the R’s biggest draw, with a packed backroom.  Their hard techno-rock has a definite dark gospel overtones (playing like the evil twin of folksy science-collapse Grandaddy, or a southern Battles).  With All Hour Cymbals set to drop next Tuesday, their future looks strong. 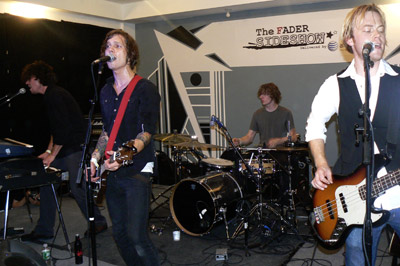 The FADER sideshow next to The Annex was worth attending no matter the act, for the sweet, free, some alcohol-plus-some fruit juices drink, but Wild Light rocked all the same.  Finally catching the Boston band after missing them yesterday (QRO Day Three recap) and at Randall’s Island (QRO live review), the instrument-switching foursome rocked with some fine indie-rock.  With a ton of media covering them at the show – including a few too many video cameras (opening on tour with Arcade Fire will do that for you) – Wild Light have a ‘next big thing’ air about them. 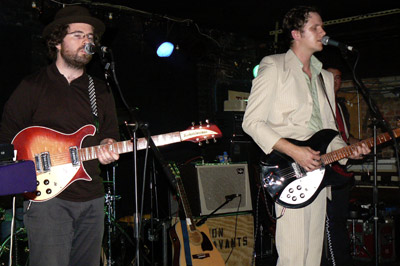 Despite the title to their debut LP, Post Rock Defends The Nation (QRO review), the Bon Savants have more of a blues-pop vibe to go with their expansive sound.  While post-rock purists might think the Savants’ nation not worth defending, this mix – and their more formal dress sense – mean they fit nicely with the night’s main act, The Walkmen. 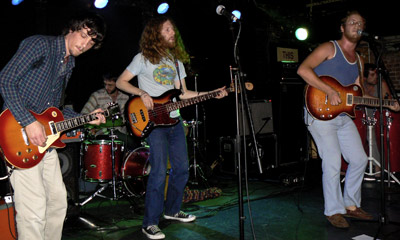 Sort of randomly the third act caught twice so far at CMJ, The Shaky Hands’ country-fied hillbilly rock wasn’t too different from Tuesday at the nearby Bowery Ballroom (QRO Day One recap), though the smaller Mercury did shrink their vistas somewhat.  Still, considering that, of all the CMJ acts seen, The Shaky Hands had probably QRO’s least-liked record (The Shaky Hands, QRO review), catching them twice is a very good sign of improvement and impressing. 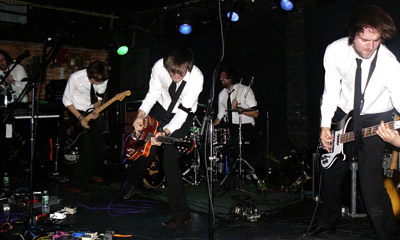 After the third two-timer came the first (and probably only) three-timer, established QRO favorite, iLIKETRAiNS.  Having blown minds wide open not nine hours earlier at R Bar (see above) the British post-rockers smashed and crashed like Amtrak with their tour through some of history’s darker moments, from London’s Great Fire of 1666 to a deranged Bobby Fischer defying the UN embargo to play in genocidal Yugoslavia in 1992.  While the set-list hadn’t changed much from lunchtime, neither did the band’s ability to deliver a blistering live show.  Explosions in the Sky, Do Make Say Think, take notice: like with every other form of rock, the British do post-rock best.  Or as a fan simply put it, “I like iLIKETRAiNS!” 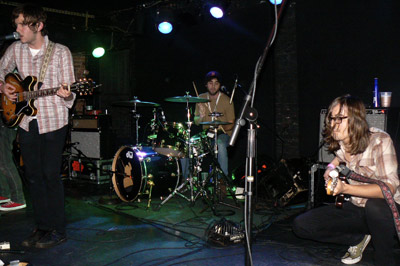 Going in, Cambridge’s The Dead Trees looked like the weak spot on the bill – after not wowing when opening for Albert Hammond, Jr., or Division Day, their ten o’clock spot looked like the moment one would skip out (say, for Mannequin Men or Tulsa) if Mercury wasn’t forbidding re-entries.  Still despite this, and the good-but-not-great Carpé Carpet (as ‘Furvis’ – QRO review), their down-home alt-country/blues benefitted from the small, packed setting at Mercury.  Maybe picking up where fellow country-time, middling album Shaky Hands left off an hour-plus earlier, The Dead Trees brought it and let it all hang out in a quite rockin’ show. 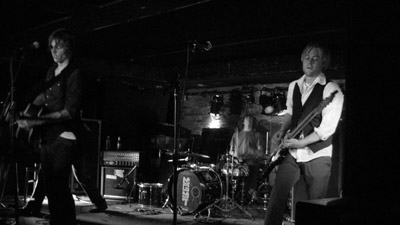 Deep in the ground at Crash Mansion, Wild Light tore through a set their dramatic, angled pop in front of a bemused crowd.  Friday Night in New York helped bolster their cause, as the set kept building steam on the power of sing-alongs. 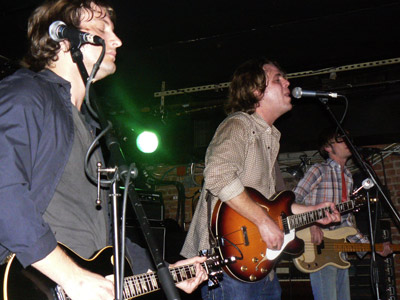 Once again opening for The Walkmen (QRO live review of the last time doing so in New York), The Broken West were on-form with their sixties power-pop.  Originally scheduled to follow the U.K.’s Polytechnic (QRO album review) at midnight, The Broken West got bumped up an hour to serve as lead-in.  In some ways, the band was stuck in a no-win situation: as both The Walkmen and The Dead Trees had undelivered in last Big Apple area performances, whereas The Broken West had given it their all.  Yet the band anything but phoned it in as they took their CMJ slot seriously, hitting up the crowd with great tracks off their last, I Can’t Go On, I’ll Go On (QRO review), and newer. 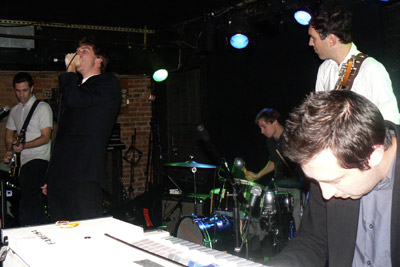 Maybe it was the extra-drunken crowd (and band).  Maybe it was the heightened competition at CMJ.  Maybe it was the late add.  Maybe it was the rain.  Whatever it was, New York now-big-shots The Walkmen hit the Mercury Lounge crowd with their best NYC show this year (QRO photos of the last one).  An understandably packed Mercury saw witness to a looser, dare say it?, drunker Walkmen, who rocked as fine as of the shows of yesterday. 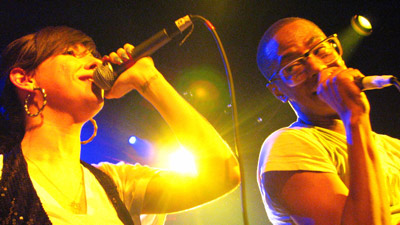 An electro-hop set practically filled the stage with all-stars, as DJs Devlin and Darko were flanked by Naeem, Amanda Blank, members of Flosstradamus, Yo Majesty, Sweatheart, and Benny Blanco.  It got dirty & loud, as it was one of the most energetic shows at CMJ. 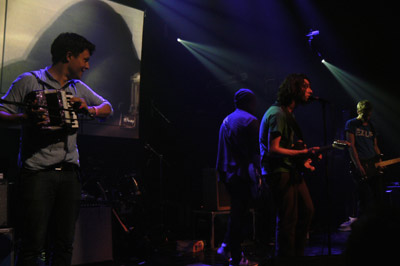 In the unenviable position of being the ‘other’ band next to the “Special Guest” at Blender Late Night Sessions was The Maccabees.  Yet this English band didn’t bat an eye as they delivered some super-fun indie-garage (albeit reminiscent of last night’s opener, Air Traffic – QRO Day Three recap).  This young five-piece was having a ball on stage, and that enjoyment washed over the crowd.  Gramercy Theater was fairly crowded at the time, and they got a treat with The Maccabees. 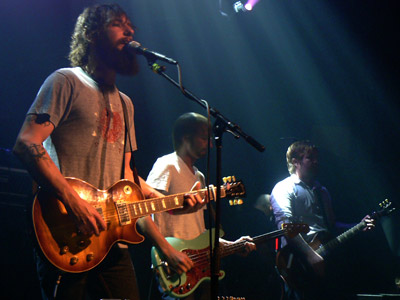 For some reason, Band of Horses couldn’t let it be known through (official) channels that they were playing Blender Late Night Session at Gramercy.  Whatever the reason, everyone there knew exactly who was going on (you wouldn’t show up for a 2:00 A.M. show without knowing who you’re gonna see), and was psyched.  Thankfully, despite the late hour, Benjamin Bridwell & co. were too.  Fresh off the release of the new Cease To Begin (QRO review) and an appearance on Late Show with David Letterman (QRO Indie on Late Night TV listings), Band of Horses had a blast on the fun songs, and a dark ride on the sad ones.  Like their McCarren Park Pool show last summer (QRO live review), the set list included strong Cease tracks like single “Is There a Ghost”, plus your favorites from their breakthrough Everything All the Time, like “Monster” and yes, “Funeral”.

The Mugs at WOXY sessions at White Rabbit at 5:15 PM

Dragons of Zynth at FADER Sideshow at 6:45 P.M. – should have stuck around to see them, instead of waiting around at Mercury Lounge, unable to leave.