Day Two of CMJ is Wednesday – ‘hump day’.  It would seem to be only slightly better than Day One (QRO recap), and certainly not as good as Thursday, Friday, or Saturday.  Yet it’s actually a good day to go strong, as attendees are in the swing of things after Day One, but aren’t burnt out yet like by the weekend.  It’s also a relatively ‘free’ day – you’re not committed to the big showcases of the weekend, and have hopefully caught at least some of your ‘must catch acts’ the day prior.  Plus, one has the freedom on Day Two of missing anyone they want to catch at CMJ, because there’s still three days after this.  Day Two: the secret weapon of CMJ. 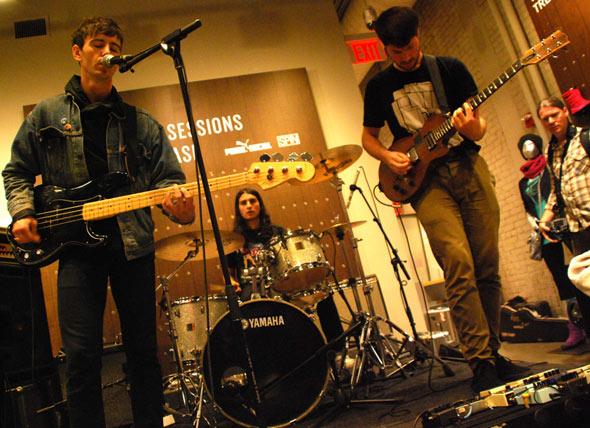 Click here for photos of Weekend at Littlefield in Brooklyn, NY on July 6th, 2011 in the QRO Concert Photo Gallery

Click here for photos of Weekend at Music Hall of Williamsburg in Brooklyn, NY on April 5th, 2011 in the QRO Concert Photo Gallery

Click here for photos of Weekend at SXSW 2011 in Austin, TX in the QRO Concert Photo Gallery

SPIN Magazine & PUMA Sneakers were gracious enough to put on some daytime gigs at the PUMA Store on Union Square.  Unfortunately, this flagship sneaker brand store (not even the only one on that fashionable, high-price block) was ill suited for rock, no matter how hip the sneakers are (or claim to be).  It was effectively just a band playing at the back of the small, thin space, forcing one to get up a little too close to the loud band.  Weekend were good, but you could tell they just weren’t that into it – their customary feedback end (including the singer/bassist putting down his instrument to fiddle with knobs) felt more like a tired shuffle off the stage than a triumphant one. 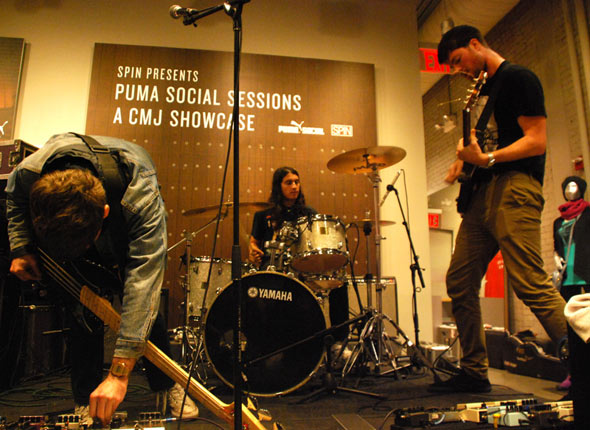 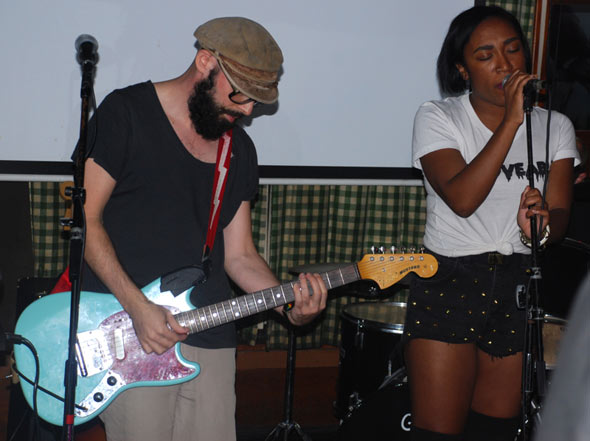 The upstairs at Pianos was packed (admittedly a small space – QRO venue review) for the only CMJ 2011 performance by Pyyramids, the side-project of Tim Nordwind of OK Go (QRO live review) and singer Drea Smith.  So packed it was hard to tell much about them, but they’ve obviously got a lot of buzz behind their debut EP, Human Beings, out soon.

We Listen For You party @ Pianos 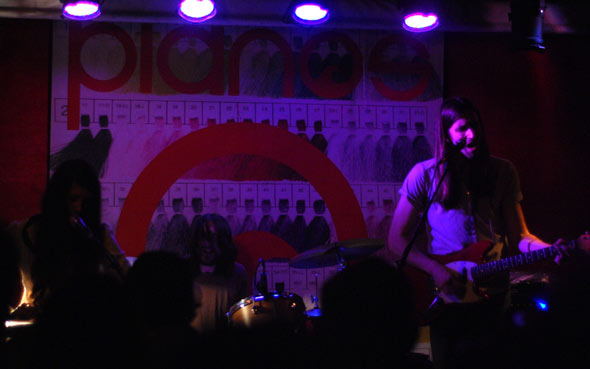 Also packed was downstairs at Pianos, the regular venue space, for Guards.  So packed it was also hard to get much knowledge (or photos) of the band, who sounded kind of alt-folk hippie-collective, but also had a lot of people buzzing. 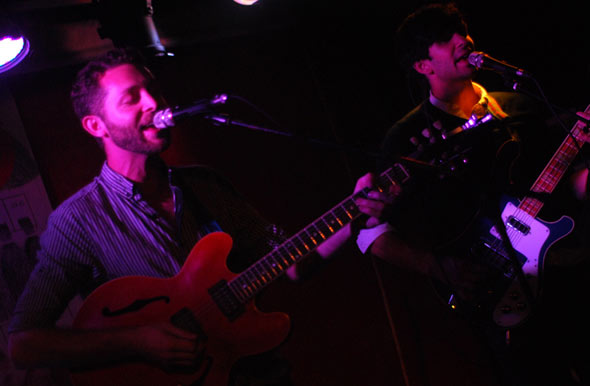 Click here for photos of ARMS at Glasslands in Brooklyn, NY on April 9th, 2010 in the QRO Concert Photo Gallery

Click here for photos of ARMS at Terminal 5 in New York, NY on January 9th, 2010 in the QRO Concert Photo Gallery

Click here for photos of ARMS at Bell House in Brooklyn, NY on October 3rd, 2009 in the QRO Concert Photo Gallery

Click here for photos of ARMS at Bell House on January 18th, 2009 in the QRO Concert Photo Gallery

Click here for photos of ARMS at Union Hall in Brooklyn, NY on April 17th, 2008 in the QRO Concert Photo Gallery

The crowd wasn’t as thick for ARMS – and those that left missed out on a great set, one that could actually keep you there from start-to-finish (not an easy task at CMJ, with all the other choices beckoning after you’ve caught a bit of any one act).  So good, in fact, that it made even this correspondent stop thinking of frontman Todd Goldstein as "former guitarist of the late Harlem Shakes" (QRO spotlight on) – and this correspondent was obsessed with the lamentably-defunct act (QRO tribute – 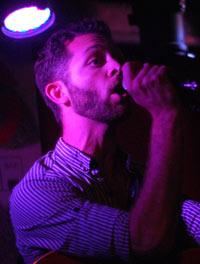 Goldstein has grown into his frontman role, as ARMS has grown from his solo project to a full-fledged band (he still kind of looks like a younger Detective Lassister from Psych).  The whole set was a nice mix of energy & skill; sophomore LP Summer Skills is out on November 8th. 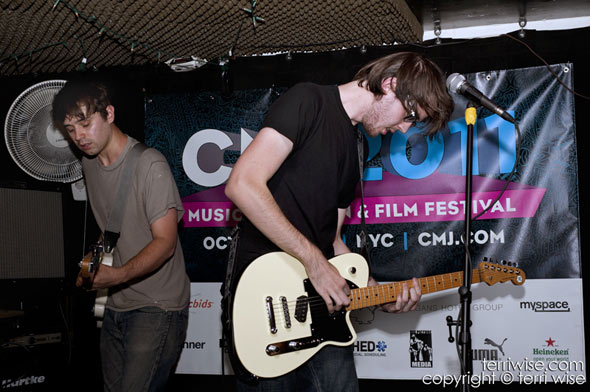 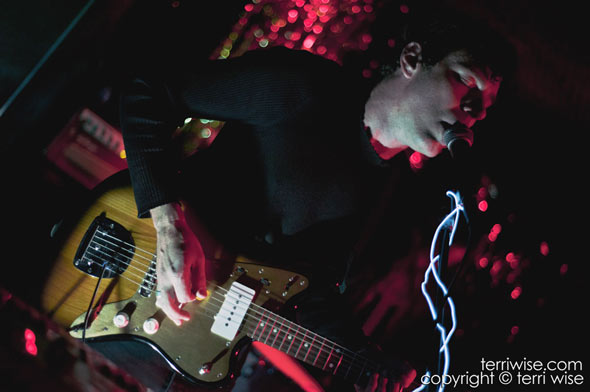 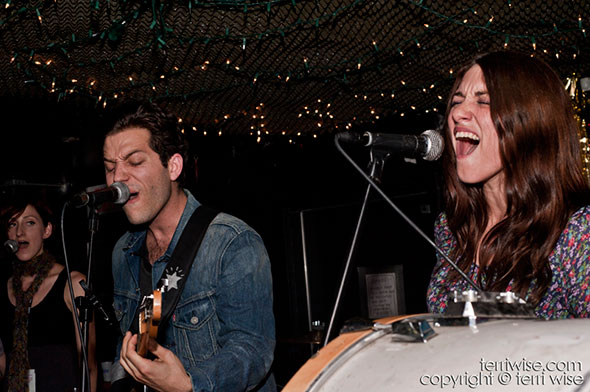 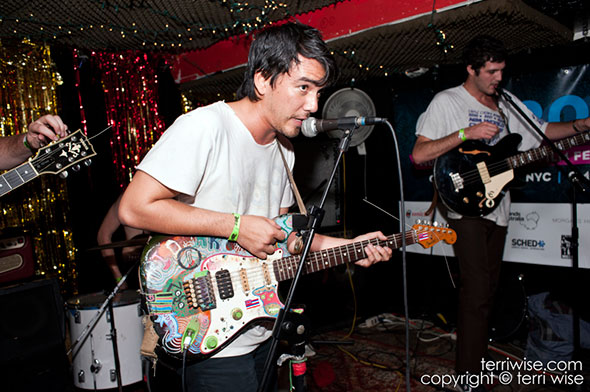 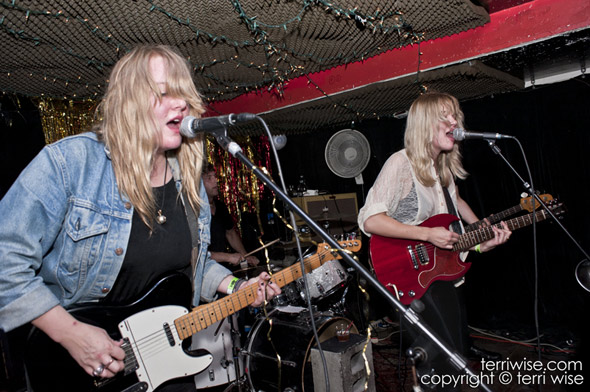 Instead of trying to go from showcase-to-showcase, party-to-party, first half of one set-to-back half of another, plumped down at one venue/showcase for the entire night, and glad I did.  The Ovenfresh/Tinderbox showcase at Littlefield had a collection of acts that had wanted to see at CMJ, and had some free beer as well.  Of course, Littlefield (QRO venue review) is a bit off the beaten track (at least I didn’t go all three wrong directions before heading the right way out of the subway, as usually do when arriving in the Gowanus/Park Slope area), so kind of couldn’t wander. 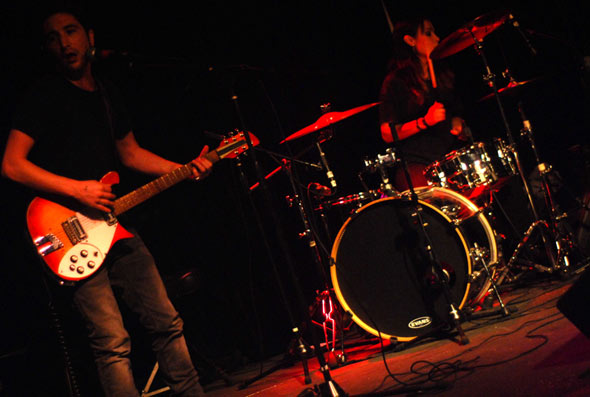 Click here for photos of The Wicked Tomorrow at Northside 2010 in Brooklyn, NY in the QRO Concert Photo Gallery

That early start and distant location did mean that there weren’t a lot of people at Littlefield for first act The Wicked Tomorrow (even the free beer hadn’t started yet).  The garage-grit duo wasn’t a revelation, but guitar-and-drums duos rarely are, and the singer did have some humor, thanking everyone including Miller High Life ("The champagne of beers") and commenting on the need to plug everything at CMJ.  He also broke a string during a song, tried to keep going, but had to give up, and at least made a joke about it. 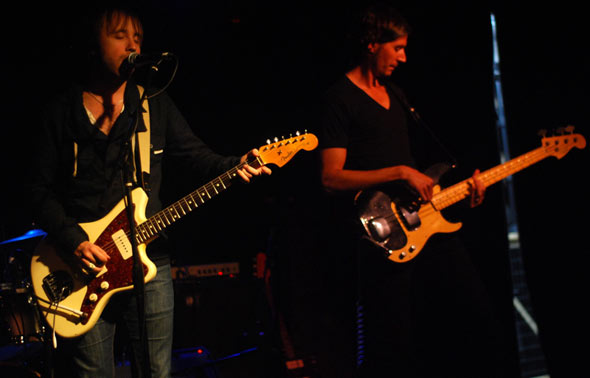 Another interesting facet of this showcase was that it was heavy with the ladies, still somewhat an outlier in ‘enlightened’ alternative music.  But all XY was Blackbells, whose seventies rock was reminiscent of Free Energy (QRO album review – QRO photos on stage at Littlefield), though with a bit less fun, and a bit more grit. 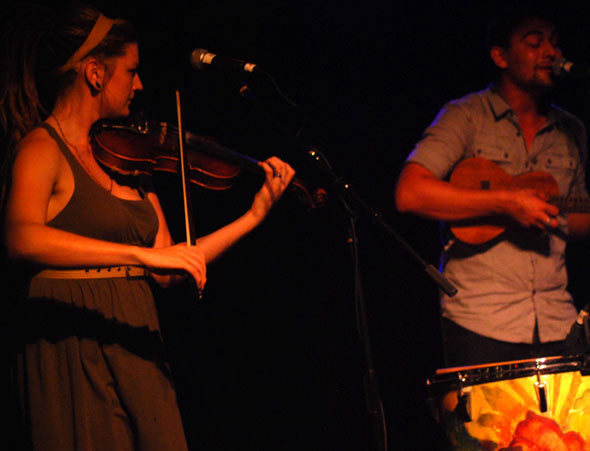 The alt-folk collective style has gotten very big in recent years, and fitting right into that is Denton’s Seryn.  Their Americana multi-instrumentalism, using old-timey backwoods instruments alongside modern ones  – as well as having a female member – was reminiscent of Freelance Whales (QRO album review), Fanfarlo (QRO album review), or The Low Anthem (QRO spotlight on).  But that’s a good group of acts to be in the same league as… 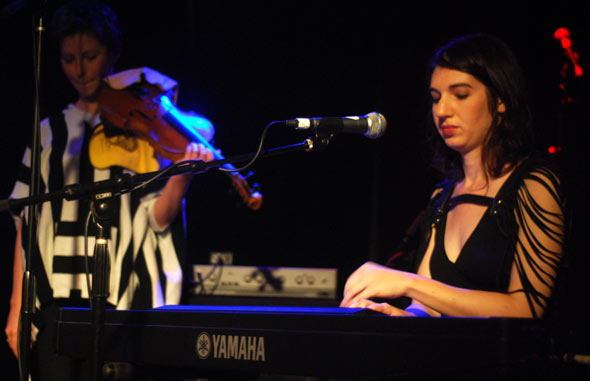 Click here for photos of Alyson Greenfield at Tinderbox 2011 Festival in Brooklyn, NY in the QRO Concert Photo Gallery

The organizer of the showcase was Alyson Greenfield, who had organized the Tinderbox Music Festival last month 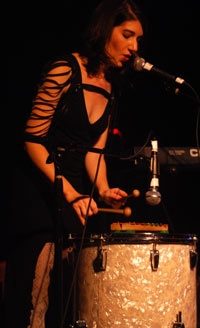 (QRO recap).  Her set was similar to then, extremely diverse in terms of instruments & guests, from starting with a beatboxer to ending with a string section & drums.  It was also extremely diverse in terms of what she played herself, from floor tom drum to glockenspiel – she remarked that the latter, "Is an incredibly trendy instrument in bands right now, but I play it solo!"  And she played it to cover Coolio’s "Gangster’s Paradise", from her Rock Out With Your Glockenspiel Out album of hip-hop covers done on glockenspiel.

Greenfield might be too diverse a musician – what does she do when she’s not throwing the show in her hometown & has all her friends on stage or in the crowd?  But she’s got a great stage presence, covering any stylistic whiplash live, and looked "fashionable" [note: her word, but she wasn’t wrong] in her handmade leather accessory from Gina Schiappacasse of Apartment 48 by Kaci Head. 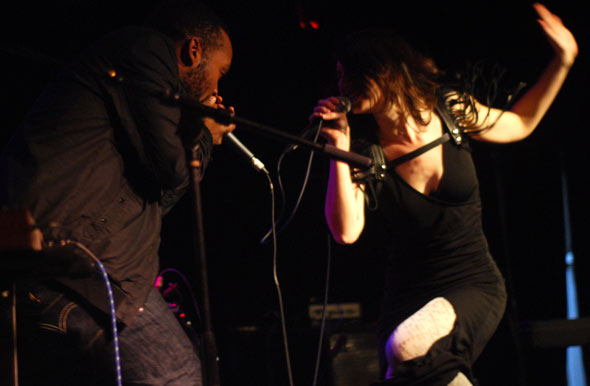 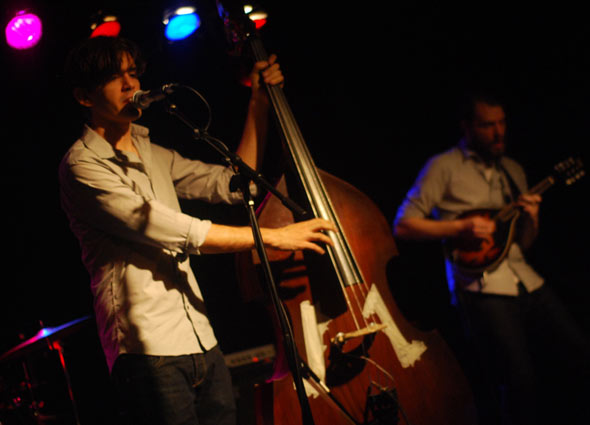 Another alt-folk collective, this time closer to home (originally from Princeton University).  One always has to appreciate the upright bass, but by this point on the evening, was a little hard to remember Miracles of Modern Science. 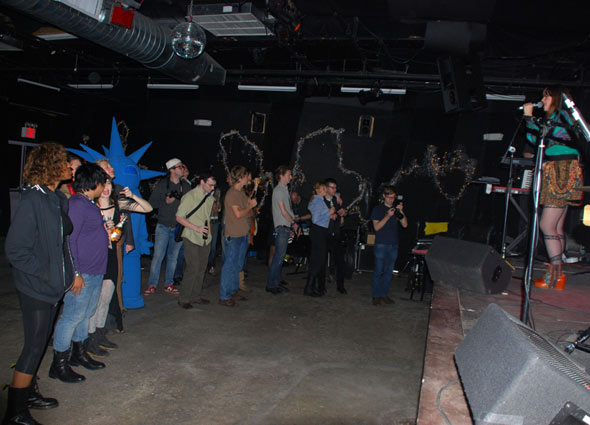 Remembered Fallulah even less (still not sure if that’s how to spell their name), as they weren’t on the schedule, and their performance seemed to come as even a surprise to the thought-they-were-playing-next Zambri (see below).  But I think they’re from Denmark, which always gives bonus points (plus guy in strange costume in the crowd). 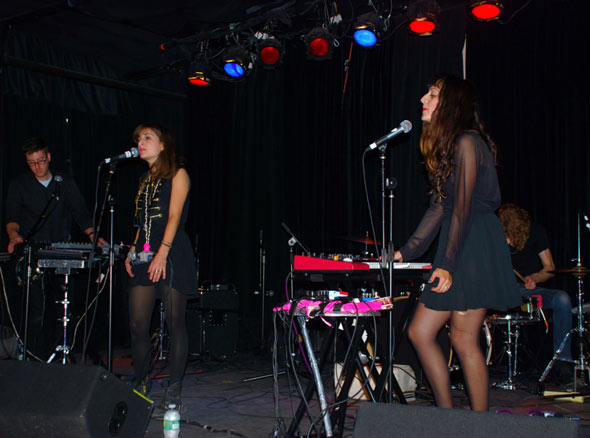 Click here for photos of Zambri at Northside 2011 in Brooklyn, NY in the QRO Concert Photo Gallery

Click here for photos of Zambri at Pianos in New York, NY on November 3rd, 2010 in the QRO Concert Photo Gallery

Click here for photos of Zambri at CMJ 2010 in New York, NY in the QRO Concert Photo Gallery

Click here for photos of Zambri at CMJ 2009 in New York, NY in the QRO Concert Photo Gallery

Click here for photos of Zambri at Pianos on April 12th, 2008 in the QRO Concert Photo Gallery 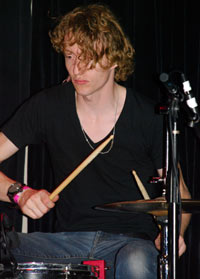 It feels like it’s been a while since Zambri was its own outfit, and not just seeing the two leading ladies singing with their close friends Hooray For Earth (QRO spotlight on).  Zambri now having Seth Kasper on drums, of the late Wild Light (QRO spotlight on), but before that of Hooray (QRO live review with Hooray), also kind of doesn’t help differentiate the two groups. 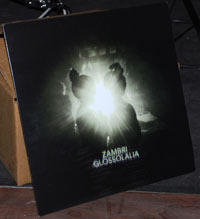 But Zambri are ‘back’, with the new Glossolalia EP out a few weeks after CMJ, and still strong.  Sisters Cristi Jo & Jessica Zambri are great frontwomen (even if you struggle to tell one from the other – which one is married to Hooray’s Noel Heroux?…), with strong voices to match their strong electro sound, a sound that manages to be neither simple electro-dance nor over-complex experimentation, but the sweet spot in the middle.  The late hour meant that not enough people caught the set (Littlefield had filled up during the evening, but also trickled out as the night went on), but they were playing like eight or ten shows at CMJ 2011, so had to get a ton of exposure at the festival. 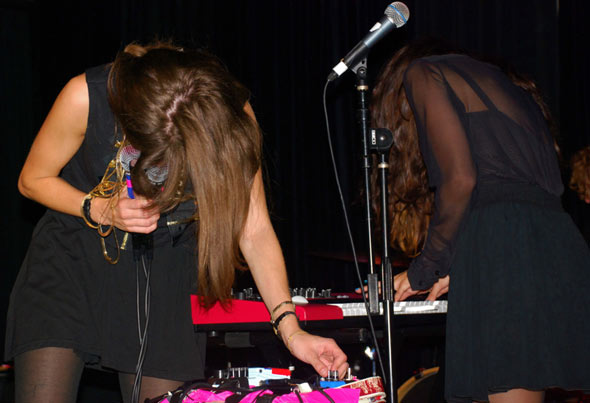 -It was a little weird seeing Tim Nordwind of Pyyramids/OK Go on Day Two, because earlier in the day, had turned on the TV and cable was running a repeat of NBC’s Las Vegas – which featured OK Go.  It ended with a performance by the band, and Vanessa Marcil & Nikki Cox, who had been vying for the band’s attention the entire episode, kissing and making up/out.

-Greenfield had set up an open bar at the Littlefield showcase by buying some cases of beer, and usually that ‘8:00 PM until gone’ kind of open bar doesn’t last long, but it did this night, running out only near the end of the seven-act showcase.  The light initial attendance, lack of awareness about the free beers (saw many people paying for other drinks, when they could have had beer for free), and relative low price of beers at Littlefield anyway (the smaller/farther out the venue, the lower the drink price) all helped it last.  Greenfield probably learned the value of drinks from her experience at Tinderbox, where venue Knitting Factory (QRO venue review) had screwed up and didn’t have their liquor license renewed in time.

-The Wombats (QRO album review) @ Webster Hall (QRO venue review).  One of those bigger shows that just happened to be a part of CMJ, even if you knew you were a Wombats fan upon moving to New York, you’d have had to get there early to use your badge for entry, and thus would have had to sit through the extremely overrated Postelles (QRO photos) – and you’ve likely had to sit through them before, as they’re seemingly always opening for someone that you like (and never trying to draw their own crowd).