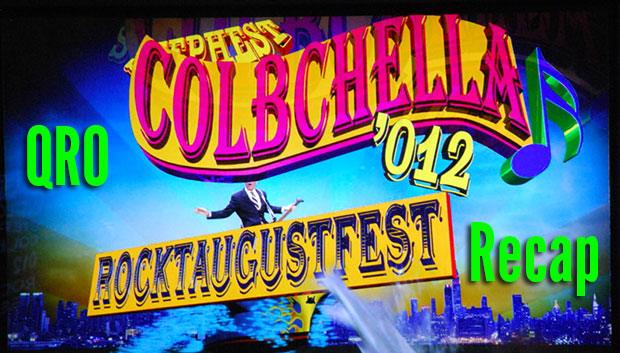 Like America, Dr. Stephen T. Colbert, DFA has already conquered so much.  He has already dominated space (with his C.O.L.B.E.R.T. treadmill aboard The International Space Station), The Olympics (single-handedly saving the gold medal-winning U.S. speed skating team), ice cream (Ben Jerry’s ‘Americone Dream’), and, of course, America itself.  But on Friday, August 10th, Colbert took on the most godless of all fields, music, with Pepsi presents StePhest ColbChella ‘012 Rocktaugustfest aboard The Intrepid in New York, with The Flaming Lips, Santigold, Grizzly Bear, fun., Grandmaster Flash, and more.

[note: the segments filmed aboard The Intrepid on August 10th will be airing on The Colbert Report, August 13th to 16th, along with segments taped those days.  If you don’t want to know ahead of time – or don’t want a peek behind the curtain at the making of television – read no further.  Think of this as the Colbert version of the Olympics spoiler…] 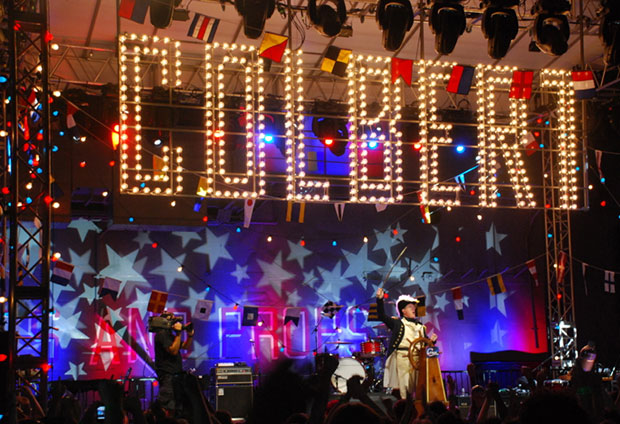 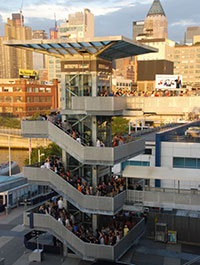 ColbChella took place on the flight deck of The Intrepid, a WWII-era aircraft carrier that has served as a floating museum in the Hudson (just off 45th Street) for years – and recently welcomed the addition of Space Shuttle U.S.S. Enterprise.  The Intrepid itself is actually very firmly in place and connected to the dock (and one dock north of Hudson River Park’s Pier 84 – QRO venue review) – there was no actual sense that one was ‘floating’.  However, 1500 lucky ticket recipients (who’d managed to get online tickets for the split second they were available every night at 11:30 PM EST), plus press & VIP, were surrounded by vintage aircraft, as well as the large stage with “COLBERT” in lights above it.  The fans came in a flood once they were given permission to board, with drink & snack tickets [two drinks & a snack for General Admission, many more for VIP, but none for press…] and a love for music & Stephen Colbert. 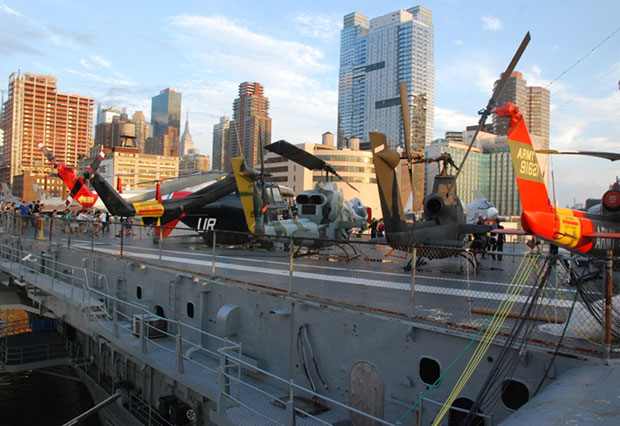 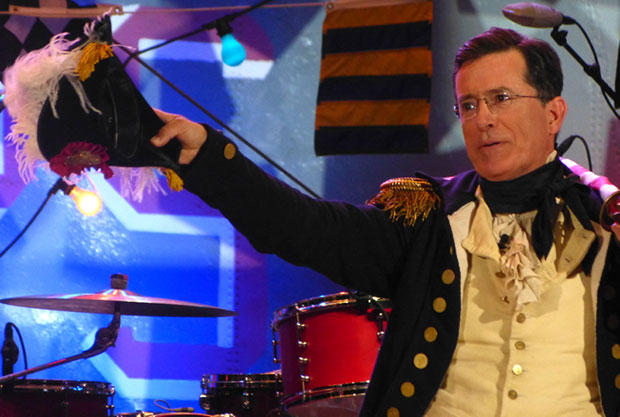 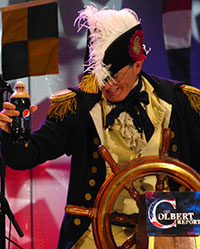 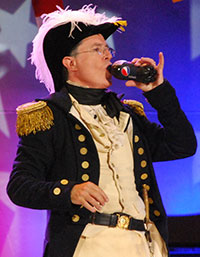 After a DJ set and warm-up comedian, Colbert entered in full eighteenth century naval regalia (including sword & tassels), behind a fake steering wheel – a costume he wouldn’t remove for the entire night.  He did intro segments for all four days (“This week is going to fly by so fast, it’ll feel like it all happened in one night…”), ending each by throwing to “a man I couldn’t be here without, Stephen Colbert,” where he would point to the bridge – on the show, he will 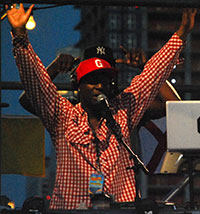 throw to himself on 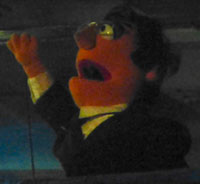 studio, but on The Intrepid, he threw to mock versions of himself in the bridge, including a puppet, a cut-out, and a broom with googly eyes.  He would always make sure to thank the most essential ingredient in a music festival, corporate sponsorship, in the form of Pepsi, and take a drink from a Pepsi bottle (and wasn’t even thrown off the

first time, when it bubbled out of the bottle upon opening, “Is obviously very happy to see me…”, or when he asked someone to throw him a Pepsi and was pummeled by thrown full bottles…), as well as point to his second-in-command, Lieutenant Grandmaster Flash (in the “Tower of Power”), who also laid down beats between filmed segments. 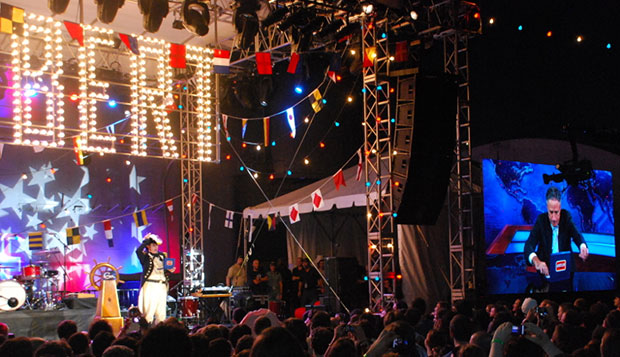 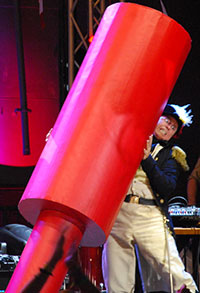 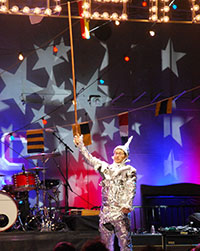 For Monday night, Colbert welcomed a satellite link-up with The Daily Show‘s Jon Stewart, where they engaged in a game of Battleship – Colbert missed, but Stewart had a big hit, with life-size red peg.  For Tuesday night, Colbert & Old Glory came out and declared the Hudson River international waters, where anything goes. 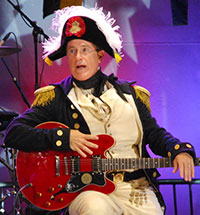 For Wednesday night, Colbert reassured the fans aboard the steel deck of The Intrepid that they shouldn’t 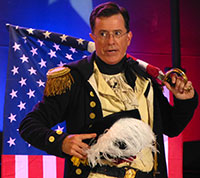 worry about lightning strikes because he’d installed a lightning rod – Jay the Intern.  And for Thursday night, Colbert came out to a guitar and tempted to play it – but did not… 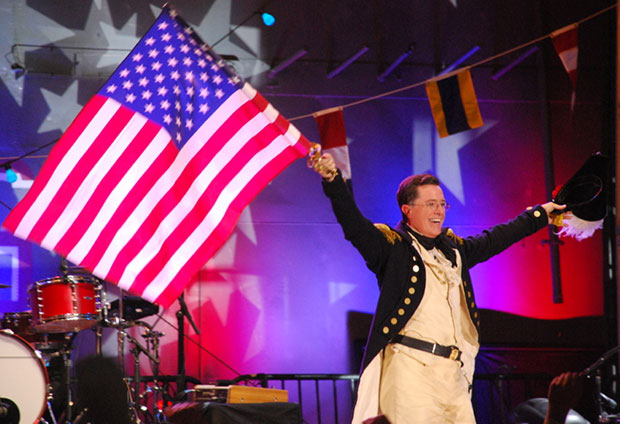 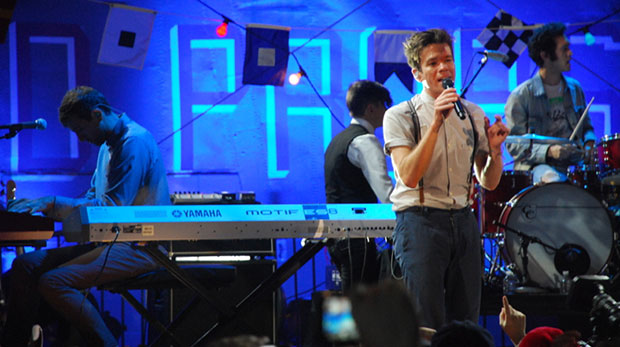 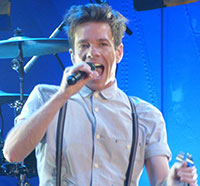 After the introduction(s) – and Colbert & stage manager Mark singing The National Anthem (with Grandmaster Flash beats) after demanded by the crowd – came the music.  While the interviews had been taped earlier on The Intrepid (“In the space capsules”), each band was scheduled to play three songs live – one for the show (introduced by Colbert), one for the bump, and one for live streaming on The Colbert Nation website (along with the bump song).  fun. had an energetic ‘Monday night’ performance, even if one couldn’t shake the feeling that they were the least-accomplished, most pop flash-in-the-pan act of ColbChella. 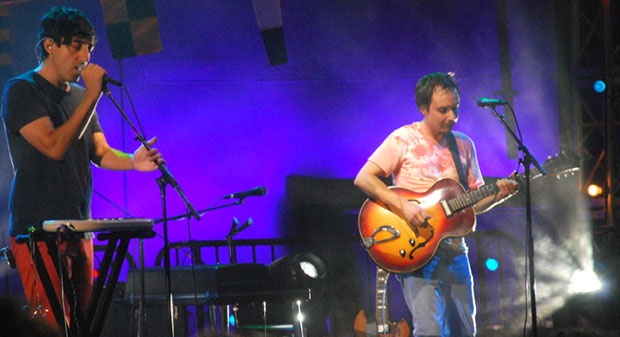 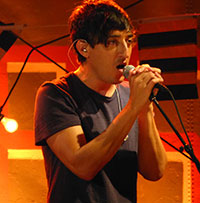 Still, at least fun. were able to get through their three songs without a hitch – Grizzly Bear had to play their first song a second time, and had to play their second song for a second time.  Of course, it was the acclaimed artistic Brooklyn act’s first show in two years, “And what better place to have your first show than on national television?”  Indeed, the second song was a new one from the upcoming Shields (which was given the ‘Colbert Bump’) that they’d never played live before.  Though it was shocking to see a bear of any kind near Stephen Colbert… 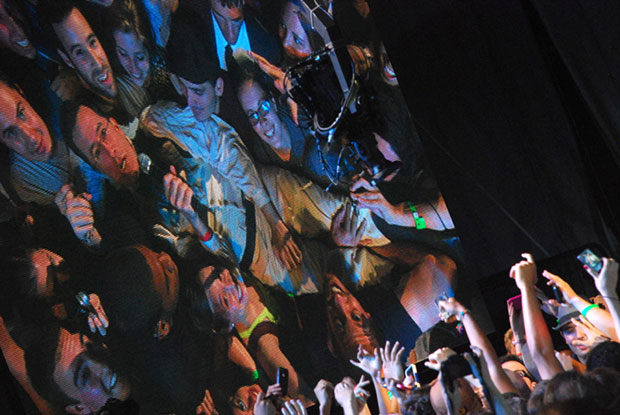 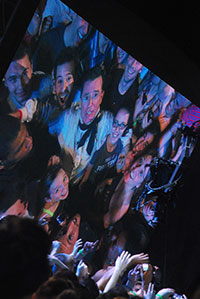 After Grizzly Bear, the crowd was shown the video of Colbert’s tour of The Intrepid (with an Intrepid veteran and a very pregnant curator), but rain had gotten into one of the pedals of the upcoming act, forcing an even longer delay.  Rather than let things drag, Colbert filmed not one, but two goodbyes (which were sponsored by T Mobile, because “There’s only one thing better than a corporate sponsor – and that’s two corporate sponsors…”) – and both were from the crowd.  It was a tricky thing to arrange, speaking into an overhead camera amongst excited fans (and one very serious security guard…) – when he couldn’t get his audio to work the first time, Colbert was lifted by fans to do a ‘crowd surf goodbye’! 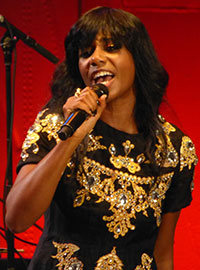 Like Grizzly Bear, Santigold had to do her first two songs again (though did it ‘first song, second song, first, second’ rather than ‘first song twice, then second song twice’, for a slightly less repetitive feel), but her dancers didn’t wilt (though looked incredibly serious themselves whenever performing – and Santigold didn’t let the fans on stage like she usually does – QRO photos).  Ms. Santigold could use to learn some between-song banter, however, as she admitted to not knowing a single joke & had to ask for one from the crowd – and the one from the crowd was the old talking tomato joke from Pulp Fiction (Colbert came out to save her with the equally-old ‘assaulted peanut’ joke).  After Santigold, Colbert did another goodbye, this time up in the ‘Tower of Power’ with Grandmaster Flash. 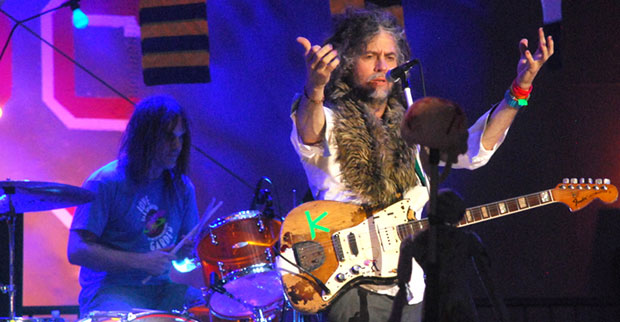 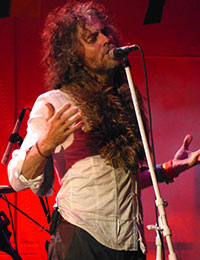 But the best was yet to come, because The Flaming Lips still had to play.  The group couldn’t do their legendary stage show on such a (relatively) small set, but Colbert still got the crowd that was chanting “Stephen!  Stephen!” to change it to “Wayne!  Wayne!  Wayne!” (“They’re an easily manipulated mob…”), and the ultra-professionals needed no second takes.  What’s more, singer/songwriter Wayne Coyne & Colbert ended the night in the greatest possible way: for the final ColbChella goodbye, Coyne & Colbert each entered one of The Lips’ famed giant plastic hamster bubble and ventured out over the crowd!  Colbert was able to stand (after getting pre-bubble advice from The Lips’ own stage crew) in the bubble, above the crowd, wearing full regalia, like some acid trip version of Admiral Nelson, to send off ColbChella ‘012, before he & Coyne traversed the top of the crowd in their bubbles. 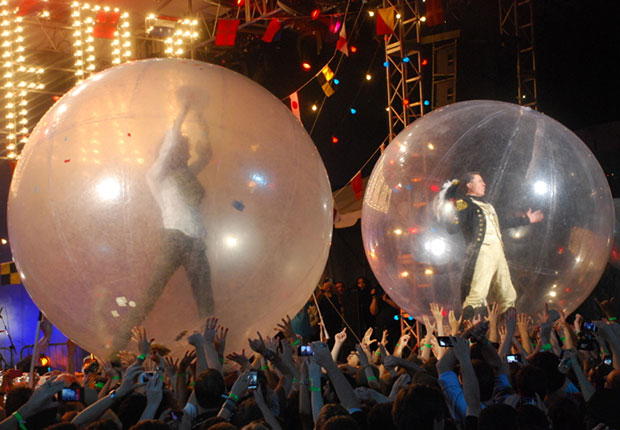 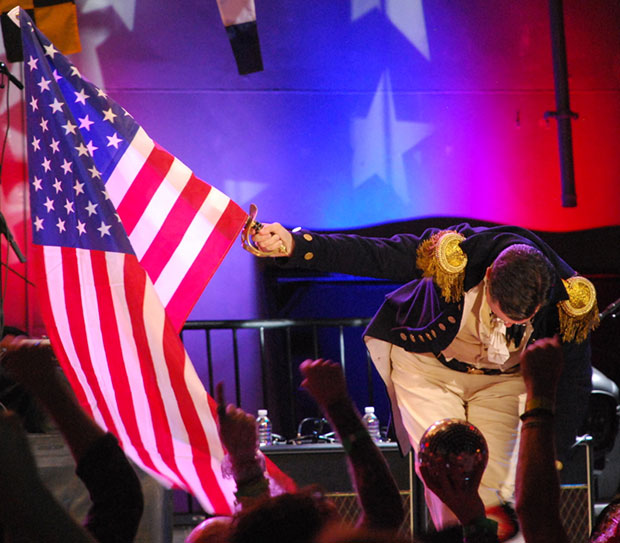 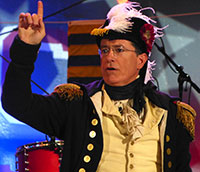 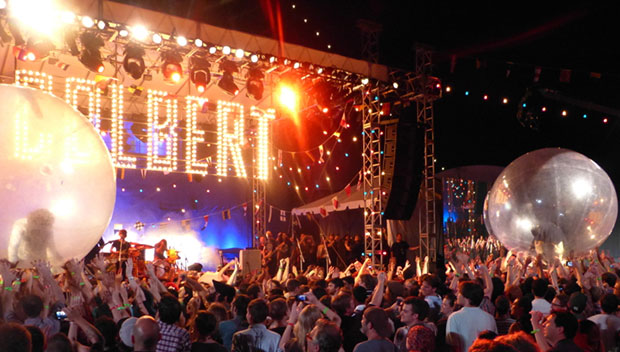