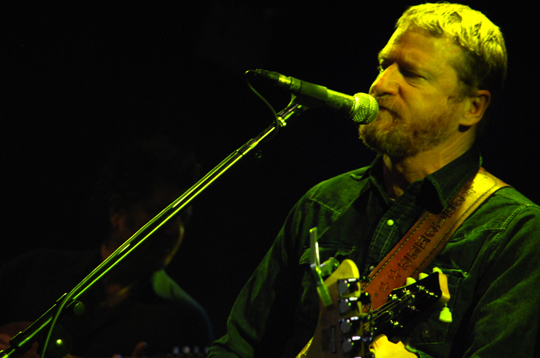 David Lowery made a name for himself as frontman for Santa Cruz’s Camper Van Beethoven in the eighties, adding irony and oddity to the group’s singular fusion of alt, folk, punk, jam, country & more.  He then built up even more with Cracker in the nineties, with a strong base of ironic alt-country-rock.  After rarities & box set Camper releases in the new millennium, Beethoven got back together for 2004’s New Roman Times, which nicely updated their sound for the Bush era.  Meanwhile, Cracker temporarily went incognito as country covers outfit ‘The Ironic Mullet’ with 2003’s Countrysides, but were back in the swing of things, most recently with last year’s post-Bush Sunrise In the Land of Milk and Honey (QRO review).  The two acts were never that far apart musically, but always distinct, and would play together at the annual ‘Camp-Out’ near Pioneertown in southern California, where Lowery first met Cracker guitarist Johnny Hickman (QRO interview).  But this newest decade is seeing the two acts take to the road together for the first time, and they hit New York’s Highline Ballroom on Friday, January 15th. 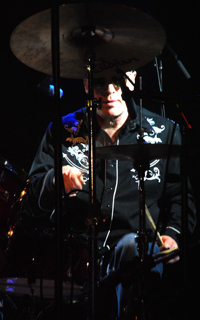 Cracker & Camper share more than just Lowery and SoCal roots.  For one, there’s drummer Frank Funaro, who’s been with Cracker since 1996, and Camper since 2000.  Kenny Margolis joined Camper that same year on keys, but also often serves as Cracker’s touring keyboardist (as well as accordionist and even cowbell-ist).  Meanwhile, Camper bassist Victor Krummenacher played in Cracker as recently as 2006.  And Grammy-nominated artist David Immerglück has also helped out in both acts.

But, most importantly, their audiences also significantly overlap, from the punk-meets-hippie of Camper to the alt-meets-country of Cracker.  And, whichever act brought you in, you’re probably getting on in years, at least compared to your average rock show crowd (the tour didn’t shy away from this, booking the classier & older-drawing Highline – QRO venue review – and selling out the night) – there were lots of bald (and white-haired) heads, older men & women; a little more backwoods (saw at least one lady with an off-colored tooth), less Williamsburg, more Hoboken.  Both Camper & Cracker are also relative ‘cult’ bands – the kind of bands who have fans that are 100% into them, but no one else listens to them at all (think Lost fanaticism, but for music).  However, for those ‘cult’ fans, you couldn’t have asked for anything more than the two acts coming to theater near you.

Click here for photos of Camper Van Beethoven, on tour with Cracker, at SXSW 2010 in Austin, TX in the QRO Concert Photo Gallery

Going in alphabetical order, Camper Van Beethoven was up first. [note: this was no ‘opening set’, as the band played for well over an hour] They curiously began their set with an instrumental, “Abundance” (from 1986’s II & III, the only piece all night from that record), then not one, but two covers, as they took punk rock classics “White Riot” & “Wasted” (by The Clash & Black Flag, respectively, if you had to be told…) and joke-jammed them.  That cover of “Wasted” had originally featured on their 1985 debut, Telephone Free Landslide Victory, and that album was most featured in Camper’s set, especially at the beginning & end.  Other early in the set, earliest record numbers included “Ambiguity Song” and “Take the Skinheads Bowling”, back-to-back, yet before either, Camper did another instrumental, “R ‘n’ R Uzbekistan” (from their newest, New Roman), and would later also include fellow instrumentals “Mao Reminisces About His Days In Southern China” (off their self-titled 1986 release) and Telephone‘s “Skinhead Stomp”.  Guess Lowery really did need to rest his voice… 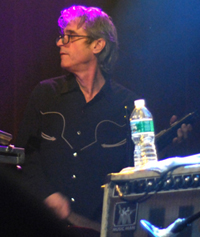 Whatever the reason(s) for Lowery’s relative reticence during the Camper set, that allowed the rest of the band to shine.  Instrumentals naturally favored violinist/and more Jonathan Segel, folk-experienced but also alt-hippie, like the soundtrack to Ken Burns’ Civil War, if performed by a hippier version of Owen Pallett (Final Fantasy – QRO album review).  Guitarist Greg Lisher had numerous solos on which to wail, while Krummenacher (also of McCabe & Mrs. Miller – QRO photos, opening for Camper) yelled particularly hard during Telephone‘s “Club Med Sucks” (but so did the crowd), and even Immerglück got to not only rock out on mandolin (the most ‘rocking out’ of all instruments…), but also slide guitar. 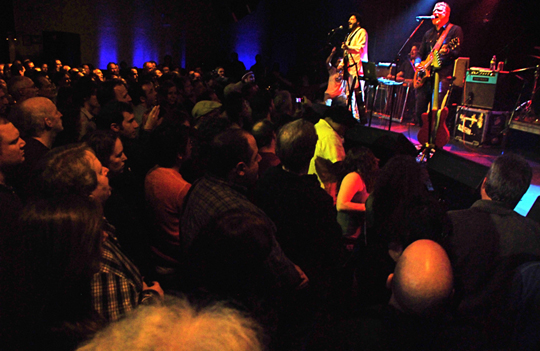 Much of the set list was the same as Camper’s 25th anniversary tour last year (QRO review), albeit that it had to be shorter than those epic shows – they replayed not just singles like “Take the Skinheads Bowling”, but also instrumentals & covers (indeed, “White Riot”/ “Wasted”/ “Shut Us Down”/ “R ‘n’ R Uzbekistan” were in the exact same order).  But that meant that they still hit up greats like “Tania”/ “Eyes of Fatima (Pt. 1)”/ “Eyes of Fatima (Pt. 2)” from 1988’s Our Beloved Revolutionary Sweetheart (same order as previous tour & on record), Camper‘s actual “History of Utah”, and Beloved‘s beloved “One of These Days”.

Camper Van Beethoven playing “When I Win the Lottery” live at Highline Ballroom in New York, NY on January 15th, 2010: 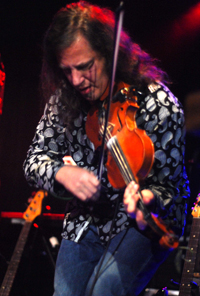 Telephone and Beloved dominated the set, over later records – not only pre-break-up Key Lime Pie, but also reunion New Roman Times.  The formers limited exposure was somewhat understandable (the band probably doesn’t have the best memories associated with that record), but still regrettable, as it’s their best.  They still played not only classic single “When I Win the Lottery”, but also “Pictures of Matchstick Men” and the couldn’t-be-more-beautiful, couldn’t-be-more-touching “All Her Favorite Fruit” (it’s so good that even Senator Harry Reid could get away with singing its line “When negroes blink their eyes / They sink into siesta / And we are rotting like a fruit / Underneath a rusting roof”).  New Roman‘s shorter shrift was a little more surprising, especially as the three songs that were played included the instrumental “R ‘n’ R Uzbekistan”, as well as the title track and “The Long Plastic Highway”, which was a little long. 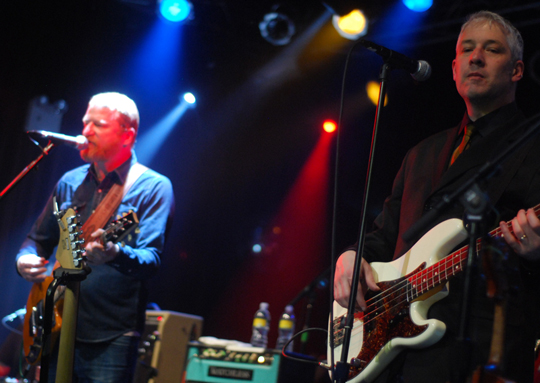 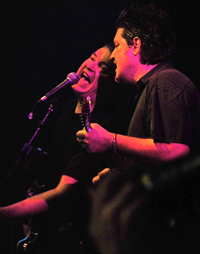 But Camper Van Beethoven have so many great songs, they could play for three hours, and there’d still be songs you wished that they had played (“Good Guys & Bad Guys”, “Crossing Over”, “Jack Ruby”, “Sweethearts”, “Militia Song”, “(We’re a) Bad Trip” and “Where the Hell Is Bill?” off the top of the head…).  And they still had some nice surprises, like back-to-back “Turquoise Jewelry” & “Joe Stalin’s Cadillac” (though the latter’s references – General Pinochet, LBJ – are as out of date as Cadillacs…).  No fan could have been disappointed by the set as it would to a close with sweet finisher “Seven Languages”. 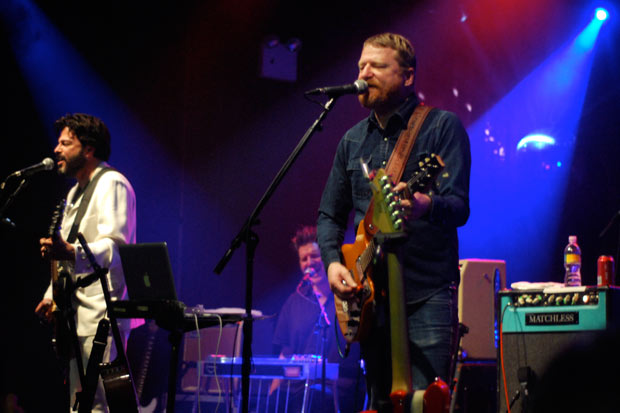 After a short break, Lowery welcomed the audience to “The Cracker portion of tonight’s show.”  While he had been reticent during the ‘Camper portion’, Lowery was anything but as frontman for Cracker, starting with his introduction of his duet with Hickman (who was sporting an ultra-fine white suit), “Friends”, from Sunrise (though it was originally on Hickman’s solo release, Palmhenge).  But the set list itself (though there was no actual set list, unlike with Camper – QRO photo) was weighted towards earlier work, like Camper’s had been – mostly from Cracker’s first two records, 1992’s self-titled debut and 1993’s Kerosene Hat.  But those have classics like “I See the Light”, “Sweet Potato” and “This Is Cracker Soul”, which all followed “Friends”. 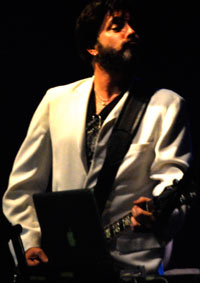 Note: later obtained a recording of the speech, thanks to nyctaper (link):

Click here for photos of Cracker, on tour with Camper Van Beethoven, at SXSW 2010 in Austin, TX in the QRO Concert Photo Gallery

Click here for photos of Cracker, at Highline the last time they were in New York, on June 25th, 2009 in the QRO Concert Photo Gallery

Click here for QRO’s review of Cracker at Maxwell’s in Hoboken, NJ on April 25th, 2007

That was the first of three from Kerosene, though the other two, “Lonesome Johnny Blues” and “Wedding Day”, were sung not by Lowery but by Hickman (while the former is more obviously fitting, it was the latter where his gritty voice shined).  Guess Lowery did have to save his voice, after that last story, and another one, this time about Cracker’s tour of Iraq, playing for the troops.  The crowd’s cheer for playing for the troops felt neither obligatory nor chest pumping, but natural – kind of like the idea of Cracker touring army bases.  Indeed, Lowery remarked that, because so many of the men and women serving over there are not fresh infantry recruits, but from The National Guard and The Reserves, they tended to be older (“our age”), and much more familiar with Cracker than he’d anticipated (would even ask if they would play any Camper Van Beethoven songs).  Not that Cracker didn’t meet some young infantrymen, the first of whom asked, “Are you the real Cracker?”  When Lowery responded that, yes they were, the young man replied, “My parents are going to flip!”  And this happened many times, Cracker playing to Reserves & Guard fans, and Army kids whose parents were fans.

Note: later obtained a recording of the speech, thanks to nyctaper (link): 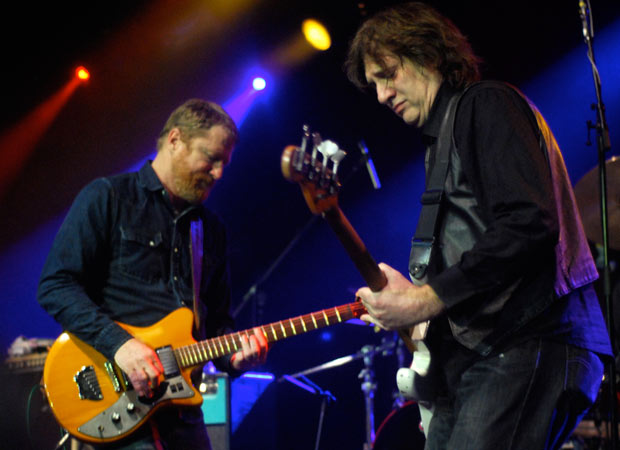 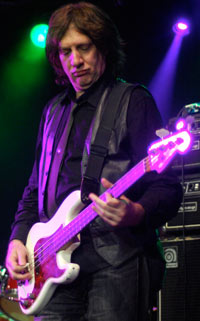 The tour of Iraq was instigated by Sunrise‘s “Yalla Yalla”, and its use of military slang – “We were told to put our boots where our mouths were” – and it was, like “Euro-Trash Girl”, kicked up by Lowery’s story.  Also aided by his introductions were “Merry Christmas Emily” – “about a Christian-Jewish relationship in Tucson, of all places…” – and “Gimme One More Chance” – the riff of which Immerglück apparently wrote when he was fifteen.  Both of those were the only songs that night played from their respective albums (2002’s Forever and 2006’s Greenland), and there were none from the one in between, Countrysides, despite one drunken fans repeated yells for “Duty Free” (though he wasn’t wrong in wanting it…).  Cracker did surprisingly hit up a cover of Bob Dylan’s “The Man In Me”, followed by the heartbreaking “Big Dipper” – the only piece from 1996’s The Golden Age (but another wise choice – one woman literally said, “My favorite Cracker song is right here.” – but your correspondent’s favorite had to be Cracker‘s “Happy Birthday To Me”, what with it being exactly a week since… Elvis’ birthday).

Cracker playing “Merry Christmas Emily”, for the first time ever in New York, live at Highline Ballroom on January 15th, 2010:

Like with Camper, there were going to be a ton of songs that you’d wished that they’d played (“Mr. Wrong”, “Where Have Those Days Gone”, title tracks from Forever, Gentleman’s Blues, The Golden Age, Kerosene Hat, anything from Countrysides…) – it was surprising that Cracker didn’t do Sunrise single “Turn On Tune In Drop Out With Me”, considering it has led to the band’s best record sales in over a decade.  But following first ‘hit single’ “Low” from Kerosene, and Blues‘ always welcome “Seven Days”, Cracker did return to the stage for very early song “I Ride My Bike”.  Then Camper’s Lisher, Segel and Krummenacher took the stage, with Hickman & Margolis staying on (and Cracker bassist Sal Maida handing his axe to Krummenacher – who he’d actually taken over for on bass in Cracker in 2006 – they were also both wearing ties…) for a massive instrumental finish. 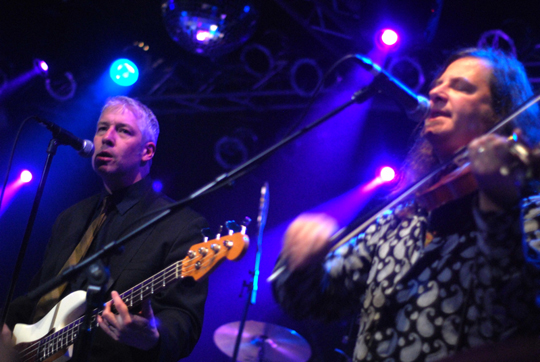 Click here for audio recording of Camper Van Beethoven from this show thanks to nyctaper.com

Click here for audio recording of Cracker from this show thanks to nyctaper.com

Unlike most shows, where there’s lots of going back to the bar for another drink, talking to your friends, moving to a different angle, etc., the crowd that night was rooted in place (the most movement came from some hired photographers, including one rather large fellow with a bad page-boy haircut who would come in and out of the tight-packed front center, and another who’d get a little too close to the musicians, and little too much in your view).  The two-plus epic sets left the loyal crowd with aching legs, but very happy ears.