<img src="https://www.qromag.com/wp-content/uploads/2012/05/crocodilesmay12.jpg" alt="Crocodiles : Live" />So, Crocodiles came on the stage like it was their night, and weren't giving a stuff that they weren't headlining. ... 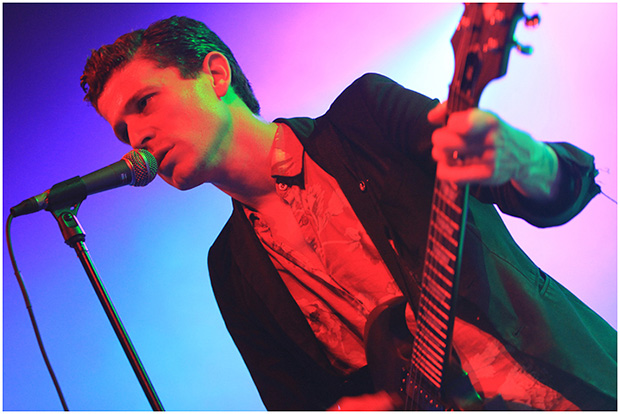 Click here for photos of Crocodiles at 2012 4Knots Festival in New York, NY in the QRO Concert Photo Gallery

Click here for photos of Crocodiles at SXSW 2012 in Austin, TX in the QRO Concert Photo Gallery

So, Crocodiles came on the stage (to Gary Glitter’s “Leader of the Gang”…) at Manchester’s O2 Academy on Saturday, May 12th, all five of them, like it was their night, and weren’t giving a stuff that they weren’t headlining.  The short-haired blonde drummer Alianna Kalaba had the rhythm in the pocket; along with the organ (covered in a California Republic flag) reminiscent of Clint Boon’s sound.  Hand in hand with front man Brandon Welchez’s enthusiastic performance “Mirrors” took us to where they intended.

The drone linking the songs was a lot like Spiritualized (QRO live review), but hey, no complaints from here!  Much better than a quiet, awkward pause.  Charles Rowell’s guitar playing was fantastic, as he played around with both sound and instrument, at one point taking a slug from a bottle of wine then running it up and down the neck…  pure magic – although unsure if spitting it out afterwards was such a good spectator sport!

Welchez’s grip on the mic exposed his bat tattoo.  Clenching every word out like in pain, he was caught in the moment and we were taken along with him.  The occasional smile to nodding bassist Marco Gonzalez brought Welchez and his Hawaiian shirt out of his music trance.  Gonzalez had one of those naughty smiles that looked he shouldn’t, like it was an outtake from a serious TV drama.

With his back to the audience, “I Wanna Kill” saw Welchez load a (pretend obviously) bullet in to his hand (mimed into a gun shape), turn and shoot randomly into the crowd.  Along with Rowell’s spraying of “bullets”, using his guitar they were happily engrossed in their playtime.

The Crocodiles, cool as a band to add to your collection.