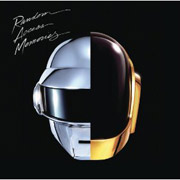 When most people think of Daft Punk they most likely don’t associate them with the words ‘disco funk odyssey,’ but a disco funk odyssey is exactly what their new album Random Access Memories is, and despite many mixed receptions with regard to their evolution of sound, it is quite the welcomed change.  Longtime fans of Daft Punk will be surprised to hear that this really isn’t an electronica album, but rather more of a dance/disco album with real instrumentation, which pays homage to that style of music from the ‘70s and ‘80s.

In a recent interview with Rolling Stone, one half of the French duo many refer to as “The Robots,” Thomas Bangalter, was quoted as saying, “Electronic music is in its comfort zone, and it’s not moving one inch.  That’s not what artists are supposed to do.”  That pretty much hits the nail on the head.  Sure, many times in the past bands have tried a new sound that has completely and totally failed and fallen on deaf ears, but there has got to be a certain amount of kudos issued to any artist willing to take on a new direction and not stay where they know they will be safe and make a buck.

In and of itself, this album is impressive enough, but when you look at some of the names attached to it, it gets even more impressive – names such as Pharrell Williams, Nile Rodgers, Giorgio Moroder, and Paul Williams, for instance.  There are so many layers to many of these songs that it’s almost overwhelming when you really think about it.  But the great thing – and where Random Access Memories really achieves success – is that it doesn’t feel overwhelming when you listen to it.  It sounds totally groovy and accessible.

The song “Giorgio By Moroder” is really interesting because it features spoken-word vocals by the great Giorgio Moroder over an escalating tapestry of instrumentation, which reaches its pinnacle around the 5:50 mark and then just rips from there on out (the entire track is over nine minutes long).  Famed session drummer John Robinson was the man behind the drum kit for this as well as many other songs on the album and it really showcases the true talent he possesses.

Another stellar track is the album’s closer, “Contact”.  It features an actual voice recording of Eugene Cernan.  The duo thought this would be a fitting way to end the album, as Cernan was the last man to leave the surface of the moon on the final Apollo mission, Apollo 17.  Musically, the track is an insane mixture of real instrumentation and samples.  It again features amazing drumming talent, this time by the great session musician Omar Hakim.

It’s fascinating that a group like Daft Punk can take eight years between studio albums and still remain as relevant and exciting as they ever were, if not more so.  Granted, they did the score for Tron: Legacy (QRO soundtrack review) a few years ago as well as released the amazing Alive 2007, but for many other bands throughout history, that’s enough time without any proper original material to lose steam and fade away.  Random Access Memories is not only proof that Daft Punk never went anywhere, but that they are capable of achieving heights that no one thought possible and that they are capable of topping themselves with quite possibly their greatest work to date.