<img src="http://www.qromag.com/wp-content/uploads/2009/01/davidbowieiselect.jpg" alt=" " />David Bowie's hand picks are out of the ordinary for an interesting collection of his work on <em>iSelect</em>. ... 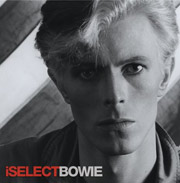 Few artists have managed to stay as relevant for as long as David Bowie – it’s coming up on forty years since he first broke through with 1969’s “Space Oddity” (the theme music to The BBC’s coverage of the Apollo moon landing).  He’s had his ups and downs, from his glam-rock pinnacle in the seventies to his ill-advised dance music and collaborations in the eighties, and The Thin White Duke hasn’t done a new record or tour since his 2003 heart attack on his Reality tour.  But he’s never left the limelight entirely, even accessing a new generation, appearing on stage with Arcade Fire (QRO live review) in 2005, contributing backing vocals to “Province” from TV On the Radio’s (QRO live review) Return to Cookie Mountain, and curating the first (and so far only) High Line Festival in New York in 2007 (QRO 2007 Festival Guide).  Now he’s compiled an interesting collection of personal favorites – eschewing the ‘greatest hits’ route – on iSelect.

That kind of ‘artist’s choice’ can be tricky, but the world already has a slew of Bowie greatest hits, and the musician certainly hits it out of the park with his leadoff choice, the one-and-only “Life On Mars?” (QRO’s Music of the Spheres).  If you need to be told how great this song is from 1971’s Hunky Dory, then you have to brush up on your Bowie.  “Mars?” has enjoyed a resurgence of late, being one of the songs Bowie played with Arcade Fire, then providing the title to the BBC ‘modern-day cop wakes up to find himself in 1973’ series, as well as the recent American version on ABC.  But even with that, it’s still not the first pick you’d think of from Bowie’s glam-rock heyday, as it came before the seminal The Rise and Fall of Ziggy Stardust and The Spiders From Mars, and always deserves another spin.

From there, Bowie draws mostly from the seventies, but no other singles from that era are chosen.  Instead, he picked some overlooked songs, like Hunky’s dense but strong “The Belway Brothers” and the unusual “Lady Grinning Soul” (from 1973’s Aladdin Sane), a sort of mixture of French New Wave and James Bond theme songs.  Some of these picks aren’t as worthy of a second look as those two – Young Americans’ grand-but-stripped “Win” is a little overwrought, while Lodger’s “Repetition”, told from the point of view of a wife-beater, tries a little too hard to make itself off-putting with its slurring bass.  But Bowie also picked Lodger’s “Fantastic Voyage”, which has improved with time (and its grand vocal build at the end pointed the way to his famed pair-up with Queen, “Under Pressure”), and Diamond Dogs’ glam-rock epic “Sweet Thing/Candidate/Sweet Thing (Reprise)”.

1979’s “Voyage” was first (and only) played on Bowie’s Reality tour, and his picks from the eighties and nineties seem to indicate Bowie trying to find some material from that era which deserves rehabilitation.  Most notable are “Loving the Alien” (performed stripped on the Reality tour) and “Time Will Crawl”, from what are regarded as Bowie’s two worst records, 1984’s Tonight and 1987’s Never Let Me Down.  Tonight was a quick, over-collaborated follow-up to the mainstream success of the previous year’s Let’s Dance; however second single “Loving the Alien” is the best track from that record, outside first single “Blue Jean” – not amazing, but would have been a solid middle piece on other Bowie records.  Bowie wisely remixed “Time Will Crawl”, getting away from the cheesy eighties sound of the original, and heading towards the more recent ‘neoclassical’ Bowie.

The only other even semi-original track on iSelect is “Some Are”, an outtake from the 1976 Low sessions that was included in the 1991 re-release of Low, but subsequently disappeared.  An ambient wave of electronica (albeit using seventies technology), it’s certainly an outtake, but remarkable.  iSelect finishes with a live recording of “Hang on to Yourself”, from the recently-released ‘official bootleg’ Live Santa Monica ’72; originally put out under Bowie’s pre-success pseudonym ‘Arnold Corns’ (Bowie was born ‘David Jones’, and had to use other names to avoid confusion with The Monkees’ Davy Jones), it was later re-recorded for Ziggy Stardust (misspelled “Hang Onto Yourself”), but the live version is an older one, more garage-rock than glam-rock, especially in the guitar solo.

Originally given away as a free gift with the June 29th edition of the British newspaper, The Mail On Sunday, interest was high enough that it has been subsequently released as its own record, including Bowie’s new commentary, like his remark that on the changing “Teenage Wildlife” (from 1980’s Scary Monsters (and Super Creeps)), he was trying to imitate the vocals of girl-group icon Ronnie Spector (QRO photos).  Does the world need another David Bowie collection?  Probably not.  But is this a more interesting collection of tracks than other Bowie compilations (or most greatest hits records)?  Certainly – but that’s Bowie for you…