<img src="https://www.qromag.com/wp-content/uploads/2009/12/deadtomeafricanelephants.jpg" alt=" " />Dead To Me neither slip back nor deliver on their promise. ... 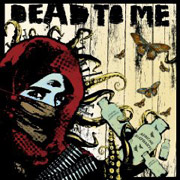 When San Francisco’s Dead To Me delivered last year’s Little Brother EP (QRO review), they seemed to be pointing a way forward for pop-punk for the Bay Area, which has been stuck in the shadow of Rancid & Green Day (QRO album review) for coming up on two decades.  But while their full-length African Elephants doesn’t slip back to the emo/punk-by-the-numbers of their debut, Cuban Ballerina, it also doesn’t deliver on Little Brother‘s promise.

The promise of the EP was confined to its first two tracks, "Don’t Wanna" and "Arrhythmic Palpitations", and African Elephants doesn’t have pieces that stand out as much as those two did.  However, the full-length is littered with likable pop-punk, from the ska-influenced "Modern Muse" to catchy garage-punk "Liebe Liese".  There’s also some workingman’s punk in "Cruel World" & "Tierra del Fuego", while the swinging & swaying "California" sun verges into calypso (and give Dead To Me credit for their geographical bent…).  None of these break any mold, and better versions of any one of these styles have been heard elsewhere, but so have many, many worse ones.

If even the building punk-plead "Three Chord Strut" doesn’t manage to breakthrough, one also doesn’t hold against Dead To Me that their Malcolm X recordings-peppered opener "X" doesn’t say anything, either.  We may still all have to keep looking for the next Operation Ivy, but African Elephants doesn’t fail any subjects, either.