The excitement grew and grew with the Brixton Academy filling up to capacity to witness The Bunnymen playing their first two albums 'Crocodiles' and 'Heaven Up Here' back to... 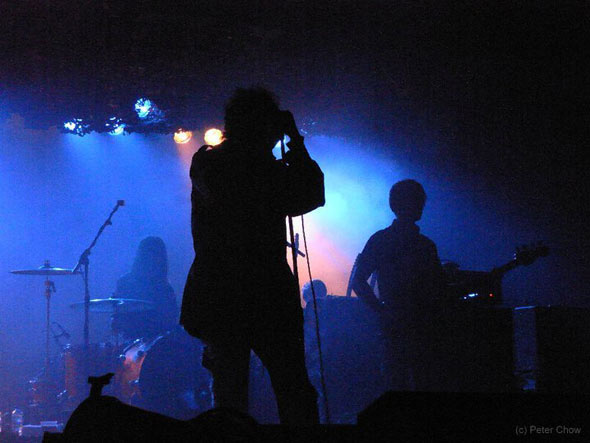 The excitement grew and grew with the Brixton Academy in London filling up to capacity to witness The Bunnymen playing their first two albums Crocodiles and Heaven Up Here back to back on Thursday, December 9th.  Just like that period of time back in 1981 the stage at The Brixton Academy was decked out with camouflage netting which frapped every part of the stage and partially covering most of the lighting.  The constant bellowing of dry ice engulfed not only the stage, but also the venue, adding the texture of gun smoke and cannon fire.  The battle lines were drawn for a show of strength and the audience of young and old (such is the massive influence of this bunch of scally’s from Liverpool), who were meeting at the barricades on the promise of a great show.  They were not to be disappointed as the Mersey men delivered a blistering 25 songs from the two albums and some of the best known songs from their impressive back catalogue.

To the familiar Georgian chants, on strolled Ian McCulloch and Will Sergeant, the original members of the band, with their four other members Gory Goudie on guitar, Stephen Brannan on bass guitar, Paul Flemming on keyboards and Nick Kilroe on drums.  All had donned military combat clothing with only McCulloch breaking the ranks with some ripped blue jeans and his compulsory shades. 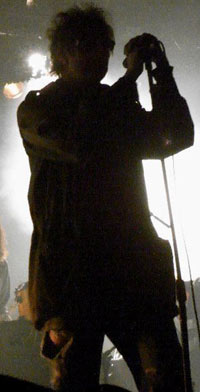 “Going Up” kicked things off with Kilroe building the song up around his powerful drumming with Mac reaching the climax of the song by singing, “Do you know what’s wrong with the world?”, which rang true for many with the scenes that had occurred in Westminster, London with students and police clashing.  Our TV screens had shown police on horseback charging into the crowd as the politicians made unpopular decisions on behalf of the nation.

“Stars are Stars” shone and “Pride” moved along nicely with the audience starting to position themselves, and Mac swigged on a glass of red ‘grog’ and encouraged the sound engineer to make some adjustments.  Things appeared to be really kicking in with “Monkeys”, with the audience starting to groove and singing along.  McCulloch declared how great it was to be back at the Brixton Academy again and the scene of their video shoot for their single “Seven Sea’s”.  Which, they wouldn’t be playing tonight responded McCulloch, to a round of boos from the crowd!  “Easy now,” was the light-hearted response from the frontman as he retained order.

Things took off from there with the arrival as “Crocodiles” at a blistering pace with even more dry ice bellowing out from behind drummer Kilroe.  The crowd surged uncontrollably as a large mosh ensued central to the snarling McCulloch with his full crop of spiked up hair, which made him a familiar pin-up on many a bedroom wall during the 80s.  “Work all day / Live on hate” chanted McCulloch following up with “The world’s a prettier place / When you’ve got something to take,” a song that was forged in the 80s during the riots of an unhappy Britain of high unemployment and an ethos of looking after number one and sod the rest.

Help was at hand as Sergeant beautifully played the familiar licks that led into The Bunnymen’s 1980 single “Rescue”, which brought a great reaction from the audience and with McCulloch professing to be singing the blues.  Next came  “Villiers Terrace”, giving an insight into life surrounding the young Liverpudlians life in the early 80s.  During the song it merged into the popular blues driven rift of The Doors’ “Roadhouse Blues” with Mac slumped over his mike stand crooning and the audience loved it. 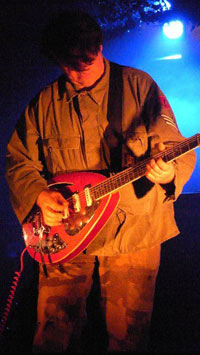 Another single from 1981 came with the steady “Pictures On My Wall”, with Sergeant strumming his way through, head slightly bowed and that flicked fringe hanging over his face.  Pandemonium came for “All That Jazz” as distorted guitars were cranked up and the rhythm section of drummer Nick Kilroe and bass player Stephen Brannan beat out a throbbing march towards the battle.  The band reached the final track “Happy Death Men” from the Crocodiles album, which has rarely been heard with all its quirkiness, reaching a crescendo of chaos.

Heaven Up Here is regarded by many as one of the most influential albums of the 1980s and was completed swiftly after The Bunnymen’s debut.  “Show of Strength” rose menacingly as McCulloch sang, “Hey I came here right on cue / One is me, and one is you,” as he drew his legions in towards him.  “With a Hip” was a wild hip-hopping mass of bodies with Sergeant screaming guitar and Mac declaring, “This is the one for the money / This is the ones for the trees / This is the ones for heaven / And this is the one for me,” again a reflection of British life in the 80s and a decade of greed, but was also a time where many did not have.

Highlight of this part of the show came in the shape of “Over the Wall”, which grew and grew until it lifted everyone up and swept them along, as McCulloch removed the monkey from his back and beckoned the audience to join him over the wall with wails of desperation and pleading to be held.  “It Was a Pleasure”, which Mac confessed to not being a fan of, was a song of complete irony.  Equally with “A Promise”, Mac asked for the audience and any eunuch’s to help him out with high parts.  Nevertheless, Mac was finding his range really well and his voice and enthusiasm making this a night to remember and another classic Bunnymen track executed clinically. 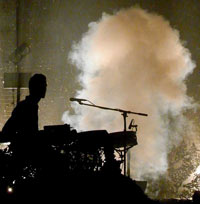 Next came a song that Mac acknowledged was probably at the time influenced by The Stooges, but with true Mac wit was followed up with… “Except this is better than The Stooges!”  “Heaven Up Here”, the title track from the album, is a mad song about drunken debauchery and stood out with Sergeants chopping guitar throughout.

Mac slowed things down with “The Disease” with the beautiful reflective lyrics, “If you get yours from Heaven / Don’t waste them”.  At a similar pace with the current Bunnymen drummer taking the limelight with tribal beats on him drums with “All My Colours”.  The set list ended with “No Dark Things”, “Turquoise Days”, and “All I Want”, with McCulloch pulling out a lyric sheet, as the band appeared to be in a rush to finish off and offer the tortured McCulloch the opportunity to get backstage and have a well-earned ciggie.

Clearly taking time to savour that ciggie, The Bunnymen took a while to return to stage for an encore, but when they did, they appeared refreshed and McCulloch in particular had returned with new vigour to declare that the next songs were his favourite bits of the night.  They began with the stunning single “Lips Like Sugar” from the 1987 self-titled album, the final one where the late Pete De Frietas appeared on drums, before this wonderful talent’s life was cut short at the age of 27 in a motorbike accident.

“Bring On The Dancing Horses” was next, again with Sergeant chiming guitar and a song that works so much better live rather than the overproduced studio version.  Next came “the greatest song ever written,” according McCulloch, and no one argued with him.  “Killing Moon” still sounds as great as it did when it was first released, and although The Bunnymen have probably played this song countless times, they played it with the same care and feeling they displayed when they were younger.

Proceedings ended with the second single from the Porcupine album.  “The Cutter” and its energising Eastern riffs and strings which swept everyone along into the finale with everyone dancing, moving, swaying or bouncing up and down as the dry ice continued to stream out across the audience.

The Bunnymen were back to form tonight and to signal the end of this special night loud bells chummed for several minutes as the packed venue spilled out into the cold London air. 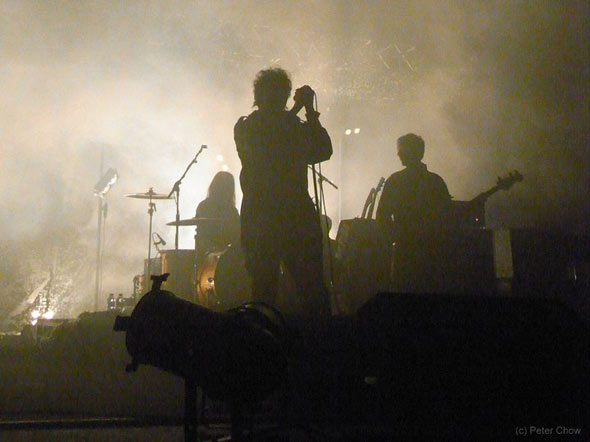