One couldn't help but be excited to hear that Echo & The Bunnymen were going to play classic 'Crocodiles' and 'Heaven Up Here'. ... 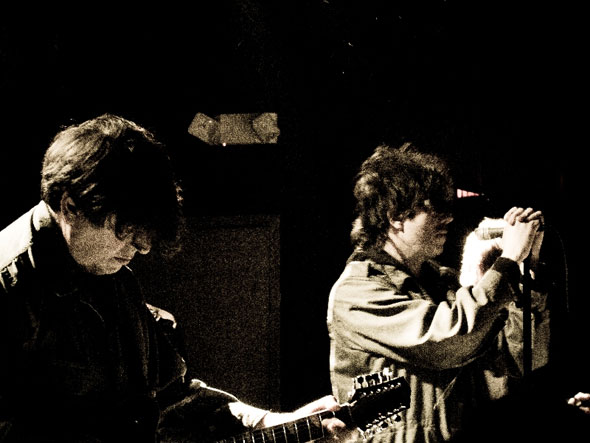 The year 1981 proved to be a pivotal and exciting one for the new wave of British and Irish rock bands.  Leading the charge were the likes of Siouxsie & The Banshees, The Cure, New Order, Simple Minds, U2 (QRO album review), and Echo & The Bunnymen.  With such accomplished albums as Crocodiles and Heaven Up Here under their belt so early on, history has cast very kind light on the musical maturity and promise that The Bunnymen once possessed.  As a staunch appreciator of these seminal albums, one couldn’t help but be excited to hear that they were going to tour them both, playing Boston’s Paradise on Monday, May 9th.

The ‘classic album concert tour concept’ is booming these days and longer lasting bands are reaping the rewards with full houses.  The curious case about Echo & The Bunnymen is that their illustrious career has been a game of two halves.  After their initial split and the death of drummer Pete De Freitas in 1989, the band dissolved for almost ten years before a somewhat successful return with the half-decent Evergreen.  Although reduced to a core of only two original members, singer Ian (Mac) McCulloch and guitarist Will Sergeant, they have toured and recorded regularly since then.

McCulloch has never been one to shy away from proclaiming his own greatness and has gained much notoriety in this respect through the years.  To some, this is amusing, but it becomes old.  Playing the same venue in 2006, a good show was somewhat marred by Mac’s insistence on abusing members of the audience with such delightful lines as, “You’re all a bunch of twats,” and, “There’s always a gaggle of tit-heads in Boston.”  Perhaps Mac not being allowed to smoke on stage made him want to take it out on the crowd for the night.  But hey, we can all have an off day, so was happy to give him the benefit of the doubt.

The show kicked off well with “Going Up” and “Stars Are Stars” as audience members were taken on a ride through their debut LP Crocodiles.  Early cries for “Do It Clean” (a U.K. single, later added to the U.S. release of the album) were playfully knocked back with an explanation, “We’re playing the proper English version but we’ll get to it later”.  This moment was an icebreaker and, as per his trademark style, Mac was content to ramble and mumble between most songs.  In the context of the album show this was quite a distraction from the mood of the original records.  It came to the point that he felt the need to make comments in the middle of songs, which sadly set the scene for how his night was heading.  Back to the music, the rumbling bass intro of Crocodiles was a highlight, as always, before being treated to favourites like “Rescue”, “Villiers Terrace” and “All That Jazz”.  End of disc one and all was well (musically speaking), as all continued on to the Heaven Up Here album.

In this scribe’s humble opinion, the militaristic menace of “Show of Strength”, the broody drama of “Over the Wall”, and the machine gun staccato guitar of Heaven Up Here really state the case for this album being their finest.  The current band – none of whom were introduced – created very authentic musical reproductions of the songs and Will Sergeant truly shone as the much-overlooked guitar great that he is.  Let’s not dwell on the fact that most of the night’s set was over 30 years old; this was a celebration of the musical legacy of one of Liverpool’s finest ever bands.

As the night wore on, Mac defiantly had the odd smoke when he could and that was his prerogative.  However, in the same fashion, the longer the gig went on, the shakier his vocal delivery became.  The Ian McCulloch of 2011 is a deeper and slightly raspier sounding version of the man who frequently proclaimed himself, “The best fucking singer in the world” over the years.  Not sure where ‘that’ guy went, but he wasn’t present on the Paradise stage.

With both albums completed, the band returned, encoring initially with the much-requested “Do It Clean” and an extended “Lips Like Sugar”, which got the room rocking.  “Bring On the Dancing Horses” came afterward, which, for long-time admirers of the band, could make a bit sad as Mac unsuccessfully attempted to sing parts of the song in the original higher key, before retreating to a defeated low mumble, having given it up as a bad idea.

The last song of the night was “Nothing Lasts Forever”, which summed up the present incarnation of The Bunnymen.  Upon segueing into a Doors song, McCulloch declared to the band, “Forget that, they don’t know it,” remarking on the audience’s lack of response.  Then, just one verse and chorus of Lou Reed’s “Walk On the Wild Side” later, the band was gone in a low key ending.  Despite the crowd’s continuous cheering, the planned final encore of “The Killing Moon” was aborted, thus rendering the cheering to a disappointed, moderate booing when the house lights came on.  Amazingly, one couldn’t help but feel that Mac had managed to spoil the overall vibe of the gig during the course of the encores.  What the audience saw was more akin to echoes of The Bunnymen than the real band whose reputation they are trading on.

We All Have Hooks For Hands : Girls EP