<img src="http://www.qromag.com/wp-content/uploads/2011/07/elbowbuildarocketboys.jpg" alt="Elbow : Build a Rocket Boys!" /><i>Build a Rocket Boys!</i><span style="font-style: normal"> hews more towards the stripped piano & vox, sometimes too much, but is a... 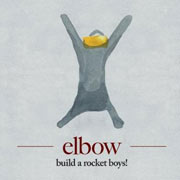 With their 2001 Mercury Prize-nominated debut Asleep In the Back, Manchester’s Elbow showed great promise and skill in their rather progressive alternative stylings, and truly lived up to that promise in 2008 with the Mercury Prize-winning The Seldom Seen Kid (QRO review), which ricocheted through styles without losing ability.  Follow-up Build a Rocket Boys! hews more towards the stripped piano & vox, sometimes too much, but is a successful successor.

While Seldom could induce sonic whiplash thanks to its changes in genre, Rocket primarily mixes intimacy and grandeur.  At its best, such as “With Love”, “Open Arms”, and closer “Dear Friends”, Elbow do both at the same time, and do it very well.  However, in general there is more stripped and intimate than big and stretching, including ominous processions “The Birds” and “Neat Little Rows”, or the interesting beat at the fore of “High Ideals”.  Rocket‘s only real problem is Elbow dipping into the stripped well too often – “Jesus Is a Rochdale Girl”, “The Night Will Always Win”, and “The River” would each work well if they were the only stripped songs on the album, but there is too much of this good thing on Rocket.

The Seldom Seen Kid was Elbow’s tour-de-force, will more skill and accomplishment than could be fit into one record.  Build a Rocket Boys! can’t match that success, as Elbow actually picked a style, as opposed to trying to succeed in all.  But other than that drop in over-ambition, Rocket reaches high.