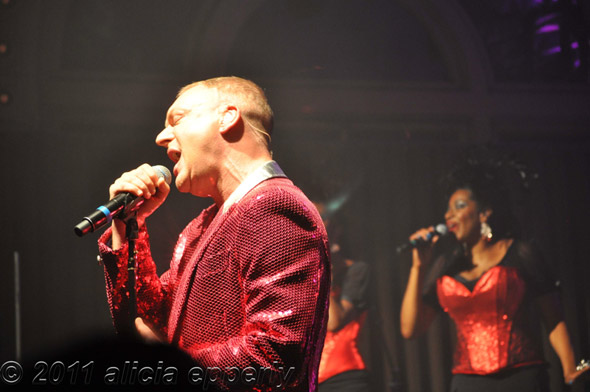 Erasure’s October 5th show in Portland, OR was the second-to-last show of their hugely popular Tomorrow’s World U.S. Tour.  Playing at the Crystal Ballroom, which has a ‘floating’ floor on ball bearings, the sold out event had the audience literally shaking.  Touring behind their first new album in four years, Tomorrow’s World, Andy Bell and Vince Clarke showcased five new songs and also played 17 more show stoppers.  Opening up with the subdued "Sono Luminus" fit perfectly with the gargoyle stage set-up.  Compared to their other extravagant stages from past shows, this seemed a bit minimal but it allowed more focus on Bell, Clarke and their two female background singers. 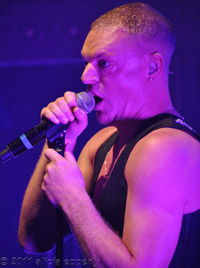 Known for their over-the-top performances, Erasure took a different approach tonight as they slowly built up momentum.  "Always" followed "Sono Luminus", and then they played their new single "When I Start To (Break It All Down)" (QRO mp3 review) which the audience quickly warmed up too.  By "Breath of Life", Bell and Clarke had the disco party in full swing.  Bell’s voice sounded amazing as always, though a bit deeper, which may be due to the many shows they’ve performed on this tour or to age.  Either way, it was still stunning.  The dramatic "Drama!" was punctuated by everyone shouting "guilty" at the top of their lungs, and by now the cool October evening felt like a hot summer night at a disco in Ibiza.  "Ship of Fools" really showcased the backup singers vocals perfectly, giving it a touch of a gospel feel that accompanied Bell well.  The duo reached back to 1987 for "Victim of Love", and then went into "Alien", which gave Clarke a chance to get out from behind the keys and play his acoustic guitar.

Erasure played two new songs back to back ("I Lose Myself" & "A Whole Lotta Love Run Riot"), 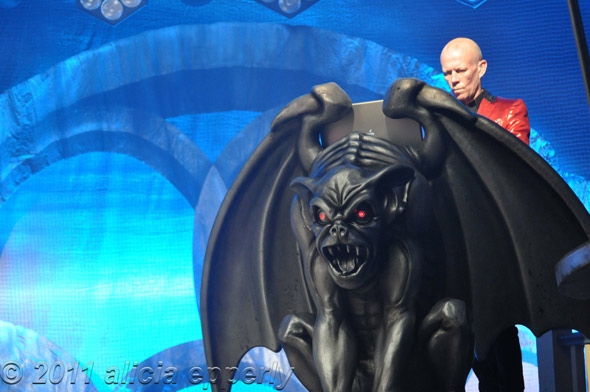 though most in the crowd were probably unfamiliar with them, they cheered appreciatively.  "I Lose Myself" is quite the Euro-disco stomper, which features Bell’s catty line, "I’m not concerned about the bitch I’ve been / They sure must have all deserved it."  The rest of the evening turned into another extended sing-along for the audience as the band broke out their biggest hits.  "Chains of Love", "Sometimes" and "A Little Respect" brought the house down while also bringing the night to its first conclusion in fine fashion.  For the encore, Erasure played their first global smash "Oh L’Amour", then wrapped up the night with, appropriately, "Stop!".  Of course, no one wanted this disco party to stop, but it had to at some point.  With nearly 40 charting singles over their 26-year career, there had to be a conclusion.  Bell and Clarke proved nothing has diminished over time and the new songs fit in perfectly with their older material.  In fact, it won’t be surprising if many of the faithful picked up Tomorrow’s World as soon as it was released on October 11th. 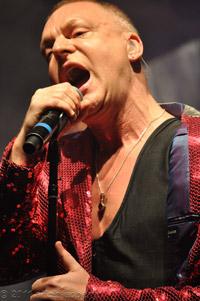 When I Start To (Break It All Down)
Blue Savannah
Fill Us With Fire
Breath of Life
Drama!
You’ve Got To Save Me Right Now
Ship of Fools
Chorus
Breathe
Victim of Love
Alien (acoustic)
Hideaway
Love To Hate You
I Lose Myself
A Whole Lotta Love Run Riot
Chains of Love
Sometimes
A Little Respect
Encore
Oh L’Amour
Stop!