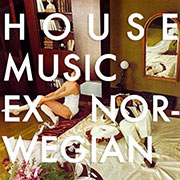 If pop music’s main function is to be accessible to as many people as possible, then there is a class in that school of thought that teaches "everyone hates everything sometimes."  After two full-length albums, several lineup changes, and a number of national tours, Floridian Roger Houdaille’s long running project Ex-Norwegian seems to want to let off some steam.  The new album House Music acts as Houdaille’s public list of grievances on the state of the country, popular music, and the world we live in.

As the third full length release from the band, House Music is a great example of where the band comes from without being made useless by the band’s former releases (Sketch and Standby).  The instrumentation is interesting without being distracting, reminiscent of the work The Attractions on Elvis Costello’s famous This Year’s Model.  In fact the whole album is ripe with Costello-like signatures, including distinct and danceable drum sections, hooky guitar lines, and lyrics full of venom.  The production remains high quality as per the band’s previous releases with heavy focus on the drums and guitar hooks.

Most of the songs on House Music work well for singles.  There is however, more of an effort put in for some more experimental and full circle tracks than what was seen on previous releases, including the closing jammed out number "Tong as in Pete".  Standout singles include the conflicted Floridian anthem "Join the Fray" and the sarcastic spite shot at pop culture "Original Copy".

If there is a down side to be found to the album, it may be that the tone comes off too defeatist and aggressive at times and may put off those who don’t share Roger Houdaille’s outlook on the world.  But as a document of his message and a display of the band’s talent it stands as Ex-Norwegian’s best work to date.  Anyone who digs on such artists as Elvis Costello, Joe Jackson, or Marshall Crenshaw would be well off checking it out along with the band’s previous releases.