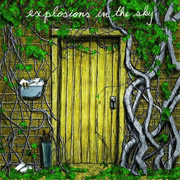 With their first album in four years, instrumental rock royalty, Explosions in the Sky, had their options wide open.  Since 2007’s ambient and drone focused All of a Sudden I Miss Everyone, the Midland, Texas quartet had only released a companion to All of a Sudden, comprised of remixes by artists suck as Four Tet, Jesu, and Eluvium.  The smart money may have been betting on the next Explosions record to split the difference, focusing the new sounds discovered on All of a Sudden into a package that speaks more directly to the blurring line between dance oriented rock and electronic dance music, fertile ground for a group so rhythmically nuanced.

Click here for photos of Explosions In the Sky at Orpheum Theatre in Boston, MA on October 5th, 2011 in the QRO Concert Photo Gallery

Click here for photos of Explosions In the Sky at Music Fest NW 2011 in Portland, OR in the QRO Concert Photo Gallery

Instead, the new Explosions in The Sky album, Take Care, Take Care, Take Care, sounds much like the early-mid aughts version of the group, particularly their 2003 breakout album, The Earth Is Not a Cold Dead Place.  In all likelihood a casual listener would not notice much of a difference if tracks from Take Care were mixed in with those of The Earth.  For the die-hard Explosions followers (can we call them ‘exploders’?) who have burned through the progressions and swells of the groups six previous albums (including their fantastic soundtrack to the 2004 film and subsequent series, Friday Night Lights), the latest offering will be welcomed as variations on a familiar riff, similar to a new Girl Talk (QRO photos) album, more of the same, but welcome all the same.

The three guitar, one drummer line-up is maintained throughout the album, meaning that, as usual the song’s dynamics occur at the level of through volume, distortion, and interlocking arpeggios, with little low-end frequencies to speak of.  The effect is a melodically pleasant, atmospherically meandering album that once again identifies itself as a more thoughtful Mogwai (QRO live review) or a less ambitious Godspeed You! Black Emperor.

“Trembling Hands”, by far the album’s shortest track by half at fewer than four minutes, is also the most memorable, not least because of the addition of panting vocalizations as a rhythmic element.  The rest of the songs are loud/quiet slow burners relying on the tension that comes with restraint and release.  It’s clear that the band has matured, but Take Care indicates that their confidence has made them more patient, not necessarily more interesting, with age.  The group tours the U.S. in September and October before an extensive European tour in November.