Feist mixed pure beauty with pure charm to win over a massive crowd in the second of two nights in New York. ...

Feist mixed pure beauty with pure charm to win over a massive crowd in the second of two nights in New York. The indie-songstress went from being the female vocalist in Toronto super-collective Broken Social Scene to even greater heights with her solo record, The Reminder – especially after Apple featured her winning single “1 2 3 4” in a ubiquitous iPod commercial.  This has led her to playing places like the cavernous, three-floor Hammerstein Ballroom (QRO venue review), with fans from Stephen Colbert to chattering teenyboppers.  That kind of crowd & space could really take away from Feist’s intimate sound, but she overcame it all on Wednesday, April 30th with an amazing stage show. 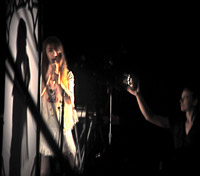 Feist opened in the most unique way possible, singing “Help is on its way” behind a silkscreen, with only her shadow visible, lit up behind her by a single lantern (see right).  While that set the stage for the kind of visual show she was going to deliver, it most certainly did not in terms of audience interaction.  Feist was nothing if not engaged with the crowd – no easy feat in such a large place – bantering about everything from New Kids On the Block (twice) to hi-definition TV (“The end of sexiness”).  She showed off her harmonica skills (really a work in progress…), promoted BSS founder/boyfriend Kevin Drew’s solo record, Spirit If… (

QRO Review) – she even thanked the crowd for smuggling in their own booze.

In fact, sometimes Feist went a little overboard with banter: before “So Sorry”, she endeavored to turn the crowd into a choir, by giving different harmonies to different first names.  At first, she just said, “A, B, C, D, E, F, G, H – go ‘Aah…’”.  But then she started listing a first name to go with each letter, like ‘Kyle’, ‘Leslie’ (her own first name), ‘Quincy’ (she had to think about that letter for a moment), ‘Simon’ (before adding ‘Stephen’, a shout-out to The Colbert Report host, who was in attendance), ‘Uma’ (“Is Uma Thurman here?”), ‘Verlyn’ (her mother’s name – and one even her mother didn’t like), etc.  She joked about people with names that start with letters near the end of the alphabet, saying, “Always picked last for the team – always picked last in life…”  She told people that if they missed any of what she said, they could watch it tomorrow on YouTube, even pointing out the young woman who was recording the whole thing (link).  She then admitted it had gone on too long, and told everyone to, “totally erase the last four minutes of your life by singing to the hymns.” 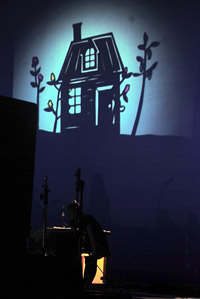 Feist’s mega-popularity did invite a somewhat less-than-awesome crowd – some girls left early, some ‘VIP’s’ seemed to only pop in every now and then, and there was at least one boyfriend there who was listening to his own music on headphones.  But the audience didn’t have the high chatter decibel of the night before, something opener Hayden (QRO photos) sheepishly begged them to keep down at the beginning of his solo set, and congratulated them for doing so at the end.  Yes, people were sitting in the two balconies at Hammerstein, but the stage floor/pit was full of dedicated fans.  And Feist took advantage of the high-roofed stage to bring out a shadow puppet show most unlike anything else you’re gonna see there or anywhere (see right).

Feist made an interesting, seemingly counter-intuitive, but actual shrewd move, by opening up her set with a number of lower-key pieces, like “When I Was a Young Girl” (from 2004’s Let It Die), “The Park”, and “The Limit To Your Love” – even first Reminder single “My Moon My Man” was more subdued.  While this meant that her set didn’t exactly start off on fire, it allowed Feist to get to know her audience, to connect far more deeply than had she thrown down “1 2 3 4” early on.  And when she did light it up with The Reminder’s single after “1 2 3 4”, “I Feel It All”, the crowd went extra-wild.

Following a wonderful version of the haunting, almost indietronic “Honey Honey”, Feist hit back-to-back covers.  She started with Kevin Drew’s “F—Ked Up Kid” (one of her “twelve favorite songs on” Spirit If…), telling the crowd that his solo album “is a record not enough of you heard.”  She then launched into “Open Window” by Canadian singer/songwriter/activist Sarah Harmer.  In some ways, it was a challenge to the audience, but one that they were up to.

And Feist rewarded everyone with not just “1 2 3 4”, but followed that up with The Reminder’s second-most rockin’ track, “Past In Present” and Let It Die’s opener “Gatekeeper”.  She proceeded to go into the encore break on a high note, with the amazing Reminder triptych of the drunk-wise “Brand Alexander”, oh-so-cute “So Sorry” & choir/name babble, and latest single, “Sealion”.  That reinterpretation of Nina Simone’s own version of the traditional southern blues ballad brought Hammerstein a-rockin’.  Feist was somewhat subdued in her encore return, with more low-key numbers like “The Water” and “Let It Die”, but the crowd was won over by that point.

Set to return to the Big Apple in July at the Prospect Park Bandshell (QRO venue review) in Brooklyn (QRO calendar listing), a benefit show for the Celebrate Brooklyn series of concerts (QRO Festival Guide), Feist is able to fill any space with her music, no matter how indie or intimate she might sound.  The crowds might have a higher percentage of non-hipsters than one might like, but that just sets her apart from all the other alternative shows in New York.  You go for Feist, and you get a whole heapin’ helpin’ of her.