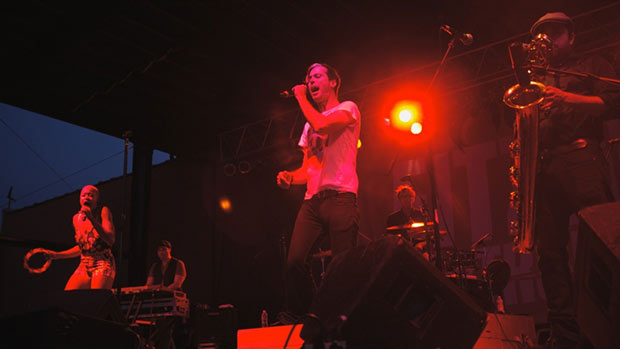 Click here for photos of Fitz & The Tantrums from Forest Hills Stadium in Queens, NY on June 23rd, 2019 in the QRO Concert Photo Gallery

Click here for photos of Fitz & The Tantrums at 2014 Austin City Limits Music Festival in Austin, TX in the QRO Concert Photo Gallery

Click here for photos of Fitz & The Tantrums at 2014 Lollapalooza in Chicago, IL in the QRO Concert Photo Gallery

Click here for photos of Fitz & The Tantrums at 2012 Wakarusa Festival in Ozark, AK in the QRO Concert Photo Gallery

Click here for photos of Fitz & The Tantrums at Bluebird in Bloomington, IN on March 6th, 2012 in the QRO Concert Photo Gallery

Kansas City doesn’t really have a reputation for high temperatures, but anyone who’s spent a few days there in June or July can attest to the unbearable heat that smothers the heartland during the summer months.  It can get downright disgusting, just sloppy hot, temperatures upwards of 100 degrees, making outside nearly unbearable.  When Fitz & The Tantrums took the stage and The Crossroads on Thursday, July 5th, the sun had retreated beneath the KC skyline, and the heat was beginning to wane, but it still caught Noel Scaggs off guard: “They told me it was gonna be hot, but Damn, this is HOT.”

The Crossroads is a delightful venue.  Open air and connected to a delicious pizza joint by the name of Grinders, there’s plenty of space to spread out and lawn chairs are not only allowed, but even encouraged.  It’s the perfect venue if you want the feel of an outdoor festival without having to sit through a whole day of smelly hippies and crappy midday bands. 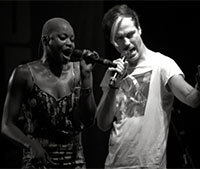 On Thursday night, there were indeed no crappy midday bands, just an opener that provided the classic definition of mediocrity.  I’ve already forgotten any distinguishing features of Royal Teeth, excluding that they’d do well to drop the male lead singer and let their redheaded vocalist run the show.  There were no smelly hippies; the crowd was a strange concoction of teenagers wrapped in shorts and Ray-Bans and gray haired couples staking out prime real estate with camp chairs and picnic blankets. 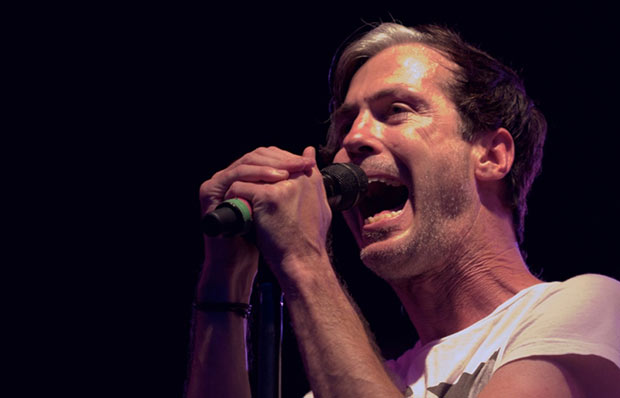 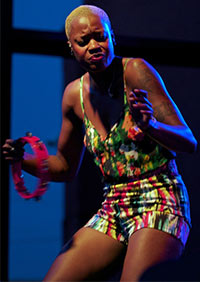 Fitz & The Tantrums really do put on a wonderful show.  Their brand of funk-laden, groove-heavy indie/soul lends itself extremely well to a live setting, invoking irresistible fits of dancing, and pure elation from the crowd.  It doesn’t hurt that the band is full of clearly talented musicians.  James King played the Sax like he was born to do it.  The bari sax sounded absolutely massive throughout the hour and 45 minute set, and he shows real agility when bouncing through his other saxophones and even playing a mean flute on “Pickin’ Up The Pieces”.

The chemistry that Scaggs and Michael ‘Fitz’ Fitzpatrick share was by far the most captivating thing about the show.  The two have an almost theatrical back and forth throughout the show.  Whether the sexual tension on display is just an act, or an actual driving force behind the music matters not.  What matters is how absurdly entertaining it is to watch the two dance, grind, and make eyes from across the stage.  It’s spellbinding, alluring, and gives a genuine quality to the show. 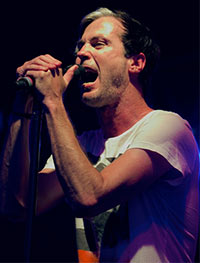 Scaggs could probably power a small city on the energy she puts out every show.  I’ve never seen a better wielder of the tambourine, and the sheer volume of dancing and movement she makes made me sweat buckets, or maybe that was just the heat.

If Fitz & The Tantrums are coming through your city, do not miss out.  It’s a show for all ages, and really all tastes.  If you enjoy enjoyment, there’s an endless supply of it during a Fitz set.  Don’t be discouraged by the heat – get out there and dance! 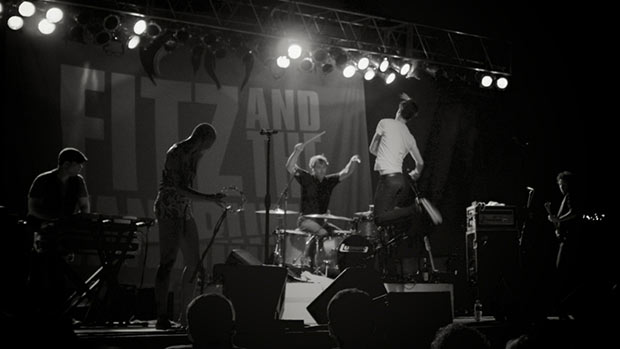