The beard-friendly band return with their second album, which strums down the same folky and melody-decorated path as their good (but slightly overrated) debut self-titled debut. ... 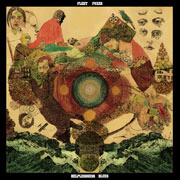 Seattle had previously been famous for Kurt Cobain (not forgetting the entire grunge genre), rain, and Dr Frasier Crane.  However, since 2008, the Washington state has become known to some as also being the hometown of a critically acclaimed indie-folk band called the Fleet Foxes, which if you believe the reviews (and hype), seems to be knocking out output that is head and shoulders above their nearest competitors… potentially like a new metaphorical version of the Space Needle!

The beard-friendly band return with their second album here, Helplessness Blues, which strums down the same folky and melody-decorated path as their good (but slightly overrated) debut self-titled debut (QRO review).  The sound remains the same – with comparisons to their British equivalents Mumford and Sons (QRO live review) and Laura Marling (QRO live review) can be made instantly, as well as the classic American tunesmiths like The Byrds, Bobby Dylan, Simon & Garfunkel, the Beach Boys, The Flying Burrito Brothers, and Crosby, Stills & Nash.

Click here for photos of Fleet Foxes at Crystal Ballroom in Portland, OR on May 18th, 2017 in the QRO Concert Photo Gallery

Click here for photos of Fleet Foxes at 2011 Primavera Sound Festival in Barcelona, Spain in the QRO Concert Photo Gallery

Click here for photos of Fleet Foxes at Bowery Ballroom in New York, NY on March 28th, 2008 in the QRO Photo Gallery

The album begins with the soothing “Montezuma” – a song that begins the album in a way that is unmistakeably Fleet Foxes… and the band rarely veers away from this slightly frustrating template.  Warning, if you don’t allow the harmonies to flow all over you, then you are in big trouble.  Similarly, if you suffer from a shot attention span – this album really isn’t for you.  However, for those of you with patience, the album is a mini treasure trove of occasional moments of whimsical 1960s ear candy.  Title track “Helpfulness Blues” is the highlight that is epically simple and you’ll believe Robin Pecknold when he sings, “I was raised up believing that I was somehow unique” – despite the irony of thinking that they sound exactly like Paul Simon, back in the days when he was soundtracking Dustin Hoffman being seduced by a MILF.

Contender for best album of 2011?  Folk off!  Sadly, the album isn’t worth the hype.  It is just far too predictable.  The odd moments of raw vocals and sax bits provide a bit of variety on “The Shrine/An Argument”.  Phew!  But moments like this are an unfortunate rarity.  Don‘t get me wrong though, it‘s a beautiful album, and would be a fool to suggest that it isn’t a pleasant listen – it is – but one suspects that it will only really fully satisfy those of you who are teetotal and enjoy wearing cardigans bought by their mothers.

Andy Parker is the editor of the music news and album reviews website Electric Banana.

The Raveonettes : Raven In the Grave