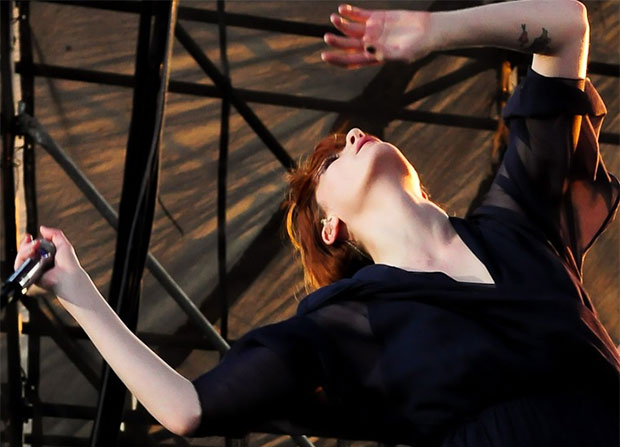 Florence & The Machine came to the amphitheater at White River State Park in Indianapolis on Sunday, July 29th, only two weeks after the final date that they cancelled due to a vocal injury sustained by Florence Welch.  Even though she had a few shows under her belt since coming back from the injury, there was naturally still some concern over her health and how she would sound.  Fortunately for Welch, she was in friendly confines.  The British band played a Fourth of July show at this same American heartland venue just last year, and clearly much of the crowd remembered her performance.

Walking out barefoot in a flowing black dress, she took her spot in front of the mic in a demure manner.  They opened with “Only If For a Night”, the powerful album-opener from the recent Ceremonials (QRO review).  If she was holding her voice back because of her injury, no one could tell.  Sticking close to the mic and offering only small, calculated gestures, she let her voice move for her.  Pushed even farther in front of the mix than on record, Welch’s voice felt as if it were somehow 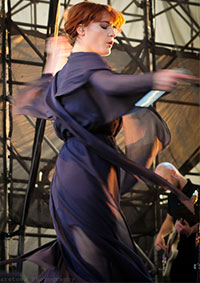 filling an open-air venue.  She became more mobile during the next song, “What the Water Gave Me”, also from Ceremonials.  It mostly came in the form of some spinning and leaping 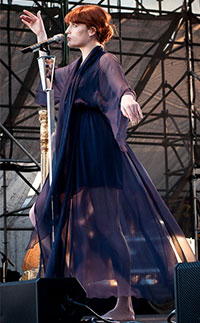 during the climax that seemed a bit forced, but kudos to her for having the stage sense at such a young age to play to the back row.  Despite her early reserved behavior, the fans were barely maintaining their composure, with the first few dozen rows enthralled with every aspect of the performance.

As she warmed up, Welch seemed to be having fun and her theatrics appeared more spontaneous as she worked through “Between Two Lungs”, “Cosmic Love”, and “Rabbit Heart (Raise It Up)”, all from the debut album Lungs.  As the last song of this bunch climaxed, she hopped down and ran a lap through the crowd with two security guards in tow, furiously trying to keep pace.  Next was “Spectrum”, the first #1 single for the band in their native U.K.  It is actually still atop the charts there, where it has been for the last four weeks. 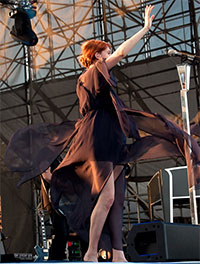 This is where she and the rest of the band fully loosened up, often engaging the crowd directly for the rest of the show.  Welch acknowledged a fan in the center of the third row that was beside herself with joy and holding up an American flag with flowers sewn into it, along with the words “Team Machine Eternal”.  When it was offered to her, she graciously took the flag and adorned Isabella Summers’ keyboard with it, announcing that this was “the part of the show where we decorate the stage…”

Next came “Heartlines” and Ceremonials-closer “Leave My Body”.  Welch ended the set with the haunting “Seven Devils”, and the hits “Shake It Out” and “Dog Days Are Over”.  For an encore, she did a longer and gentler version of “Never Let Me Go”, consisting of only piano and vocals from Welch, two backup singers, and drummer Chris Hayden for almost five minutes before finding a smooth, 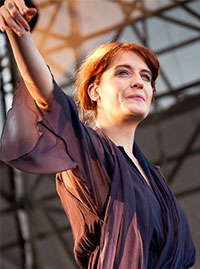 full-band stride towards the end.  It worked well to bring things down after all the bombast of most of the night’s songs.  This also set up a nice transition into the slow-starting “No Light, No Light”, which built up so the band could go out kicking.  This is music built for big venues, bright lights, and screaming fans to sing along to while having near-religious experiences.  The band clearly understands this; the instrumentation coming in wall-of-sound form, with Welch’s huge voice front and center. 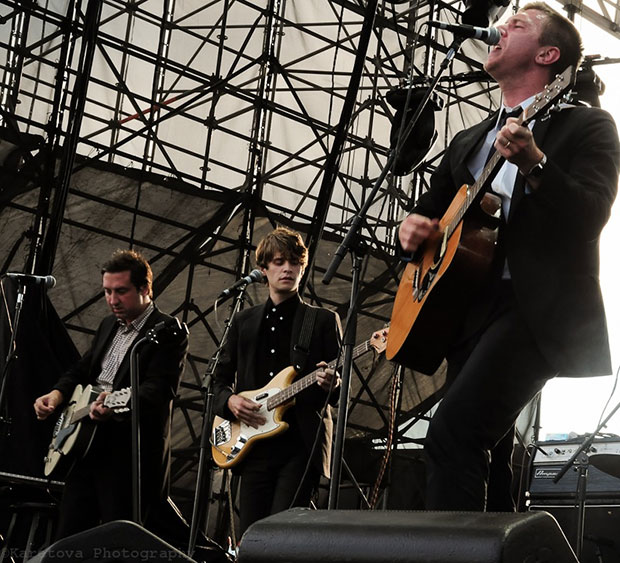 Opening was The Walkmen, who were a fitting choice despite their music having a lazy, off the cuff vibe to it, in contrast to the headliner.  They were touring in support of their new album, Heaven (QRO review), which features contributions from Fleet Foxes’ Robin Pecknold and Morgan Henderson.  The show started off with the pleasant surprise that Fleet 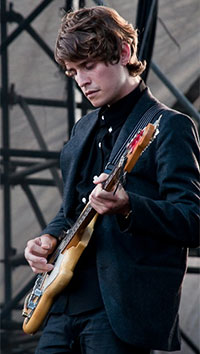 Foxes’ guitarist Skyler Skjelset would be playing bass, filling in for Walter Martin, whose wife had recently given birth.

All members of The Walkmen are accomplished musicians, but their playing has always been purposefully loose, even on record.  Their new album Heaven was noticeably tighter and cleaner than previous efforts without losing any of that charm.  This manifested itself in their live show.  The band had even dressed up, most noticeably singer Hamilton Leithauser in full suit and tie.  His distinct vocal style was always interesting, but not necessarily impressive on record.  A live performance shows that, unlike many rock singers, he is not the frontman just because he wrote the songs, or because ragged vocals work in rock music, but because he is a bona fide professional singer.  They sounded best when featuring their early, ragged experimentalism and when they played it relatively straight, backing Hamilton as he showed off his full range.  Unfortunately, only one song even came close to qualifying as the former category because all but one song came from the last three of their seven albums.  That song, “All Hands and the Cook” from 2006’s A Hundred Miles Off closed their set and was the clear highlight.  It tied their set to Florence & The Machine’s, shimmering along but occasionally reaching soaring heights.  These bands are doing a couple more shows together before going their separate ways and each playing festivals for most of the rest of August.