'We'll never get a Nirvana reunion,' the thinking goes, 'But this is as close as we'll get.' However, 'Wasting Light' is just another Foo Fighters record.... 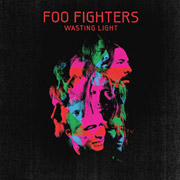 To a certain group of people, Dave Grohl’s Foo Fighters will always be ‘the band fronted by the drummer from Nirvana.’  Nevermind that Foo Fighters have lasted longer, released more music, sold more records, played more shows, etc. – Kurt Cobain & Nirvana will be forever preserved in rose-colored amber (QRO DVD review), even going on two decades later.  That same group of people will tell you that this is all because Foo Fighters have never been nearly as good as the seminal grunge band that broke alternative music into the wider world.  But those folks’ hopes were still raised when Grohl recruited Nevermind producer Butch Vig (also was the drummer in Garbage) for the Fighters’ latest, Wasting Light, as well as recruiting Nirvana bassist Kris Novoselic to guest-spot on a song (as well as eighties punk icon Bob Mould – QRO live review – to guest-spot on another), and bringing back Nirvana touring guitarist/ex-Foo Fighter Pat Smears (who also fronted the iconic seventies punk act, The Germs).  ‘We’ll never get a Nirvana reunion,’ the thinking goes, ‘But this is as close as we’ll get.’  However, Wasting Light is just another Foo Fighters record.

Not that that’s such a bad thing – or a great thing.  Foo Fighters have been a consistent, mainstream rock band, hard, but never too hard, like a Pearl Jam (QRO Retrospective) without the early grunge days (understandably).  But Pearl Jam has had a resurgence/comeback in recent years (QRO live review), regaining respect among those ‘elites’ who stopped liking them after grunge burned out oh so many years ago.  Perhaps Wasting Light could have been the Foo Fighters record to regain that alt-attention, or perhaps the ‘reunion’ expectations would have crushed anything that the band & friends put out.  Whatever the case, what it is is another consistent, mostly decent, but never amazing, and sometimes weak album by a mostly decent, but never amazing, and sometimes weak band.

From opener “Bridge Burning” to closer “Walk”, Wasting Light is mostly a collection of middling-to-above-average rock songs, a bit melodic, and bit hard, and fairly forgettable.  There are a few relative standouts among these, such as the more meaningful “Dear Rosemary” (with guest guitar & back-up vocals from Mould), more evocative “Arlandria”, and catchier “Back & Forth”.  But there’s also the pointless “Miss the Misery” and too-teen heartbreak “These Days”.

What’s more, the exceptions to the rule are weaker.  A ridiculous guitar solo near the end mars “Rope”, while “White Limo” is a ridiculous speed-hard piece with distorted vocals – Foo Fighters are not this heavy of a band, and it sounds out of place when they try to be.  And “I Should Have Known”, which features Novoselic on bass and accordion, is a sadder, slower song that is about as overwrought as the title suggests.

Expectations were going to be too high for this semi-reunion, even tempered with such facts as Novoselic only on one song, that this is still a Foo Fighters record, and Cobain is still dead.  If you’re a Foo Fighters fan, you’ll probably like this record (in spite of all the commentary about it being nostalgia from old fogeys).  If you only were interested because of the Nirvana connection, you’ll go back to thinking what you’d previously thought about that band fronted by the drummer.

Arches – “This Isn’t a Good Night For Walking”