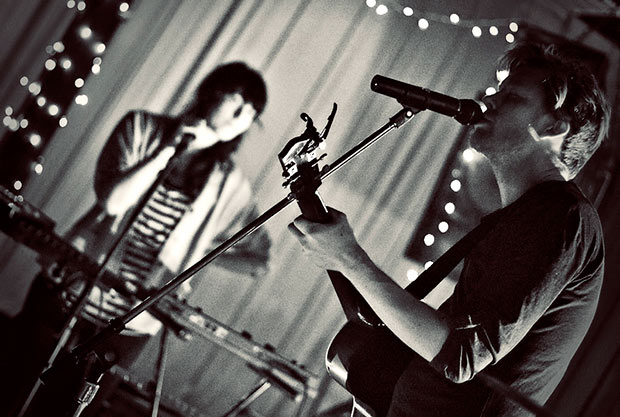 Click here for photos of Fredrik the night before at Hemlock Tavern in San Francisco, CA in the QRO Concert Photo Gallery

Click here for photos of Fredrik at Debaser in Malmö, Sweden on March 25th, 2011 in the QRO Concert Photo Gallery

Click here for QRO’s review of Fredrik at Piano’s in New York, NY on February 15th, 2010

On Haight St., the independent spirit continues to thrive since its heydays of San Francisco’s hippie movement in the 1960s.  After three decades, The Red Vic Movie House closed its doors to the public in July 2011.  But before the iconic theater would transform into a market place this year, it opened its doors on February 17th for a private event (private due to city codes) for Fredrik’s final U.S. stop.  The Swedes’ ephemeral tour all took place in the Golden State, lasting barely a week, split between Los Angeles and the Bay area.  This just may be the very last time The Red Vic House will host any event and who knows if Fredrik will ever have the chance to return to San Francisco.  How fitting that the two independent entities would come together to bid farewell…

Traveling light, Fredrik didn’t have the luxury of playing against projected imagery nor tote around instruments like cello or alto horn that attributed to their unique live experience.  Lead vocalist Fredrik Hultin relied only on a vintage Swedish acoustic guitar (Levin).  Ola Lindefelt’s customized percussion kit consisted of tubular bells, a cymbal, and a floor tom, which he often liked to strike with a pair of maracas.  Anna Moberg hovered between auto harp and keyboard.  While their instrumentation may have been lightened, an intricate interplay of howling and windy vocals by all three members filled the chasms and permeated the theater.  Let’s not 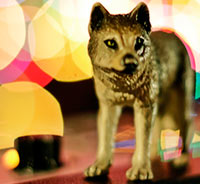 forget a vital member of Fredrik – Ylva (she-wolf), a plastic figurine that accompanies the band wherever they go and perches on Moberg’s keyboard during their shows, providing intangible dimension to their performance.

Fredrik playing "Naruto and the End of the Broken Ear" & "Vattenfront" live at The Red Vic Movie House in San Francisco, CA on February 17th, 2012: 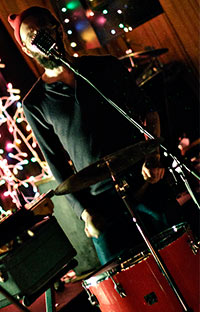 Against the net of glowing Christmas lights in a room of red carpets, couches, and curtains, the lanky trio treated the audience to a soundscape of nocturnal otherworldliness.  Lindefelt’s lute cut into the atmosphere, joined in by Hultin’s guitar and Moberg’s auto harp to start off the show with the sublime "Naruto and the End of the Broken Ear" and transitioning into the ominous "Vattenfront".  Though there were breaks between the other songs, it could have been one seamless performance where the texture and tone took precedence over impact.  The concertgoer dissolved into Fredrik’s expansive world of experimental folk, where time and space became irrelevant. 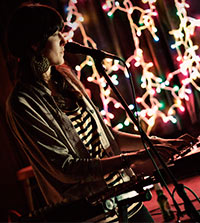 Fredrik’s set lasted about 40 minutes with six out of eight songs from their third LP, Flora (QRO review), released last year, and two tracks from their second album, Trilogi (QRO review).  While the Malmö musicians were modest, their performance was definitely worth more than a free private BYOB event.  Hopefully the attendees have discovered a little known treasure from the other side of the planet.  And if we’re lucky, Fredrik will return to this corner of the world. 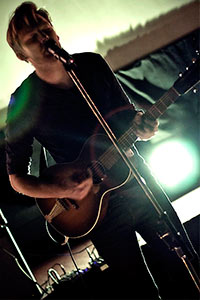 Fredrik playing "Inventress of Ill (and Everything)" live at The Red Vic Movie House in San Francisco, CA on February 17th, 2012: