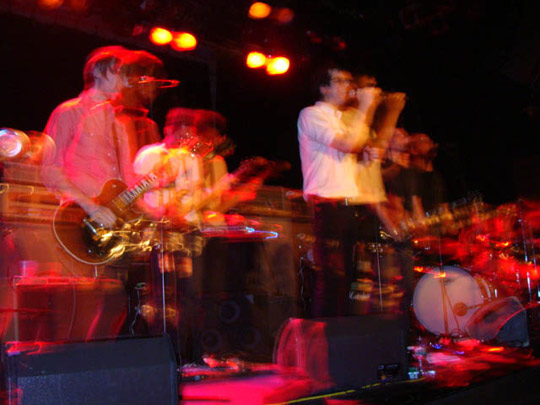 Click here for QRO’s review of Freshkills at Public Assembly in Brooklyn, NY on January 23rd, 2009

There is something so immediate about a Freshkills (http://www.myspace.com/freshkills) show – something in the involvement of the band in the music, in the quivering voice and sometimes-pained expression on the face of the frontman.  The lyrics, which sometimes aren’t completely intelligible, are absolutely worth a second look.  Lead singer Zachary Lipez is an adept storyteller – his words are abstract and poetic, gritty and visual, carrying hints of the sacred in tales of the profane – and they are made all the more real when delivered through five moving, breathing bodies right in front of you on stage. 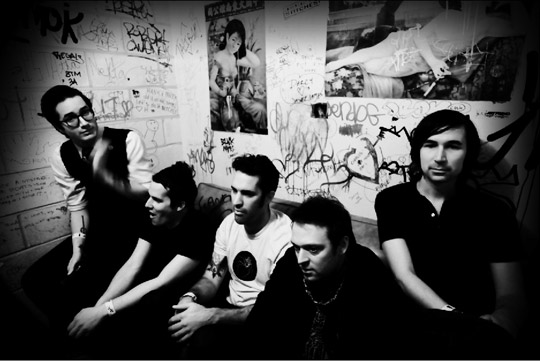 These five individuals with warring influences are what make this Brooklyn band (comprised of the aforementioned Lipez on vocals, guitarists Johnny Rauberts and Timothy Murray, bassist Mishka Shubaly and drummer Jim Paradise), so instantly recognizable, even despite being a band of few words, as they were at Music Hall of Williamsburg (QRO venue review), opening for …And You Will Know Us by the Trail of Dead (QRO live review) on Saturday, October 19th.  Their punk rock-styled pummel and unflagging drive is perfectly coupled with Lipez’s full, distinct pipes, and even more with his nervous energy onstage.  Of course, it’s not that he’s actually nervous – instead that his energy truly inhabits the songs, as if he’s living his reasons for writing them all over again.  The energy is present from the start, creeping just beneath the surface.  The band is clustered together in front of a wall of amps and equipment, unable to utilize the full expanse of the stage.  Noise from the double guitars reverberates, seeming like the average soundcheck, but then without warning, and without any grandiose introduction, the sound transforms into the opener, "Asleep Means No", the first in a set made almost entirely of cuts from their latest self-titled release (QRO review).

Lipez begins – hand on cheek, fists clenched, and looking as though he’s actually going through something onstage.  Steady drums introduce the track, and at once the tempo is high and the story is told – all the while showcasing their honest lyrics, driving rhythms, and abrupt tempo changes.  Lipez is steadfast at the front, and by the second song, "Enemies", their signature frenetic energy is breaking through – his skin is crawling, the drums launch to the forefront at the pounding chorus and breakdown, and the band is really beginning to come alive.  It doesn’t take long to realize that Freshkills has a serious knack for memorable, anthemistic, shout-it-out choruses, and "Enemies" is no different.  And in a way, a line from "Enemies" can describe the feeling of watching Freshkills, desperate and devoted, offering up their sonic punch under red lights and dark shadows – "I can feel / Something enormous rushing towards us".

The second song ends abruptly, making space for the few words Freshkills does say that night.  "We’re Freshkills, from down the street," Lipez says with a nonchalant but semi-comic air, gesturing to the streets outside with his water bottle.  Then before you know it, the music rushes in again – "My House" begins, and Lipez is belting the lyrics with palpable desperation, backed up on the chorus with steady vocals from the guitarists, every member fully involved in their respective instruments – some not even eyeing the audience at all.  Yet not a moment of it is passé, not a moment lacks authenticity.  It only becomes more apparent during their next song, "Child We Almost Had", a new cut saved for the recording of their forthcoming album, which fits right in with their dark and emotional yet direct and hard-hitting repertoire.  The drums are building, Lipez is literally hanging off the mic stand, repeating, "Not tonight, not tonight," bassist Shubaly has his back turned, playing to his amp, and it becomes undeniably clear that Freshkills have this ‘desperate energy’ thing down to a science.  It’s what makes a nearly wordless show still so unbelievably engaging.

The next song in Freshkills’ set stands out completely.  "The Bigger Man", another new track that has yet to be recorded, saunters in with distinct, creeping riffs of bass and guitar, and as the band plays on, especially furiously for the breakdowns, it seems Freshkills is flirting with a sort of harder, rocky bluesiness that unexpectedly suits them very well.  Then the formless, rising noise of the guitars is back – building ever so slowly before suddenly bursting into a track which brings the band back to material from their last album: "I Quit Smoking".

The song is stylish yet touching, emotional yet indifferent – a completely honest portrait of the complicated kind of hope we somehow cling to in the face of trysts that just can’t seem to work out.  "I said I… I want to be happy for you / And I…  Want to be less helpless all the time / And I… Don’t want to be someone you got over / And I… Just want to be around when you come alive."  As the chorus chugs and Lipez is standing at the mic, staring out, repeating "When you come alive, when you come alive," you get a glimpse of that joy he’s chasing, and it couldn’t seem any more true.  Yet without getting too deep into what could resemble Freshkills ‘ballad territory’, their nervous energy returns with an immediate explosion into the unmistakable "Caroline", a little firecracker of a song just under three minutes – constantly moving, pounding, driving – the clincher of their formula for a singable, repetitive chorus.

And then, without missing a beat or offering much more than "Freshkills, this is the last song," the band has suddenly reached their finale: an unforgettable rendition of "Revelations".  They’ve chosen the ideal song to close their set with – a dramatic, powerful pinnacle that leaves a lasting impression – and they ride it out to the very last note, seeming again like that ‘something enormous’, like something to behold.  "Now bow your head, know that evil is real/ Now bow your head, know that evil is real / You’ve got to believe / You’ve got to believe," Lipez shouts, nearly chanting to the frantic tempo, and this is only the start of the ascension.

The band is moving as much as they can amongst the restrictive crowd of amps, and absolutely punch it for the chorus – everyone is wholly absorbed, bobbing heads, singing along: "If you think the heart that beats / Beats for you and yours alone / Revelations, revelations / Revelations, revelations…"  It’s simultaneously spiritual and sinister, seeming like a beckoning, an otherworldly invocation, and the spectator can’t help but be honestly struck as the lights are blaring, the band is shouting, the feeling is fervent, the sound is skyrocketing upwards, and then suddenly – "Freshkills, thank you" – they’re gone.  Who needs lengthy between-song banter when you can run the gamut of emotions in a tight, explosive set, even as openers?  Let the music do the talking and Brooklyn’s Freshkills will be the real statement-makers. 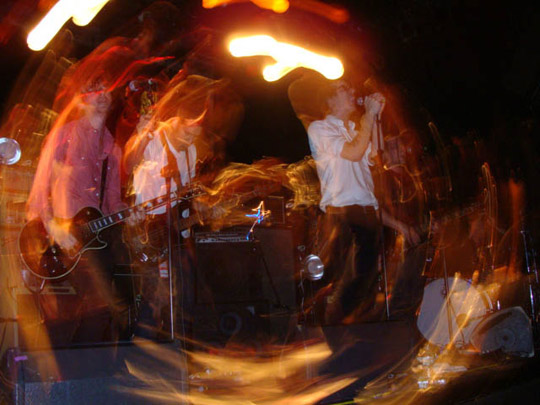 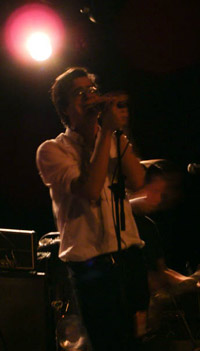 Freshkills is playing October 30th with Future of The Left at Music Hall of Williamsburg (QRO concert listing).  Their 2008 release, Freshkills, will be re-released by In Music We Trust in February of 2010, and the band is aiming to record their next album this December.  About the new album, singer Zachary Lipez remarked via email: "Musically, it’s a little looser and angrier than the last one.  Lyrically it’s about how everybody lies every time, anytime, all the time, to any dumb lying fucker who will listen.  And good for them.  I want it to be as emotionally face punching as ‘The Lion and the Cobra’ would be if it didn’t have that awful late 80s early 90s production.  And it won’t.  So it will be." And there you have it.