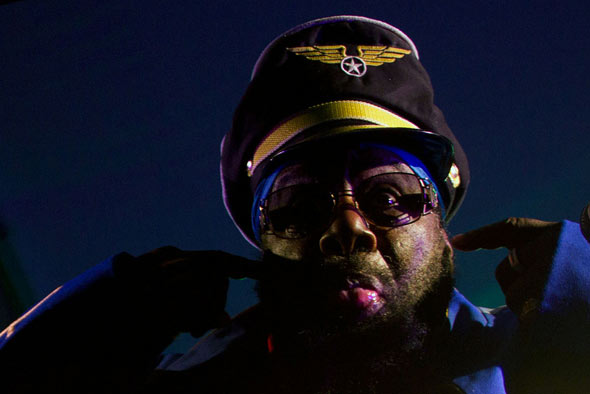 Click here for photos of George Clinton & Parliament/Funkadelic at 2018 LOCKN’ Festival in Arrington, VA in the QRO Concert Photo Gallery

Click here for photos of George Clinton & Parliament/Funkadelic at Queensbridge Park in Queens, NY on July 15th, 2015 in the QRO Concert Photo Gallery

A full year ahead of Paul McCartney (QRO photos the day before) and a couple months behind Bob Dylan, legendary funk musician George Clinton turned 70 to wide fanfare from the Beekman Beer Garden crowd on South Street in Lower Manhattan on Wednesday, July 27th.  Supported by Parliament/Funkadelic and God knows how many of its affiliates, cronies, and satellite-members, George Clinton somehow curated himself an intimate birthday bash unlike any seen before.  Catering to an older crowd dancing to tunes that still sounded remarkably fresh, the 20-some-odd musicians that rotated on and off stage throughout the night jammed and slammed through a long set made up of P-funk standards, guest appearances by Clinton’s son and granddaughter, and of course, the big man himself. 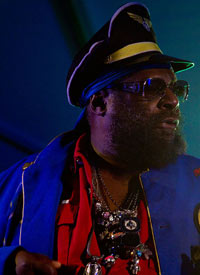 “You all probably came here tonight thinking you would see someone with rainbow-colored hair!” Clinton taunted his loving crowd after he made his fashionably late grand entrance three songs into an already-delayed set.  Famous for his and the rest of his P-funk fanatics’ theatricality, the big man wore a red shirt, a massive deep blue, sweeping overcoat sporting skulls-and-crossbones imagery, and a captain’s hat.  And the skipper is big, never realized how big, but his imposing was enough to keep the crowd entertained as he guided the band through hours of shredding guitar soloing, be-bopping saxophone and trumpets, hip-hop from Sativa Diva (the Granddaughter of Funk), and sexy dancing from female onstage support crew who seemed to get more and more naked as the night went on – no complaints.

Blowing through hits like “Flashlight” and “Give Up the Funk (Tear the Roof off the Sucker),” Clinton very much established with the show that he was here to stay with the nearly four-hour set into the night.