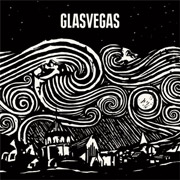 Glasgow’s Glasvegas broke through in a huge way in 2008 in their native U.K., with their self-titled debut reaching #2 on the charts over there.  Now it comes to the U.S., with two extra bonus tracks.  The band’s grand guitars and sound overall is compelling at first, but unfortunately they play the same way over and over again, except getting more emo in voice.  And the few times the group does depart for their playbook, it’s not to great effect.  Only the strength of their expansive guitars saves Glasvegas.

Opener “Flowers & Football Tops” and the following “Geraldine” do start off the record well, some grand Brit-rock whose heart doesn’t overwhelm them (“Flowers” is too extended), thanks to impressive guitar wash work.  But that might have been said about whatever the first few tracks were on Glasvegas, as the album begins to suffer from there, since the band does largely the same thing, over and over again.  As the vocals get more prominent, they get more preening, such as with “It’s My Own Cheating Heart That Makes Me Cry” or “S.A.D. Light” (not doing too well in the song-titling, either…).  And when the vocals pick up on “Daddy’s Gone”, Glasvegas unwisely limited their guitars, making kind of a whiney strum.

There are exceptions, as Glasvegas goes on – good, but also those not so much.  On “Go Square Go” and U.S. finisher “Everybody’s Got To Learn Sometime”, the band injects the pressing impact that the rest of the record needs.  But the ‘stripped to piano & voice in an empty hall echo’ “Stabbed” is a change, but otherwise unremarkable, and so is the original U.K. ender, “Ice Cream Van”, whose slow, sad keys sustain and low-volume talking doesn’t grip, even with the fuzzy-choral finish.  Right after that, first American bonus track “The Prettiest Thing On Saltcoats Beach” is not bad with its orchestra pianos & strings, but nothing special after the rest of the record.

After making waves in the U.K., many are expecting Glasvegas to do likewise across the pond.  But their grand Brit-rock is relatively paint-by-the-numbers (a wanna-be Doves or Snow Patrol – QRO album review), the kind of sound that’s successful over there, but is only pleasant, with limited impact, over here.