<img src="http://www.qromag.com/wp-content/uploads/2011/08/godisanastronautaug5.jpg" alt="God Is an Astronaut : Live" />It seems almost like an insult that North America has been bereft of one of the most well established instrumental... 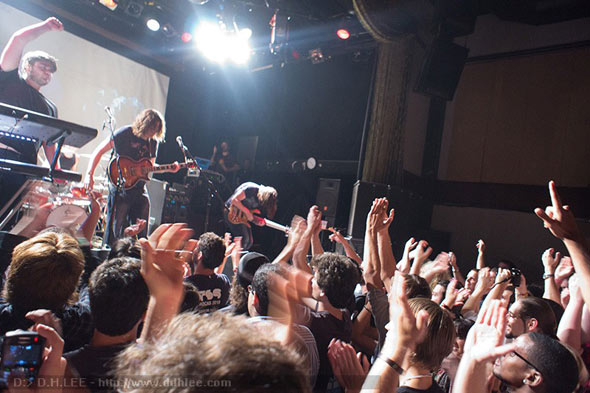 With almost 80,000 fans on Facebook and a plethora of tours country to country, it seems almost like an insult that North America has been bereft of one of the most well established instrumental post-rock groups still out there.  One could suggest it may have been apprehension however, as their last (and first) trip into the states had their equipment stolen on their return home.

Their second endeavor has not seen that same issue thus far, thankfully.  With Boston already out of the way and cheering for them, their second stop took them into New York’s Bowery Ballroom on Friday, August 5th to an audience of foreigners and locals who have been awaiting for this day for years. 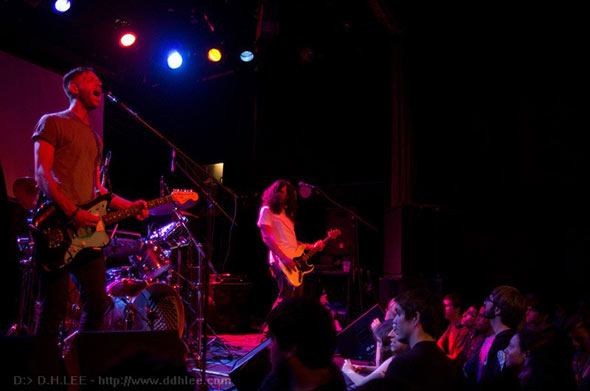 Click here for photos of Monogold at Rock Shop in Brooklyn, NY on February 12th, 2011 in the QRO Concert Photo Gallery 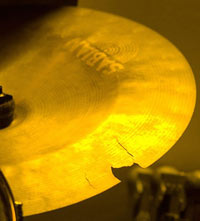 Opening to the band was local Brooklyn group Monogold, who have been following the band with the playful harmonics of soft chants, tight beats, and fast bass work.  The audience, seemed tentative at first towards their unconventional music, but soon warmed up to them as they showed off that they were chosen for this lineup for a reason.  As they finished their last song, the audience that was there had doubled and one of their cymbals had busted along the way between sets.  Before they finished, they lent one warning to the crowd about GIAA: it will be loud.  The warning only riled the audience up with anticipation as crew began to clear the stage to prepare for the main attraction. 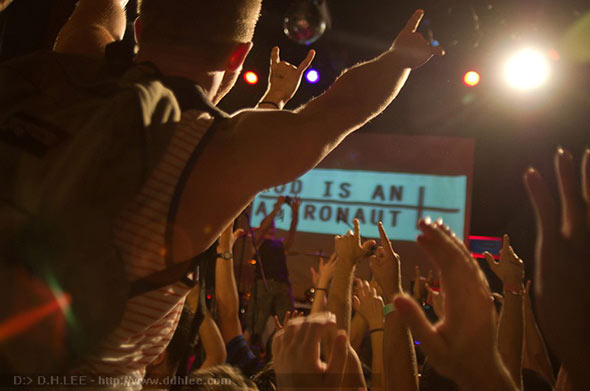 Soon, members of the band trickled in to loud fanfare as they began “Golden Sky” from their latest album, Age of the Fifth Sun: first keyboardist Jamie Dean stepped in as he created formless harmony key by key.  Vocalist/guitarist Torsten Kinsella arrived a few minutes in to slowly breathe life into the music with the low throbbing of his instrument.  Drummer Michael Fenton walked into the stage inconspicuously but soon revealed himself when he brandished his sticks and hammered a head-nodding beat into the mix before bassist Niels Kinsella arrived to complete their ensemble and drive the crowd into a frenzy. 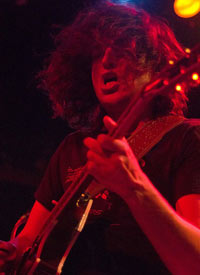 Although Bowery (QRO venue review) lacks the facilities to provide some of the more fantastic visuals one could see in previous concerts, the energy was still there.  Songs that came afterwards included their harder pieces like “Zodiac,” “Echoes,” “Worlds in Collision,” and “Shadows,” but they were not afraid to add some of the softer trance songs from their collection when a song was played in honor of Dean’s sister.

Halfway into the night, between the screams and cheers of a crowd drunk in the cosmic glow of their songs, a mosh pit broke out and fans danced and shoved to the frenzy of the music.  A photo of this event was taken along the way from a man who stepped on stage and crowdsurfed down.  There was a wild energy here that barely could be contained, but goodwill still held the audience together, as people helped whenever a mosher fell and care was taken when one of the moshers overextended themselves and got injured in the process.

By 11:20pm, the band had stepped away from the stage, but not before the audience cried in voices that could even challenge their heavy sound system: “One more song!  One more song!”  The band returned and offered one final piece before they called it a night and accepted handshakes from an ecstatic crowd addicted to the wild night.  With this being the second show of their tour through North America, it can only show just how much people have been look forward to their arrival and hopefully another return.