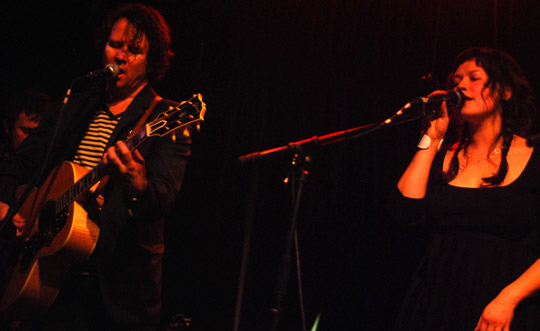 Solo singer/songwriter shows taking place in an intimate, coffeehouse-like atmosphere should generally be treated warily.  You have to strain to hear the artist, or get shushed for making a peep.  The musician is usually baring his soul, or at least trying to, which can be uncomfortable.  You get to sit, which is nice, but it’s not like you can dance, and the tables & chairs make for awkward moving around.  And, most significantly, the artist, alone up there on the stage (if there is one), can’t really put on much of a ‘show’, while his or her songs, all reduced to vocals & acoustic guitar, tend to all sound the same.

But forget about all of that when it comes to Grant-Lee Phillips. 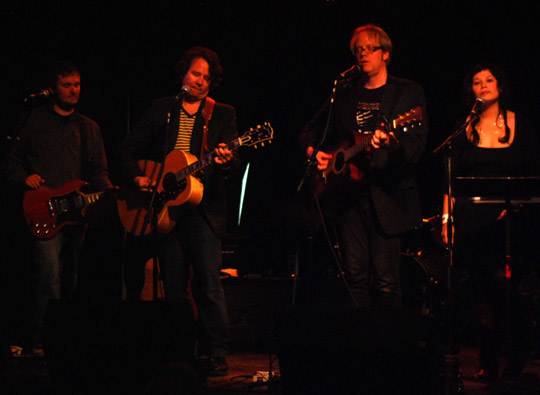 Click here for photos of Winterpills, with Grant-Lee Phillips, from this show in the QRO Concert Photo Gallery

During the opening set by tourmates Winterpills (QRO album review) at New York’s DROM on Wednesday, November 18th, the at-that-point-three-person act (“Our bassist & drummer are resting comfortably…”) invited Phillips on stage for a few songs, where Phillips joked about his striped shirt (“I just came from a mime gig…”) and donned his “prog-rock glasses” to match Winterpills’ singer/guitarist.  They already were both wearing blazers, so announced that they were a Proclaimers tribute band – even did a few bars of “I would walk five hundred miles”.  But when the Pills & Phil(lip) finished, the opening act walked off the stage, but Phillips stayed right there to start his headlining performance – no break necessary.

Phillips began with a few songs off of his latest, Little Moon (QRO review), including starting with the title track, and playing a particularly rousing rendition of “Good Morning Happiness”.  But after taking a sip & praising his Yuengling beer (“It’s like an essential oil…”), he gave a hilarious introduction to “Humankind” from 2001’s Mobilize, indeed to Mobilize altogether:

Little Moon stand out “It Ain’t the Same Old Cold War Harry” followed, but the evening soon shifted into Phillips’ extensive back catalog of music, first “Killing a Dead Man” from 2007’s Strangelet (QRO review), and then, “It’s time for a mighty song…”, a.k.a. “Mighty Joe Moon”, the title track from Phillips’ second record with Grant Lee Buffalo, his original three-man outfit, all the way back in 1994.  Or, as Phillips put it:

“I wrote that when I was like, ‘I’m gonna go out there and sing like Janis Joplin, and name myself after animals, and wear a big ol’ heavy coat in the middle of summer.  Yeah, that’s what I’m going to do…’” 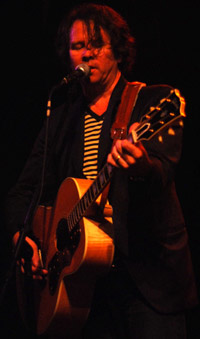 Phillips then proceeded to take requests – always risky, but it more than paid off at DROM.  The crowd was certainly very familiar with Phillips’ work, often clapping at the start of a song when they realized what he was playing.  The artsy, but very classy DROM (QRO venue review) definitely helped, with a real stage, and dining tables, lounge benches, and standing bar all with a clear view of Phillips, but not clustered.  There weren’t a ton of people there, and it was certainly an older crowd, but Phillips was so funny and friendly that he really took advantage of the intimacy.  To one request, he said, “That’s a hard one – it’s got a lot of words…”; to another, for a song about Halloween, “I can’t play that one after October 31st – it’s like wearing white shoes after Labor Day…”  And even when he honed in on Mobilize‘s “See America” (one he was probably already planning to play, given his affinity that night for Mobilize, and that the song is about getting lost in New York – even references nearby Union Square), right after he started, he had to thank David Bowie (QRO album review) for the chord change…

Phillips actually apologized for playing so many from Mobilize, “I got this new record out, but I got this urge to play off of Mobilize.  I gotta go where the muse tells me…”, but it let the night not feel like there was a stark ‘new song/old song’ divide.  For any artist with a lot of records like Phillips, the crowd naturally wants to hear older stuff, while the artist naturally wants to play his most recent material.  But Phillips handled it just right: starting off with Little Moon, before the crowd was in request mood, and ending with it, when everyone was so satisfied that they couldn’t ask for more.  And Mobilize played like a straw man, with Phillips able to apologize for, seemingly out of the blue, playing so much from it, while also reinterpreting and reinvigorating the songs in the new, solo set-up.

And Phillips did have a great little way of explaining why he was solo: 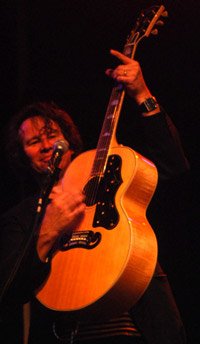 Asking for more requests brought out Mighty Joe Moon‘s “Honey Don’t Think”, but it was during the following “Raise the Spirit” (from Strangelet) where Phillips had to think on his feet, as his acoustic guitar’s connection to the soundsystem stopped working.  What did he do?  Phillips just raised his guitar to his mike, while the crowd kept the beat, and even sang back up.  “We’re all prepared for the Mayan calendar – we’re all prepared FOR THE END OF THE WORLD [voice suddenly deepened & boomed in the microphone].  Sorry, I channeled The Lizard King there…”

Phillips then invited Winterpills back on stage with him, and they all kept joking about the technical difficulties, “That’s what William S. Burroughs calls, ‘The Ghost In the Machine’…”  When a Winterpill whispered to Phillips, Phillips told the crowd, “He just whispered, ‘You ain’t got no phantom.’  That’s either technical talk, or something from Alan Ginsberg’s Howl.”  When asked if he had a battery in his guitar, Phillips replied, “That’s kind of personal…”  And they all riffed on much more:

Little Moon‘s “Seal It With a Kiss” followed (“After an all-new Smallville…” – this coming from the ‘town troubadour’ on that network’s Gilmore Girls), and another Mobilize number, “April Chimes” (obviously not date-dependent…), but one of the strongest songs, later in the night, had to be “Arousing Thunder”, from 1996’s Copperopolis (while in Grant Lee Buffalo).

Even if they missed a verse:

Phillips & Winterpills closed out with a cover of The Velvet Underground’s “Sunday Morning” and another Buffalo piece, “Truly, Truly” (from final GLB record, Jubilee).  They all left the stage, but a definitely-wanted-by-the-crowd encore brought them all back, closing out the night with Little Moon‘s “The Sun Shines On Jupiter”.

Given Phillips’ over-fifteen-year career, there were going to be a bunch of songs you wanted to hear, but didn’t.  The set was naturally weighted towards his solo work of this decade/century/millennium, and away from his Buffalo-era work of the last – and there was nothing from debut LP Fuzzy, despite a group of people requesting the title track, in unison (though Phillips praised the chorus way the request was made).  Probably wasn’t the right setting for “Dixie Drug Store” anyway, and couldn’t do a second ‘Jupiter’ song, “Jupiter and Teardrop” (QRO Music of the Spheres) – but he couldn’t spare (literally) a minute for Mighty Joe Moon‘s “Last Days of Tecumseh”?…

Grant-Lee Phillips, with Winterpills, playing “The Sun Shines On Jupiter” live at DROM in New York, NY on November 18th, 2009:

All the problems with solo singer/songwriter shows, Grant-Lee Phillips turned into strengths.  The volume was loud enough to be heard, but low enough that he could handle when it went out.  He engaged the crowd with humor & charm, not cudgeling them with emotion.  You could sit or stand; either way, you were relaxed – and could still get a drink.  And, most importantly, he put on a ‘show’, including varying and reinterpreting where necessary, with his personality and songbook. 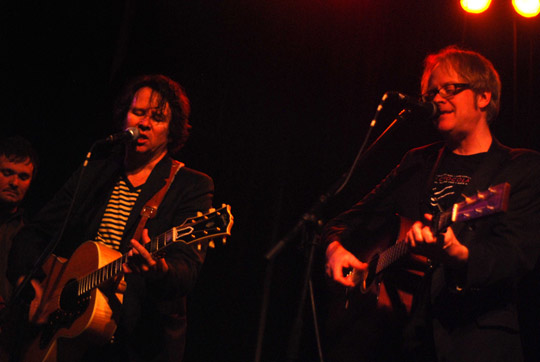