Dressed like she covered herself in glue and ran naked through some of the more '90s portions of Camden market, Grimes began the first leg of her European tour... 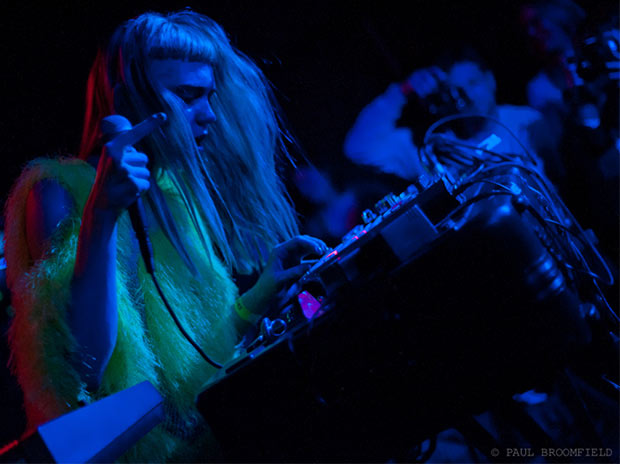 Click here for photos of Grimes at 2012 Primavera Sound Festival in Barcelona, Spain

Click here for photos of Grimes at 2012 Savannah Stopover in Savannah, GA

Click here for photos of Grimes at The Orpheum in Ybor City, FL on March 6th, 2012

Click here for photos of Grimes at CMJ 2011 in New York, NY

Click here for photos of Grimes at The Wiltern in Los Angeles, CA on May 31st, 2011

Click here for photos of Grimes at SXSW 2011 in Austin, TX

Dressed like she covered herself in glue and ran naked through some of the more ‘90s portions of Camden market, Grimes began the first leg of her European tour with a secret show Upstairs at the Garage in London on Monday, April 30th, beginning with some light chit chat with her adoring crowd, asking for moodier lighting and lamenting the bad quality of her equipment.  She got started with little more ado, and the youthful coyness she was displaying while talking to the crowd disappeared as her moody bass introduction quickly turned to something more rave-dancey.  This short track acted to set the scene, allowing the crowd to warm up before a simple tinny beat broke open into a big bass drum.

Things then turned a little animalistic (making her yeti coat seem all the more appropriate), with sounds that invoked jungle floor soon accompanying a pretty electronic xylophone melody and recognition from the crowd as a both cutesier and dancier version of “Oblivion” began.  Her small vocals – the gap between the effort she appeared to be putting into singing and the volume of what was received – added little to the sound of her live performance.  However, while it can be difficult for a knob-twiddler to put on a compelling show, the act of picking up her microphone felt like the performance equivalent of giving us eye contact, and brought the audience closer to her in other ways.

For “Be a Body”, Grimes began with a reedy vocal sample, and as she brought a Miami bass-line underneath it, we got more of the unsettling, subtle and ethereal sound she is perhaps better known for on record.   While enjoyed, it came to an abrupt end, for which she apologised, while seemingly struggling with her equipment.  It turns out that the weirdly encroaching photographers – who had managed to get so close to her that they must have been capturing no more than up-nostril shots – were the source of her unease, and she shooed them off the stage without qualm. 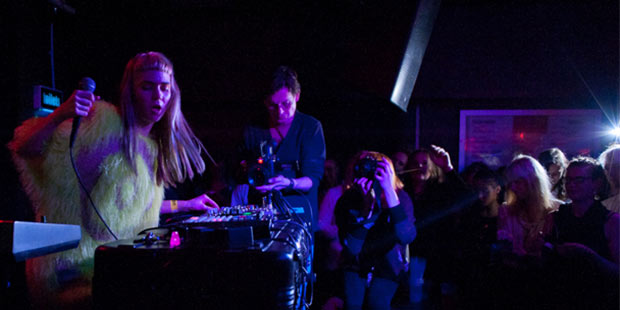 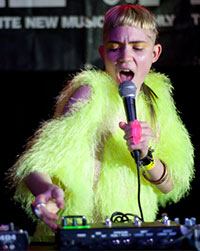 The cyber pixie then brightened up and a two-step beat began, and her voice was skewed and slowed above an ominous bass note.  With it came the electro-oriental intro to “Genesis”. With what seems to be becoming a frenzy of, frankly lovely, sounds, she ‘f***s up’ the ‘psychedelic jam’ that is supposed to mix into the next track.  After some sound tech-ing, she let out a little yelp as she ushers in the next song, an extremely ‘90s rendition of “Symphony IX” which brought her half an hour set to a civilised end.

The sound she presented was slightly one-dimensional, her slip of a voice often lost in da phat beatz when compared to its effect on her recorded music.  She was simply not as otherworldly in the flesh (it was disappointing that she had not painted a third eye on her face as she had on Jools Holland), and was unlikely to convert non-believers.  However, it was, despite hitches, a joyful performance, and those of faith definitely left feeling satisfied. 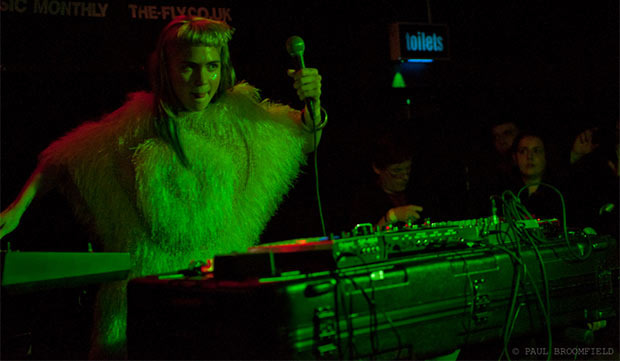 We Are Serenades : Criminal Heaven