Click here for photos of Heartless Bastards at Webster Hall in New York, NY on March 27th, 2009 in the QRO Concert Photo Gallery

Opening for a big band at a big place can be difficult: the fans up front (the ones the opening act can actually see from the stage) are super-psyched for the headliner, and sometimes have it in their head that the opener playing is what’s holding off the main act; the lighting and sound system can be great – too great, even, for a band not used to such high quality equipment; large places can be only half-full, with people still coming in and others wandering back to the bar; oh, and your set is naturally cut short.  But Heartless Bastards took advantage of their situation where they could, while overcoming difficulties when they had to, and gave a great set on Saturday, February 7th at New York’s Terminal 5.

Some factors did conspire to help the Bastards, but the biggest was of their own making: they were opening for labelmates (and fellow Ohioans) The Black Keys (QRO photos).  Drummer (and one-half) of The Keys, Patrick Carney, had discovered singer/guitarist Erika Wennerstrom, and got her signed to Fat Possum Records; over three records (and different sets of backing bands), Wennerstrom’s gritty, guitar-led blues-rock has played in the same sandbox as The Black Keys, which meant that the crowd of Keys fans were certainly going to have open ears, at the very least. 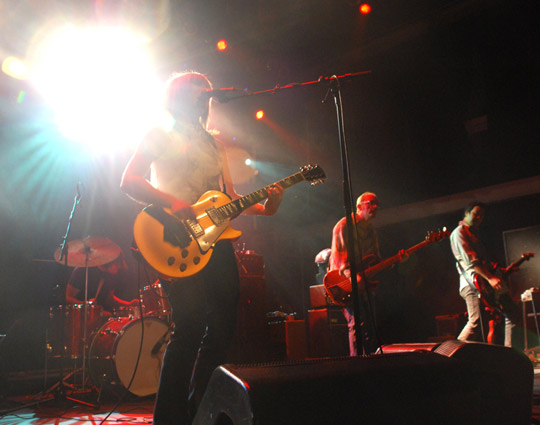 Wennerstrom also wisely refrained from much banter, given that she only had a limited amount of time on stage.  Despite having released a record that week, The Mountain (QRO review), Heartless Bastards drew liberally from the previous two, 2005’s Stairs and Elevators and 2006’s All the Time.  Starting with Stairs’s boot-rocking “Done Got Old” was still a pretty apropos choice, as the crowd wasn’t exactly thick with young hipsters (in the time between Bastards & Keys, there was a sing-a-long to the house music playing The Beatles’ classic “Come Together”…), while the following “New Resolution” took its interesting percussion and built further upon it with guitar.

Only after those two Stairs pieces did The Mountain come into view, starting with the record’s eponymous opener.  Wennerstrom took a more alt-country turn on her third full-length, but live, “The Mountain”s guitar-grind really shown through.  The garage-y “Out At Sea” followed, but it was with the jump back to All the Time where the set hit a high note, on “Searching For the Ghost”, which combined country-sway, garage-y, and grand.

Unfortunately, Heartless Bastards’ set did dip a bit after that.  “Hold Your Head High” is a strong, slow strum on The Mountain, but not perfectly suited for the large, rollicking crowd.  All the Time’s “Valley of Debris” was big enough for Terminal 5, but not gripping enough, while the same record’s “I Swallowed a Dragonfly”s more orchestral ways likewise didn’t quite fit the guitar-and-drum night.

But those were followed by three tracks that took a step-up live, starting on The Mountain with “Sway”, a laid-back number that just got more fun at Terminal 5.  Even more impressive in the stage setting was “Swamp Song”: on Stairs, the guitar garage piece is relatively unremarkable, but Heartless Bastards gave it new life and energy.  The darker alt-country/rock of The Mountain’s “Nothing Seems the Same” was still extended, but seeing Wennerstrom & co. up-down grind it out, in person, is just way more captivating.

And they ended on a high note with “Gray”.  The opener to Stairs is an easy favorite thanks to its upbeat blues-rock rhythm, and closed things out well.  It was too bad that the band couldn’t have found space on their set list (QRO photo) for a few more top Mountain tracks, like the pressing rock-thump “Early In the Morning” or epic alt-country/revival “Witchy Poo” – guess that’s for the headlining gigs.

There were some outside factors that played in Heartless Bastards favor, such as it being a sold-out crowd (and thus a packed Terminal 5 for them – and over-packed for The Black Keys), and these were of folks who don’t go to a lot of shows, thus weren’t as aware that the 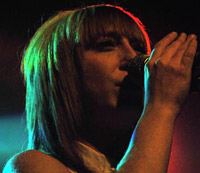 official, listed ‘show time’ is still a few hours away from the main band’s start (so many arrived early).  It was also the band’s second night at the venue, which gave them at least some experience at the massive place (like knowing to kick up the fog machine during “The Mountain”s chorus line of “When you see / Smoke there’s fire”), and they had switched their slot from the previous night with Lucero (QRO photos) to be the main opener, always the more desirable spot.  But Terminal 5 (QRO venue review) giveth, and Terminal 5 taketh away: the start time was early (especially for a weekend night), and they move like clockwork there, pumping bands in and out of the stage.  Plus, if you didn’t have a good spot way up front or right at a balcony’s banister, you were relegated to the teeming pit or trying to look over people’s heads (or through their legs) – a serious problem during The Black Keys.  Yet Heartless Bastards rolled with the punches, and jumped with the leg-ups, for a kick-ass night.