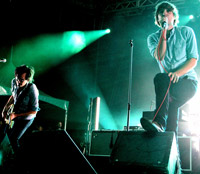 Phoenix entered to a blackened stage backlit and steaming with anticipation on September 18th.  The Hollywood Bowl was filled with a low drone, and out of it came the first jumpy notes of “Lisztomania”.  The crowd roared with excitement, and thus began the first night of Phoenix’s fall tour.  Their pump-up, indie-pop music is perfectly fit for the largest of venues.  However, the constant energy infused into almost all of their songs lost its punch after so many songs.  The explosive energy of the opening didn’t really let up and became a bit monotonous.  Amazingly, the band’s energy never faltered either.  The real shape of the Phoenix set was driven by the dazzling light show.  From almost all black to overflowing with white and then bursting with color, the lighting never ceased to amaze.  The design was a tasteful and imaginative evolution of light and color that more than augmented the music.  In fact, it might have even saved the concert from the upbeat sameness that makes up most of the Phoenix repertoire.  There was one very contrasting moment in the show when an acoustic set was taken up by singer Thomas Mars and guitarists Laurent Brancowitz and Christian Mazzalai.  To the crowd’s delight, the three of them marched their way to the middle of the Bowl and performed a couple intimate songs in the midst of the expansive audience.  The fresh energy of the opening finally returned but not until the encore.  The band made a good effort to diverge from the exact arrangements of the songs on the album by adjusting some parts mostly as transitions between songs.  And, it’s to their credit that the divergences were just as clean and well executed as the main bodies of each song.  There was joy and even a little child-like awe in the faces of the members of Phoenix as they gratefully accepted the fervent applause from their L.A. fans.

Click here for photos of Grizzly Bear at Pepsi presents StePhest ColbChella ‘012 Rocktaugustfest aboard The Intrepid in New York, NY

Click here for photos from of Grizzly Bear at Williamsburg Waterfront in Brooklyn, NY on August 30th, 2009 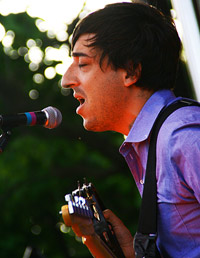 Grizzly Bear’s set preceded Phoenix’s, and they were received with almost the same amount of cheers.  Grizzly Bear, however, took the stage amid much less to do with the lights.  They performed their own line check and returned shortly to begin their set with only a small fading of the house lights to signal their entrance.  To much applause, they opened with “Southern Point”, the memorable first track of their most recent album.  There was not much to the four-piece band from Brooklyn in the way of showmanship, but they performed with a unified and solemn energy while each member held up his equal weight of the sound.  Whatever they lacked in spectacle they made up for in musicianship, which is what truly makes live music exciting anyway.  Their beautiful vocal harmonies were especially magical.  A big surprise was a special guest appearance by Feist (QRO live review), who joined them for a couple songs including “Two Weeks”, maybe their most well known song.  One would very much like to see Grizzly Bear headline L.A. soon with their own impressive light show, but with their music, an intimate club show would be just as grand. 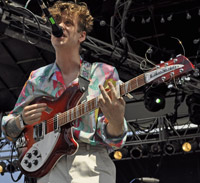 Girls held the first opener slot, and played to an appreciative though small crowd as the Bowl continued to fill in anticipation of Phoenix’s set time.  An equally unassuming entrance to Grizzly Bear’s began with a short introduction from the lead singer Christopher Owen’s “We’re Girls from San Francisco”.  Girls’ melancholy oldies/surf rock – which was something like a The Smiths meets The Shins (QRO live review) – is apparently influenced by Owens’ upbringing in the Children of God cult of which he is now no longer a member.  Owen and his band would be a great delight to see at a club, but their presentation was a bit hodge-podge for a large concert venue like the Hollywood Bowl despite the white lily floral arrangements on the mic stands, amps, and pedal steel.  Not sure if the morbid connotation was intentional or not, but a nice touch nonetheless.  Their presentation was only a small quibble though because their musical performance was nothing to talk down about.  Owens’ vocals were earnest with an attitude similar to Modest Mouse (QRO album review) while the band played a tight set full of old style rock ‘n’ roll drum beats and tremolo guitar.  A few poignant lyrics stood out during a couple songs including their single, “Lust For Life”.  With mostly clear and tasteful arrangements, the set took an unexpected turn later on in the direction of uninhibited angst with a loud fuzzy wall of sound issuing from the guitars, which made it sound like M83 (QRO live review) had hijacked their set.  The core oldies sound could still be heard underneath it all.  It was a short but killer set.  And, ultimately, it was a fantastic night at the Bowl.

Hanson : Shout It Out