Our hearts here at QRO leaped when we heard that iconic eighties punk act Hüsker Dü (QRO spotlight on) was releasing something for Record Store Day 2013, but it... 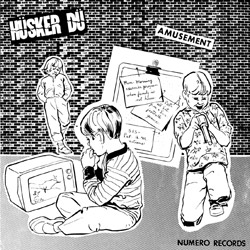 Our hearts here at QRO leaped when we heard that iconic eighties punk act Hüsker Dü (QRO spotlight on) was releasing something for Record Store Day 2013, but it was actually something old – very old, from all the way back to 1980 (to be fair, this review is coming near three months after Record Store Day…).  Way back then, Grant Hart, Bob Mould, and Greg Norton went into the Blackberry Way Studio in their native Minneapolis thinking that they were gonna record a seven-inch for local imprint Twin/Tone – only for Twin/Tone to instead sign their rivals, The Replacements (who did pretty well for themselves in the end…).  So instead the band put together a four-song 10″ – but fronting their own start-up costs forced them to reduce it to a two-song 7″, and even that would fall out of print as the band evolved from those very early beginnings.

Out of print until now.  Numero Group (which recently joined the Dead Oceans–Jagjaguwar–Secretly Canadian label group) has put together a remastered version of the original, intended, four-song 10″ (from the first generation sub-master; the originals have been long lost – back in a time where originals were easy-to-lose hard copies…).  It’s got guitarist Bob Mould’s dark kiss-off to Twin/Tone, “Amusement”, as well as drummer Grant Hart’s biting own kiss-off to aged scenesters, “Statues”.  Those two formed the eventual 7″, but also included on this is bassist Greg Norton’s punk-rollicking “Let’s Go Die” – and the never-before-released “Writer’s Camp”, a surprisingly bouncy piece from all three.

So no, there’s no Hüsker ReDünion on the horizon (though The Replacements recently announced one, so you never know…), but pick up this early slice of one of the most influential bands in rock ‘n’ roll.