We are never satiated and why the hell should we be?... 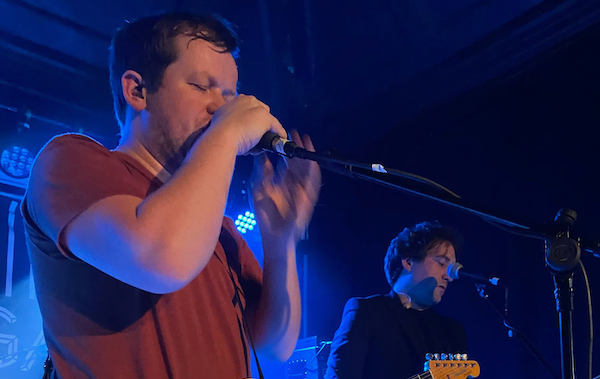 “Most bands want to be on stage, Joy Division had no fucking choice”

We are never satiated and why the hell should we be? What’s the problem with craving the new revolution and the birth of a new age of Aquarius? The holy sanctum of rock and roll should revolt not evolve, risks need to be taken to push back the barriers and achieve a new benchmark in this the purest of artistic genres. Do we have a right to demand or expect a regular cultural shift to fulfil our need for cerebral stimulation? Perhaps not, but we are blessed that the true mavericks take no heed of the possible consequences of a cataclysmic failure in their endeavours and move relentlessly on oblivious to whim and fancy, totally unabashed forcing their singularity of desire to create even in such a shallow and sterile domain.

The Tony Wilson quote can be interpreted as either a reinforcement of the Joy Division myth or as a demarcation and marginalisation of the seminal band with both outcomes seen as a triumph of Wilson’s manipulative marketing technique. Fast-forward to 2021 and the demands mentioned in the above didactic rant are being fulfilled by a profusion of new bands that themselves seem to have no fucking choice than to exist to create. Ist Ist have functioned in a vacuous environment of their own creation for what seems like aeons which unsurprisingly has allowed their artistic evolution time and space to flourish unimpaired. The result of which has found them at the forefront of a contemporary version of post-punk, a genre so ingrained in the roots of the four-piece’s hometown of Manchester that it’s become a part of the city’s DNA with the phantoms and memories of the Factory Records era and the subsequent swathes of grey industrial noise created by the city’s disaffected youth never being allowed to dissipate. The recent release of Paul Morley’s latest book, From Manchester With Love, a homage to the Factory Records impresario Tony Wilson only adds more mythology and lore to the city’s already burgeoning reputation.

The band formed in 2014 are currently touring to promote their second album The Art of Lying and appeared at the Bodega in Nottingham on the fittingly cold and bleak Saturday, 4th of December. The new album has all the fundamental constituents of the genre with metronomic drumming, glacial guitars and the bass as a lead instrument but the production compared to their debut Architecture has pushed the bands oeuvre towards an arena sized soundscape with the keyboards now contributing more than just texture and mood.

Click here for QRO’s review of I Am Lono at Chameleon Arts Centre in Nottingham, U.K. on February 28th, 2014

Click here for photos of I Am Lono at Bodega on January 25th, 2014 in the QRO Concert Photo Gallery

The evening began impressively with Nottingham based band I Am Lono, who have evolved from a synthesiser led duo, more Suicide than Soft Cell, into an eclectic four-piece since my last encounter. The viral lockdown seems to have benefitted their transformation with 2021 seeing a surge in their recorded output as well as regular appearances on the local gig circuit as both headline and supporting act. The original duo of Matt Cooper on keyboards and lead vocals and Dave Startin on guitar were well augmented with precise but understated drumming as well as simple and melodic bass lines emanating from the Rickenbacker. Highlights of their brief but passionate set were “Abigail” and “Lovers”, both from the Hunt Us Down Like Dogs EP, which closed with the dirty and sassy “Simone”.

Ist Ist took the stage to raucous applause at the sold-out Bodega social club and the instantly recognisable metallic noise onslaught signalled the opening track “Wolves” from their debut album, which coupled with a monotonal dissertation on the nonexistence of our deity yielded a melancholic aura that remained throughout the performance. The set consisted of a total of 17 tracks which included the majority of the new album and a good proportion of their debut. The tracks performed from their debut album such as “Discipline”, “You’re Mine” and “Black” were all integrated seamlessly alongside the current material, which gave the set a cohesiveness that could easily have been missing after their long recess from the live circuit. Given that many of the songs performed dealt with desire, confusion and the craving for redemption then the band’s on-stage demeanour was refreshingly humble and gracious, which again gave rise to the conclusion that the band’s need to express themselves and communicate are central to their tenet. Ist Ist find themselves at the forefront of a cultural lineage that was initiated over 40 years ago when David Bowie and Jim Osterberg hired a chateau in Northern France to not only write and produce but to detox from the colossal amount of narcotics they were ingesting. The resulting albums, The idiot by Iggy Pop and Bowie’s Low have set the benchmark in the post-punk genre ever since and if the performance at the Bodega was any gauge of Ist Ist’s longevity then I fully expect their sound waves to be radiating for years to come alongside the radio waves emanating from the neutron star depicted on a certain other Manchester band’s album sleeve.