“We’re known as a great live band. Even if you can’t expect your song, you’re still gonna have a great time.”... 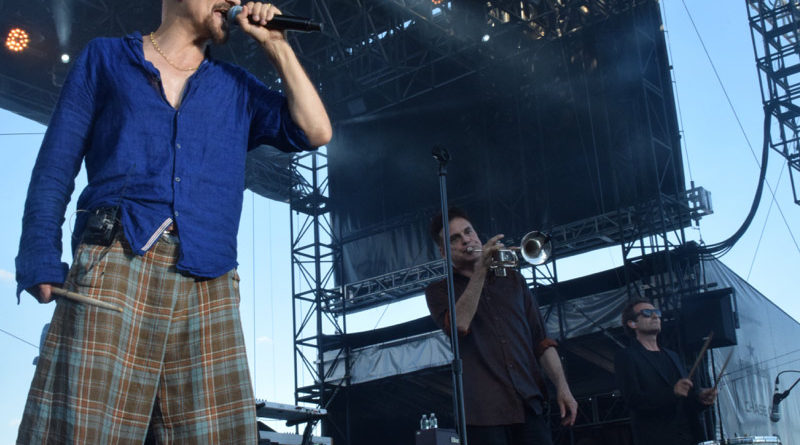 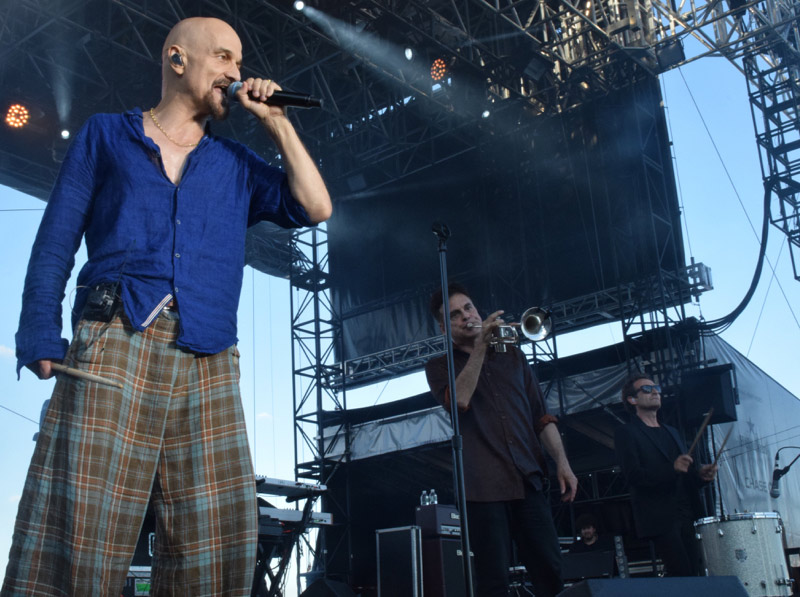 Click here for all of QRO’s coverage of James in QRO’s ‘Spotlight On : James’ feature

“We’ve been wanting to come out to America, but because of the size of our band, and how much it would cost, it was financially difficult to come on our own,” said James singer Tim Booth in a recent interview with QRO Mag. He also stated, “We’re known as a great live band. Even if you can’t expect your song, you’re still gonna have a great time.” And the many-membered Manchester act lived up to that when they played New York’s Rooftop at Pier 17 (QRO venue review) on Friday, July 12th.

First things first, this was a co-headlining tour with eighties John Hughes favorites The Psychedelic Furs (QRO photos), but because it’s America, The Furs headlined. And because it was an outdoor concert, things started early, with first opener Dear Boy (QRO photos) playing to a third-full sunny & hot rooftop at six. So James went on early, 6:50 PM, meaning there were those who were stuck at work didn’t make it in time (at least they didn’t have to deal with the following evening’s Midtown blackout…), and they couldn’t play the lengthy ‘full James’ one would get in the U.K. (QRO live review there). But it was still a wonderful show.

While their first time in America in five years (QRO photos in New York in 2014), James were touring behind last year’s Living In Extraordinary Times (QRO review), and definitely tilted towards that record. James’ set lists vary greatly, night-to-night, but Booth had said that they would be hitting up the new record (he also said that they’ve found a whole new fan base since their eighties/nineties origins, and that the younger fans like the new material – but touring with Pretty In Pink’s Furs, this crowd definitely leaned older). Their set opened with Times’ dark Trump kiss-off “Hank”, dedicated to “A famous New York resident, who’s inspired many people – in many ways…” 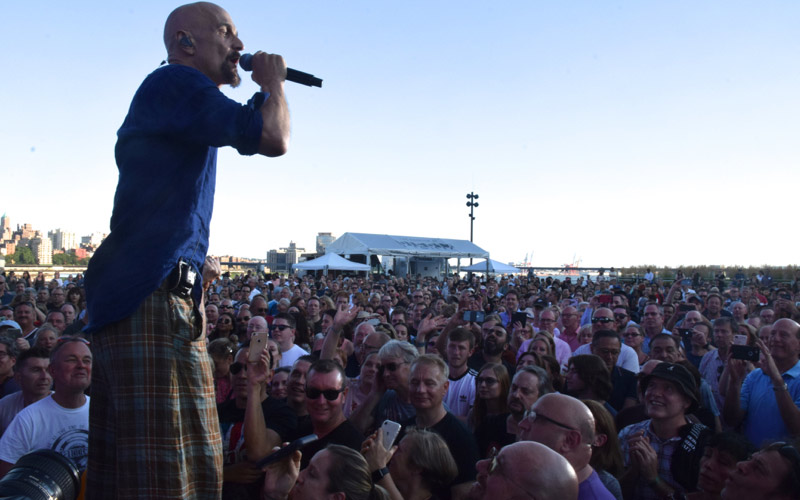 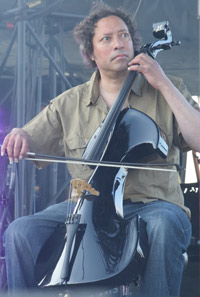 It was a bit of an odd way to start under the still-sunny skies, but then went, “From hate, to love, in one song,” with Times’ “Leviathan” – with which Booth went through the photo pit to stand on the barrier, a fan & security holding up (and sending photographers scrambling – poor guitarist Adrian Oxaal had no one looking at him as he busted out his cello…]. This was done both on the center-left and center-right of the crowd, with one older fan who held Booth up (pretty much on his own) celebrating right afterwards, “I touched Tim!” The ‘sing right on the crowd’ move is a tricky one, and not just in the physical balancing act (the barrier’s railing was round), but in that one needs the crowd to be up for it, to give the singer energy to feed off of, yet Booth & the audience were in fine form. 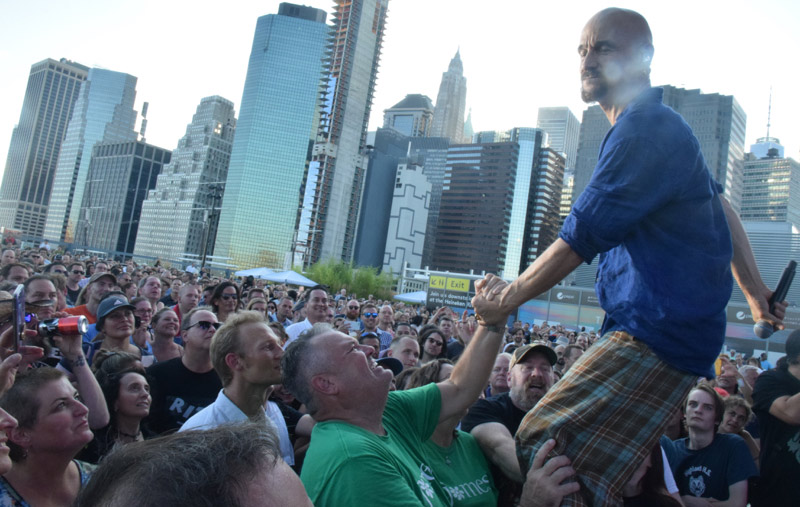 This is America, and one should really play your hits that got you big way back when (The Psychedelic Furs certainly did…). When last in New York, James didn’t play “Laid”, their early nineties alt-hit in America (back when Booth was the boy with curly brown hair, not the man with a shaved dome & devil’s beard – video). For this show they did – early, in only the fourth song. “You can tell all the latecomers they missed it. We were gonna open with it, but we were worried there would only be a few hundred people.” And the song was still, “On fire, with passion & love.” 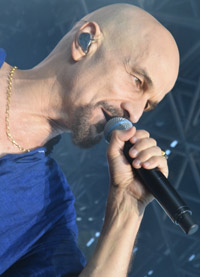 One could have expected that that would be it from Laid, but after another album title song, the much more recent “Extraordinary Times”, Booth & the band debated which of two Laid pieces to play, “P.S.” or “Five-O”. Both are slower, darker songs, maybe not exactly designed for the setting, but beautiful, and couldn’t go wrong either way (went with “P.S.” and its violin). The evening wasn’t just Laid & Times, either. With decades, over a dozen records, and something like three hundred songs under their belt, James could also pull out their “wedding song,” “Just Like Fred Astaire” from 1999’s Millionaires.

The band returned to Extraordinary Times with, “Another song inspired Donald Trump, and his talk of building a wall, and his racist comments about Mexicans. This is a song of unity.” “Many Faces” is indeed the “summation of the record,” a lovely celebration of diversity & unity, and the crowd carried the chorus of “There’s only one / Human race / Many faces / Everybody belongs here” as Pier 17’s impressive video cameras panned over them and broadcast the faces on the big screen (okay, mostly white faces, but still…).

James stayed with Times for the darker “What’s It All About”, with Booth on megaphone for the title chorus line. The balance between light and dark has long been essential to James, who more than most know how to shift between the two in the live setting, instead of relying on the bright pop songs and only slipping in the moody sad numbers. 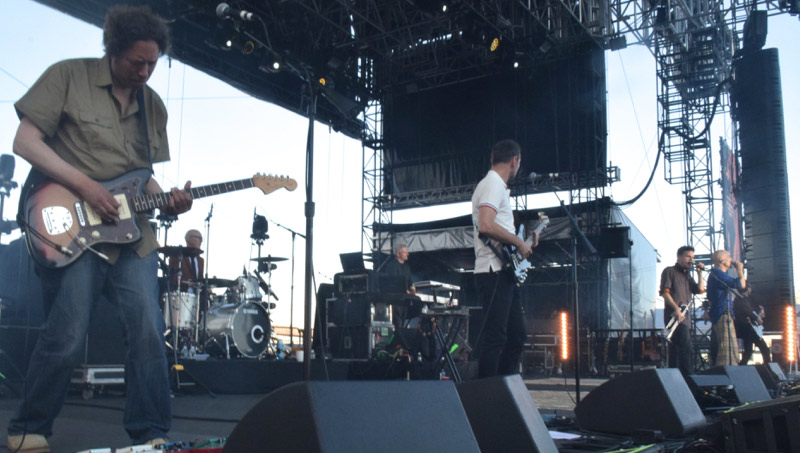 And return to upbeat is what James did with Laid’s wonderful “Sometimes (Lester Piggot)”. As good, or even better, than “Laid”, the celebration of life amid a thunderstorm hit particularly hard on Pier 17 (thankfully, there was no rain at all that night), carrying everyone along – literally, in the case of Booth, who after checking earlier on with the crowd about possibly going in there (“Will you catch me? Will you put your phones away? Can’t catch well one-handed – cyborgs don’t catch well…” “I’m a man of a certain age, so treat me like a Ming vase, or some special antique…”), did so in this piece, while still singing, mike chord trailing behind him.

[note: Unfortunately, security was being tight about the photo restrictions all night, from only being able to shoot Furs from the back of the house to stopping your correspondent from even taking a camera phone photo of Booth held aloft, so no visuals…] 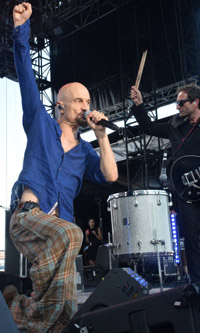 One of James’ most popular songs back home, as opposed to in fickle America, is 1991’s “Come Home” from their self-titled album, an anthem even if it’s about being away from home too long. Times single “Coming Home (Pt.2)” is a sort-of sequel, Booth singing to his child from the road via Skype (didn’t have that in 1991…), but it was the original that the band played in New York.

And after joking that the crowd needed to pretend that the band had left the stage, and come back for the encore (“We don’t want to waste two minutes”), James closed with “Getting Away With It (All Messed Up)” from 2001’s Pleased To Meet You, a more expansive anthem whose chorus all were singing as they left to go to the bathroom (or just leave entirely, which would have meant missing the Pier 17 credit card system going down during The Psychedelic Furs…).

“We do a different set list every night. It’s how we’ve stayed a band these many decades. It means you’ll get a performance no one else will ever get. But sometimes it means you might not hear your favorite song. So just see if you can live in the moment.” As Tim Booth said, James provided a special performance for all those lucky enough to be there. As always. 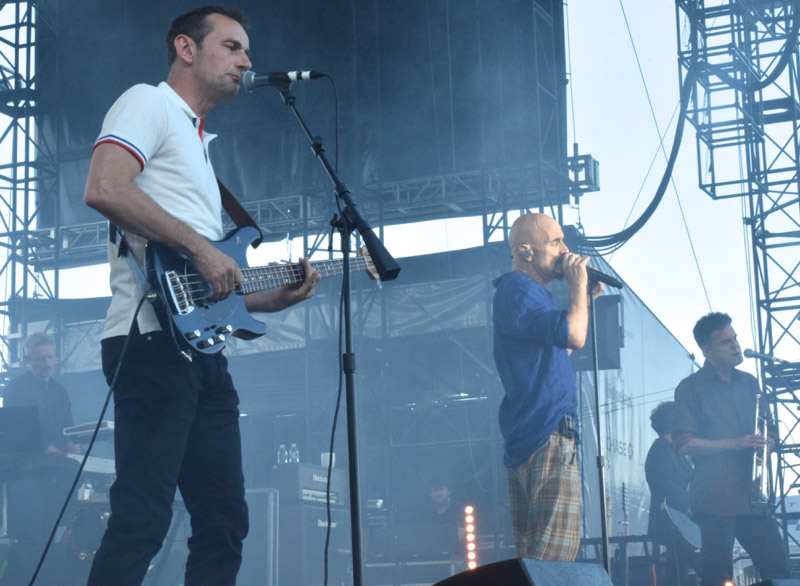