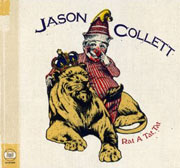 Few artists have remained as consistent over the last decade as Jason Collett (QRO interview).  The talented Torontonian has collaborated with some of the best artists of his generation, both in bands like Broken Social Scene (QRO spotlight on), and in more impromptu settings like Toronto’s ever popular Radio Monday’s.  Collett has long since split from that team environment, and instead has found the way back into the spotlight on his own.  Returning with his signature twang, Collett’s solo project shows its continued evolution with the release of his fourth album, Rat A Tat Tat.

The alt-country troubadour appears at times as simply a witty writer using playful melodies to convey whatever feelings come to mind.  Such a sense of simplicity is unconditionally set aside though, when the deceptively potent number “Long May You Love” takes you by storm.  The message, the music, and the atmosphere ravage you with an enveloping positive feeling.  Rat A Tat Tat is at its best here, and on the fun loving, conflicting single “Love Is a Dirty Word”.  Whatever track you turn to, catchy electric guitar is sure to be found.  Add in thorough percussion, imaginative bass lines, and some steady hands on piano and you arrive at the core of the album.

Click here for photos of Jason Collett at Mercury Lounge in New York, NY on April 10th, 2008 in the QRO Concert Photo Gallery

The atmosphere on Rat A Tat Tat does sway at times – like the ukulele on the lighter “Cold Blue Halo”, or the distortion on mysterious sounding “Winnipeg Winds”.  Overall though, Collett has crafted a laid-back, almost nostalgic feeling on the album, which is most enjoyable.  As a lyricist, Jason has continued to develop, as is visible in the strong imagery throughout.  His writing also shows a blind optimism that fits well in the easy-going nature of the record.

Joined by a nearly identical cast as 2008’s Here’s To Being Here (QRO review), Collett has reinforced the change in environment from a jam record with friends to that of a serious, full-fledged project.  Reappearances by Andrew Whiteman (a.k.a. The Apostle of Hustle – QRO spotlight on) as well as Tony Scherr (QRO photos, on the bill with Collett) and Liam O’Neil of The Stills (QRO spotlight on) are all the added touches that the album needs.  Light and airy, hopeful and optimistic, Rat A Tat Tat is the perfect soundtrack for heading off into whatever spring holds for us.

MP3 Stream: “Long May You Love”

We Were Promised Jetpacks