<img src="http://www.qromag.com/wp-content/uploads/2012/04/jeffmangumapr19.jpg" alt="Jeff Mangum : Live" />It's easy to see how the proliferation of nation-crossing nostalgia revues could have drawn Jeff Mangum back onto the stage, if only... 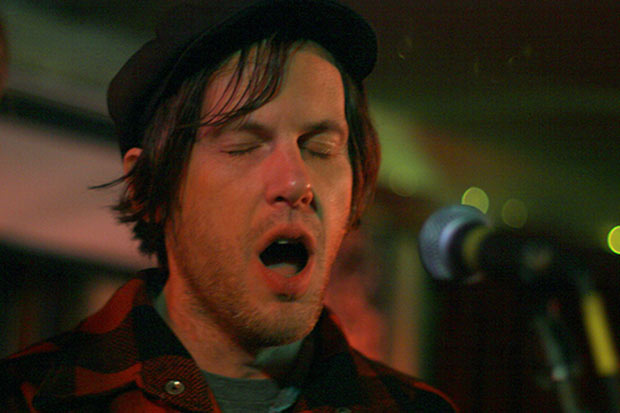 While Jeff Mangum’s audience is hesitant to draw a connection between the singer’s return to live performance and a retro-manic cultural moment (which, with Tupac Shakur’s recent outing as a digitized Pepper’s Ghost, may have reached a retro-futurist pinnacle), it’s easy to see how the proliferation of nation-crossing nostalgia revues could have drawn the singer back onto the stage, if only (as always) in marked contrast to his peers.

By and large, classic-lineup and landmark-album-specific tours can be seen an opportunity for musicians to reinsert themselves into the ongoing relationship that listeners have with recordings.  In live performances, musicians can reclaim songs that their audiences may have long declared public property, re-establishing and re-monetizing the link between song and singer.

Mangum’s recent performances seem to be doing something different.  By appearing under his own name and presenting his songs plainly, he is deliberately undermining the mystique that has formed around the Neutral Milk Hotel (and it’s worth remembering how anonymous that name sounded when you first heard it) and offering the compositions to his audience practically as demos to be torn down and rebuilt, re-orchestrated and re-interpreted in each mind.  This music, so highly charged with personality on record, seem as implacable in this setting as anything drawn from that well of human experience frequented by Anne Briggs or Huddie Ledbetter.

Expectations were clearly high at Thursday’s show in Portland, at Crystal Ballroom on April 19th, and the crowd chattered excitably during Andrew, Scott & Laura’s opening set, applauding thunderously between numbers.  Closing with a particularly rueful “It Was a Very Good Year”, the group cleared off and a low wooden chair was quickly brought out and positioned at center stage.  With the appearance of that chair it became immediately clear that very few people in the audience would command a view of its imminent occupant.

As audience members trying to better their line of sight engaged in some futile reshuffling, a cover version of Richard Hell’s “Time” played over the PA.  Those not jockeying for position could mull over the words Hell sings in the original: “Only time can write a song that’s really, really real / The most a man can do is say the way its playing feels.”

Apparently taking Hell’s words to heart, Mangum appeared on stage with no greater fanfare than a cheery wave and immediately assumed the role in which he would spend the evening: that of a folk singer offering renderings of music from a nearly lost era passed down to him through countless intermediaries.  On the rare occasion that he offered an idea about a song’s genesis – suggesting, for instance, that the first encore, “Engine”, evoked or was inspired by a ballroom like the Crystal – his interpretation was presented as one among many and by no means definitive.

The set was organized like a Neutral Milk Hotel mixtape sequenced by a fan for a newbie, with irresistible clusters of hits (such as early-set highlight “Holland, 1945” followed immediately by On Avery Island‘s classic “Song Against Sex”) interspersed with the mandatory b-side and cover (“Engine” and Daniel Johnston’s “True Love Will Find You In the End”, respectively).

As Mangum continued to insist that the audience join him in song – and not just for refrains but for entire careening, twisting verses rife with novelistic imagery – and as the house lights continued to periodically illuminate the room, blinding audience members to the stage, those who had been craning their necks for a look at Mangum began to ease up.  In body language, you could see the music and the experience being internalized.  A young man who had cruelly yelled, “You can do better,” following “Song Against Sex” could, by “Ghost”, be found with his back to the stage, his eyes closed, rhapsodically singing harmony to Mangum’s lead.

“Naomi” and “Two-Headed Boy” completed the main set and, after a waltz-time encore concluding with a sing-along to “In the Aeroplane Over the Sea” and the final raising of the house lights, a guitar could be heard somewhere amongst the filing-out crowd.  Wherever that instrument is now, it’s hard to imagine that it isn’t strumming something hatched from Jeff Mangum’s brain, now loosed upon the world.